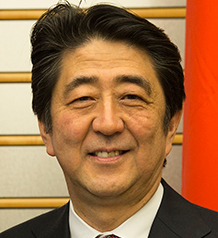 Shinzo Abe was elected Prime Minister in 2012, marking his second tenure since the 2005 election. Upon graduation from the Department of Political Science at the Seikei University Faculty of Law, he initially worked at Kobe Steel, Ltd., although his distinguished political career began in 1982 with his appointment as Executive Assistant to the Minister for Foreign Affairs. Other senior positions held have included Director of Social Affairs Division, President of the Liberal Democratic Party (LDP), and Chief Cabinet Secretary.

Share on:
Shinzo Abe, Prime Minister of Japan, on working together with Kazakhstan to achieve higher levels of economic integration, educational exchange, and achieving mutual goals.

In the past two years, I have met with President Nazarbayev three times at international conferences, but the visit this October was my first to Central Asia. During my visit, I had a three-point message. First, Japan will dramatically strengthen its relationship with the nations of Central Asia. To do so, Japan will help make the region’s industries more sophisticated and develop human resources. We want to climb the value-added ladder. We want to diversify our industries.

Going forward, Japan will continue to emphasize empowering the people of Kazakhstan as individuals by strengthening the power they already have. As a new initiative, Japan will support the training of people to lead advanced industries in Kazakhstan and other nations of Central Asia by making use of Japan’s high-quality engineering education. Secondly, Japan will more actively involve itself in efforts to resolve challenges faced universally by Central Asia.

We have been engaging in Central Asia-Japan dialogue since 2004. We believe that if an issue calls for a regional solution, then Japan can be a “catalyst” that all parties trust. This dialogue is developing into a framework for the nations of Central Asia and Japan to tackle challenges faced universally by this region.
Furthermore, Japan is ready to help make it easier to move around people and goods, which is a critical challenge that must be achieved if Central Asia is to attain further development. This is another area in which we are extremely interested.

The Central Asia plus Japan Dialogue and a meeting of foreign ministers from this region and Japan will be held next year with transportation and distribution as one of their main themes. We are hopeful that discussions on this theme will deepen in the run-up to these events.

Kazakhstan intends to establish an external aid organization, and Japan International Cooperation Agency (JICA) has an abundance of experience in this field. I am looking forward to the day when Japan can work with Kazakhstan in promoting the development of this region. Japan is hoping to make active contributions to the development of the whole of Central Asia while carefully listening to each country’s needs.

We would like to deepen the partnership between Japan and Central Asia on the global stage as well. The International Science and Technology Center, which is engaging in the initiative to prevent brain drain from the former Soviet republics in order to ensure nuclear non-proliferation, made a fresh start here at Nazarbayev University this summer. Japan will continue to support this institution’s activities, which have now continued for more than 20 years. We would like to work with Kazakhstan at the US as well, in order to push for nuclear disarmament and non-proliferation as well as the reform of the Security Council.

Although Japan and Central Asia are far apart geographically and have different historical backgrounds, huge possibilities lie ahead for the future of our partnership. If we accept each other and take advantage of each other’s strengths, and if we join our hands and work together, we can make our future shine more brightly.
I intend to immediately start making efforts to realize such a partnership. By sending a cultural exchange mission to Central Asia, or alternately by inviting Japanese-language learners from Central Asia to Japan, we will give force and energy to this endeavor. On the map, we are far apart, though distance does not matter when we are united in heart. To all of the people in Kazakhstan and other nations of Central Asia, I would like to say this: let us join our hands and move forward together toward the future.