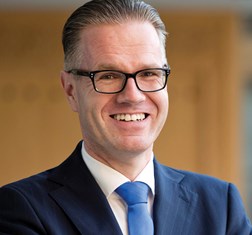 Looking to the Future

Dr. Bernd van Linder joined CBD in 2017. He built his career at ABN AMRO, before moving to Saudi Hollandi Bank as General Manager for Treasury and eventually becoming CEO of the same bank in 2009. He has a wealth of experience in all aspects of banking and an excellent track record in leading strategic change processes. He holds a PhD in artificial intelligence from the University of Utrecht, the Netherlands, and an MBA in financial management from the University of Bradford, UK.

Share on:
TBY talks to Dr. Bernd van Linder, CEO of Commercial Bank of Dubai (CBD), on the bank's contribution to the growth of Dubai, its efforts to go fully digital, and the importance of banks partnering with fintechs.

How do you assess CBD’s contribution to the development and growth of Dubai over the past decades?

In 2019, CBD will celebrate its 50th anniversary, which makes it one of the first local banks established in the UAE. Our contribution to the growth of Dubai has been substantial. Many of our clients started out with us as small companies and are today large conglomerates. Moreover, CBD has financed or provided banking services to many of the projects that were crucial to the development of Dubai. In addition, CBD has played a key role in the development of local talent and has an ambitious graduate recruitment program, where we hire fresh UAE graduates every year with the plan of offering them a career in the bank. Even if not all of them stay with us, we are proud to deliver well-educated and well-trained graduates to the market at large.

How do you assess the progress the banking sector is making with digitalization?

Dubai and the GCC at large are well advanced. Digital apps in this region are as good or even better than those found in international banks. Moreover, this region is far ahead of the West in terms of ATM functionality, as users can pay utility bills or participate in IPOs through ATMs. Mobile penetration in general is high, though mobile banking still lags somewhat behind countries such as Sweden or the Netherlands, where almost no one goes to bank branches anymore. In early 2017, we launched CBD NOW, the first digital-only bank in the UAE, and despite its success, we decided we needed to do better. Rather than launching a digital bank, we wanted to make the whole bank digital. We firmly established becoming digital as a key target for the bank and made excellent progress over the past year. The biggest challenge in digitization is the end-to-end process. Offering a digital front end is easy, however, the challenge is making existing processes digital: zero touch, paperless, and real time, straight through.

How do you view the impact of fintech on the banking sector?

Fintech has successfully changed people’s user experiences, and people now expect something similar to come from banks. However, most fintech applications are still built on a banking infrastructure, and there are only a few fintechs revolutionizing the core banking infrastructure. Blockchain will play a major role going forward in sharing documents in a secured way, though I do not see it playing a major part soon in massive real-time operations like cross-border payments. Artificial intelligence and machine learning will play an extremely important role in areas such as fraud detection and compliance, though the marketing approach of companies will also change completely once machine learning is fully deployed. Regional banks are not too far advanced in this field and have to make up ground with the international banks that are absolutely stunning in that space. The endgame for fintech companies will be amalgamating with banks, because they are natural partners. This will happen through partnerships and investments between banks and fintech players, and creating an environment in which they can assist each other.

How can Dubai further work toward its goal of being the preferred investment destination for foreign capital in the context of Dubai Plan 2021?

If we look at ease of doing business here, it is by far the number-one destination in the Arab world. And the supportive, well-functioning, and transparent government is a big factor in this. Many helpful laws and regulations have been introduced, including the bankruptcy law in 2017 that was a big step forward. The geographical location helps, because Dubai is a natural hub between the west and east. If we combine all that and look at the initiatives the Dubai government has taken to enhance the competitiveness of local business, we have a great starting point.