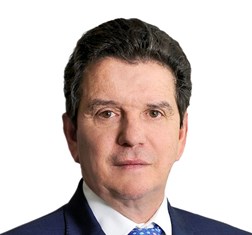 Luis Miguel Morelli is an Attorney at Law from the “Universidad Externado de Colombia“ with a Master’s degree in Comparative Law – MCJ from New York University (New York), and Macroeconomic Policy and Planning Studies at Northeastern University (Boston). He has worked in various positions in oil companies for 28 years: four in Ecopetrol, 14 in Occidental de Colombia, six in Azabache Energy and four as a member of the Board of Director of Solana Petroleum, Petromagdalena and Azabache Energy. During his almost three decades of corporate work, he stood out for playing several roles related to Oil & Gas contracts, environmental law and indigenous community’s management. He was elected by popular vote as Governor of Norte de Santander, a position he held between January 2004 and December 2007. His work was highlighted on several fronts: he took first place in fiscal management in 2005; he was National Culture Prize in 2007; built 40 irrigation districts in the four years, the same number that the department had in its 97-year history; significantly recovered the department’s energy mining sector; and had timely management of relations with its neighbors of the State of Táchira, Venezuela, among others. After completing his responsibilities as Governor, Morelli returned to the hydrocarbons sector, this time as an advisor and member of the boards of directors of several Canadian oil companies. Currently, he holds the Presidency of the National Hydrocarbons Agency since September 20th, 2018.

Share on:
“We need to be the most competitive country in the region and to have the best E&P model contract for investors.“

How do alliances with institutions such as Dimar continue to increase the scientific knowledge of the national maritime territory and the development of off-shore explorations?

What is your perspective of the project to be carried out in the Colombian Atlantic for the deepest offshore well in Latin America?

In 2018, we found that the former government had spent three years negotiating the E&P contract model for offshore. There were four matters that did not allow the companies to accept that E&P contract model. We quickly decided to just face them, and with the support of President Duque’s high consultant, we carried out our program to get the model approved by the Board of Directors of ANH. Immediately, we started to sign contracts and form the conversions for the technical agreement in the E&P contracts for the development of the real exploration in the drilling program and also for the terms and conditions of the production phase. In that way, at that time we received the commitment of big companies like ExxonMobil, Repsol, and Shell. We were fortunate to materialize the entry of an important worldwide off-shore operator, Noble Energy. Right now, it is committed to drilling the deepest well in the Caribbean Sea. We are also providing support to obtain the environmental license that will allow them to spot the well in the first week of June 2020. Now, we have six contracts signed for E&P in the Caribbean Sea plus seven contracts that were assigned before. In our administration, we signed investment agreements for USD140 million in two exploratory wells that will not be as deep though they are still important exploration wells. Ecopetrol and Petrobras will drill them in 2020. Those seven contracts currently represent an investment of USD1.8 billion for the next three or four years for the two initial phases of the exploration period of the contracts. We want to open a new province for oil and gas extraction. It is mainly expected to have gas, though companies are also expecting to find liquids.

What is your interpretation of the arrival of multinationals such as Petrobras or Oxy to carry out these offshore actions in the Colombian territory?

It is important for us to confirm that those major companies and major worldwide players are interested in Colombia. The projection of our Caribbean Sea will be confirmed when those companies arrive. If those five or six companies are committed to investing more than USD1.8 billion in the next three or four years, that means they see something interesting in our Caribbean Sea, and we are extremely pleased to have them. The technology and the capital that they can allocate in Colombia will be important for the development of the new gas province.

What are ANH’s goals to further boost the reactivation of the oil and gas industry?

There is no unique recipe for the reactivation of the oil and gas industry in Colombia. The first and urgent measure has been taken, and now we have those commitments in exploration. Some adjustments to the regulation to agreement number 2, 2017, the regulation of oil and gas in Colombia are yet to be made; some of which include the opportunity for small and medium-sized companies to come to Colombia. It consists of coming back to the original inauguration of the oil and gas policy in Colombia, back in 2003, when ANH was created. We want small companies that can bring small investors, between USD6 and 12 million, to reactivate fields that have been closed because of the non-economic rewards for large companies. It is expensive for Ecopetrol to produce a field with 300 or 400bpd; many of those fields are in the hands of Ecopetrol but ANH has some fields that we want to put out again for the investors. Before doing so, we need to modify the regulation because there are extremely high requirements for companies to work in Colombia. Also, when the oil prices fell, there was a big consolidation of companies with experienced professionals. Those companies, being new, are not allowed to participate in the oil and gas business in Colombia. Now, we want to modify the regulation to allow those small companies to participate in small projects. We will be close to increasing production to 15,000-20,000bpd by the end of 2020, which is important for Colombia. It is a solid percentage of the production year in Colombia. We need to be the most competitive country in the region and to have the best E&P model contract for investors. We also want to be the country that supports investors the most, not only being a regulator but being a real, strategic partner going with the companies to the regions and solving problems with the communities. We want to resolve the environmental processes and permits and support companies to get them to comply with the commitments of the contractor. Now, the idea is to go worldwide to make the promotion of the country in areas or in places where we have never been. Generally, investment from Canada or the US was enough. The real engine of the oil and gas industry in Colombia has been TSX in Canada. However, now, we need to go to China, India, Russia, Australia, and the Middle East like Dubai and Abu Dhabi. That is the challenge for next year. We need to be global, showing that we have the best terms and conditions and the best E&P contract for investment. We must also take advantage of the political problems in Venezuela, Mexico, Argentina, Ecuador, and Bolivia.