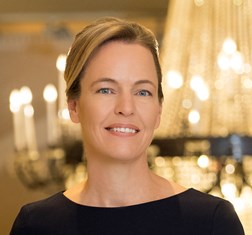 Dagmar Symes graduated from the prestigious Ecole Hotelier de Lausanne and pursued her career path in a steady pace until she was nominated as General Manager of the Chateau Grand Barrail in Saint Emilion, member of the Small Luxury Hotels of the World. Besides her established sound experience in the luxury hospitality sector, she also possesses a wealth of knowledge in the luxury retail business. For over 12 years, she held senior management positions in the retail business with international luxury brands such as Louis Vuitton and Bulgari, uplifting her profile as a true specialist in the high-end market.

Share on:
€‹TBY talks to Dagmar Symes, General Manager of Phoenicia InterContinental Hotel Beirut, on upcoming projects, spreading positivity in the face of adversity, and catering to MICE bookers.

How do you reconcile your modern vision of the Phoenicia with its storied past?

Since its opening in 1961, the Phoenicia has been recognized as an elite destination, with 446 luxurious rooms and suites, wide choice of restaurants, shops, and two swimming pools. Kings, queens, world leaders, celebrities, businessmen, and the jet-set alike have all made Phoenicia Hotel their home away from home and played a pivotal role in the country’s golden age of the 1960s and early 1970s. After years of closure due to Lebanon’s tragic war, Mazen and Marwan Salha, Chairman and Member of the Board of Directors of “La Société des Grands Hotels du Liban” respectively, decided to rebuild Beirut’s “Grand Dame” of hospitality. Much like a Phoenix rising from the ashes, the hotel reopened its doors in March 2000. Phoenicia Hotel is a symbol of Beirut and its place in the hospitality scene is so ingrained that the decision to reopen it was a natural one. Since reopening in 2000 it has undergone a series of improvements led by internationally renowned designers, such as Martin Hulbert of Fox Linton, Inge Moore, and Summer Williams. Their aim was to evolve the design characteristics of the Phoenicia into a more modern approach while maintaining its cultural and artistic heritage. With each transformation, new opportunities take shape. The Phoenicia Hotel continues to make history, and to assure its place as Lebanon’s foremost hotel.

What have been some key developments for the company in 2017?

We have had a busy year with plenty of new initiatives from certain segments in the economy. In particular, we are placing a focus on organizing more familiarization trips for MICE bookers. We can definitely say that Lebanon is back on the map as a hub for regional congresses and conferences. We are also witnessing greater demand from the Latin American market, particularly Brazil, and from Australia. The fact that there are now more direct flights from European countries is another factor that is helping to increase demand. Among the trends that have stood out has been the return of high-end travelers, and also of clientele from the GCC region. The positive outlook during the year contributed to visits from high level political delegations, which we were proud to host. During the year other notable developments for the hotel included the addition of new retail openings, allowing for an enhanced retail experience for guests.

What are some key challenges that are present in the Lebanese market?

The general climate of the country has an impact on the hotel’s wellbeing. Political and security concerns can impact the hotel as a business, but the past year has been positive and we are booming again. Security is the most important factor here so it was essential for us to allay people’s fears. The measures we took then and continue to take to assure security proved that we are indeed safe; we use challenging times to reinforce our positive outlook. For example, when a crisis hit Lebanon’s apple farmers and impacted their ability to export, we made a conscious decision to support them by offering free apples to our clientele. Such small actions have the power to spread positivity in the face of adversity.

What are some of the upcoming projects with huge potential?

We are developing a lot of different projects in terms of culinary expertise, art, and CSR. We have an extensive art collection throughout the hotel and we continuously initiate creative projects to promote local talent, such as the Phoenicia Hotel Art Photo competition. We are working on a lot of culinary initiatives such as a culinary institute and an academy. We are also fully committed to improving the hotel’s CSR, ESS, and employee engagement through team-bonding activities and workshops spreading positivity and empowerment. We believe the hotel’s strongest asset is its people; we are driven by a human approach and want to deliver a genuine and true experience to all of our guests.