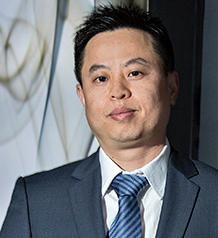 Xiong Yihui is President of Huawei in Colombia, with over 20 years experience in information and communications technologies, specializing in marketing and business development. Xiong joined Huawei 11 years ago and has worked in Latin America for over nine years. He worked as wireless marketing and solutions director and recently as vice-president of Huawei in Brazil. Xiong holds an electronic engineering degree from Wuhan University.

Share on:
TBY talks to Xiong Yihui, President of Huawei Colombia, on deploying the 4.5G network in the country, the factors behind Huawei's success, and its upcoming projects.

Colombia has advanced four positions in Huawei’s Global Connectivity Index. What factors have led to that improvement?

Connectivity is key in telecommunications. Coverage essentially provides connectivity, but that is migrating more to the internet and digital-based user experience. End-users expect to have coverage everywhere; they want to have service whether they are in the city or in the countryside. They want data services, and they want fast speeds. This is a basic need for people to be connected. The government has a new initiative called Vive Digital, which encourages companies to invest in improving their connectivity. Being active in telecommunications means we are already everywhere and are willing to participate in all aspects of that initiative.

When and how do you foresee the 4.5G network being implemented in Colombia?

We are talking about 5G, which is the official name of the next generation, whereas the current technology is 4G. Huawei was the first to deploy the 4G network in Colombia, and in Medellí­n, with LTE technology. We are now connecting people through smartphones, but in the future we see that through the Internet of Things (IoT) all devices will be connected and will have to communicate with everything else. 5G will accomplish this and is, therefore, a relevant technology to develop. That is the next level, and that is where our users will enjoy the technologies, capabilities, and reduced latency of IoT. We have another solution called Enhanced-LTE (E-LTE) based on 5G that allows users to see each other, talk to each other, and sync up all together on a big screen. Another technology is Narrow Band, which can connect users’ electricity bills to their computers so that they can keep track of use, expenditures, and so on. 5G is the next revolution, and we will ensure that it takes place in Colombia at the fastest pace possible.

What factors have led to your strong share of the market for smartphones in Colombia?

We are a major player in the smartphones market here in Colombia, and indeed throughout all of Latin America. We always introduce the latest cellphones, technologies, and models to the market, and we also focus on user experience to improve connections between phones and people. We invest a great deal in branding and working with public icons such as Lionel Messi in Argentina as our spokesman and football player James Rodriguez in Colombia. All of that has led to our success in the Colombian market, where we have about a 40% market share. The advantage of smartphones is obvious here, in that they provide better value for individuals, the market, and the industry. Smartphones are necessary to allow users to access mobile broadband and data services, to enjoy more information, to work better, and to bridge the gap in the digital divide.

What role does Colombia play in Huawei’s global portfolio?

Latin America accounts for 10% of our global business and is the third-biggest country in Latin America for Huawei after Brazil and Mexico. We always regard Colombia as a key market when introducing new technologies, and this year we are in the throes of a digital transformation. Operators are moving toward IT and cloud computing and leading a digital transformation. We have another important program in the country named Safe City wherein we work alongside governments and major firms to create safer cities through shaping a smarter city. We work with the national police, municipalities, and local governments to provide command centers, data centers, and cameras everywhere through which they can easily monitor the city and take precautions and preemptive measures where necessary, while also responding quicker to security situations. Everything is recorded, and if something happens it can be tracked to reveal what has happened, to help track criminals. By creating smarter cities, we are on the brink of developing a safer Colombia.