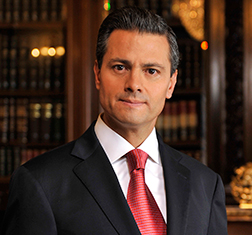 Man of the Hour

HE Enrique Peña Nieto holds a Bachelor’s degree in law from Universidad Panamericana and a Master’s degree in Business from Monterrey Institute of Technology and Higher Education. Early in his career he held a number of positions within the State of Mexico’s government, including Sub-Secretary of the Interior, Administrative Secretary, President of the Directive Council of Social Security, President of the Internal Council of Health, and Vice-President of the National System for Integral Family Development. In 2003 he won election as a State Deputy in his hometown of Atlacomulco. In 2005 he became Governor of the State of Mexico. He was sworn in as President of Mexico on December 1, 2012.

Share on:
HE Enrique Peña Nieto, President of Mexico, on the importance of following through with the reforms, the national resolve to stand up to violence and uncertainty, and achieving equality.

The past year has been a time of contrasts. On the one hand, it was the year when Mexico dared to change after approving 11 structural reforms, which were designed to accelerate national development. In addition, certain important infrastructure works got underway, while social programs were improved and their reach widened. These changes were socially crucial, as hundreds of thousands of new formal jobs were created.

But 2014 was a difficult year for Mexico as well. The violence perpetuated by organized crime once again hit the country. We feel pain, indignation, and anger. A legitimate demand for justice took shape, questions arose, and requests for transparency were made.

The positive and negative experiences of 2014 served as a lesson. Mexico cannot remain the same; the country must continue changing for the better. That is why 2015 requests the best effort from Mexicans. The year demands unity and generosity; team work and perseverance. It is time to uplift the mood, and regain confidence and hope.

In 2015, the main priority of my government is to improve the conditions of Mexican families. At the beginning of 2015, the price of electricity decreased nationwide, for Mexican households and businesses alike.

The cost of electricity that families incur has finally been reduced due to the energy reform, and as of 2015, there will be no sudden rises in petrol prices. For the first time in five years, no monthly increases in petrol, diesel or gas prices will occur, as stipulated in the fiscal reform.

Mexican families will also feel closer as they will not have to pay for long distance calls within the country. The telecommunications reform deemed that all calls placed within Mexico are priced equivalent to a local call.

In 2015 the benefits reaped from the reforms will manifest themselves in the everyday lives of all Mexicans, as more than 10 million low income families receive free digital television signals. This initiative constitutes one of the greatest efforts in the world to bring new technologies to every home.

Paving new paths of success for Mexican youth, we will open the largest support program for young entrepreneurs in Mexico. We will be able to assist Mexican individuals aged 18 to 30, who intend to open a business or invest in their current endeavors.

Additionally, cost-effective residential construction will be propelled, allowing more families to own a home. A package of fiscal and financing measures will be issued to promote home building, which will support overall economic growth.

Finally, as of the first day of this year, agricultural activities in Chiapas, Guerrero and Oaxaca have had preferential fiscal treatment.

México is a nation united, and we must walk this road together. Employment, development and prosperity must reach every corner of the country; today the south underdeveloped and requires additional support. As a result, three essential economic zones will be established to encourage economic activity and generate employment in Istmo de Tehuantepec, namely the adjacent populations of Lázaro Cárdenas Port, Michoacán, Guerrero and the Chiapas port.

The reforms have allowed these seven actions to become a reality, and they are starting to yield the initial benefits.

This spells good news for the average family and will add up to a better year for Mexico overall.

As President of the Republic, I will continue to work with determination, strength and clarity towards the future, setting all reforms into action.

The transformation that has begun represents the most profound change for the country in many years. A shift in the paradigm of this magnitude faces obstacles and resistance, but despite difficulties us Mexicans will do our best to build a better Mexico.

I have a firm commitment to fighting corruption and impunity and strengthening transparency. I will approach the people by listening to their needs and finding solutions for their problems together.

I am sure that we have the determination to overcome any adversity. With unity and renewed spirits we will prove unreservedly the fortitude and greatness of the Mexican people.