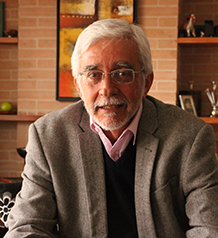 Julian Palacio studied Business Administration at the Central American University of San Salvador and specialized in Top Business Management at Inalde Business School. Before his current position, he was the first Latin American Coordinator of the American Association of Port Authorities, based in Washington, DC. He was founder and General Manager of Multimodal Port Society of Magdalena River and, previously, first General Manager of Santa Marta Port Society, both in Colombia.

Share on:
"Colombia is investing heavily in the 4G Concessions."

How do Colombian ports differ from their Latin American counterparts, and what are the main challenges they face?

Overall in Latin America, the ports are fulfilling their goals. Over the last 20 years many countries in the region underwent privatization, and Colombia also took part in this process. This has been beneficial for the region and for the country. In my view the government does not need to be paternalistic toward the ports and should leave their operation to private enterprise. In fact, shortly afterwards privatization Colombia’s ports improved their operations. This has been hugely beneficial to the country’s foreign trade. As such, I am not really worried about the ports. They are well managed and have a good level of investment, with some ports belonging to international, and some to Colombian companies. What is a concern is the lack of connectivity between the ports and the cities. This is a severe problem for Colombia. One of our stated goals is to work on the development of the ports. However, the problem is not with the ports, it is with the logistics from the ports to the cities. This is what the country needs to improve on. Currently, it is considerably more expensive to ship cargo domestically from Cartagena Port to Bogotá, compared to shipping it internationally from China to Cartagena. This is due to the poor connectivity and logistics between Colombia’s cities.

What is Colombia doing to cope with this challenge?

Colombia is investing heavily in the 4G Concessions, and in my view it is one of the countries that needs to develop its infrastructure the most. This will bring better connectivity because Colombia’s industrialized region is in the center of the country. With regard to the ports, the government is not investing at all; however, private investors are doing so. This means that, overall, Colombia’s ports are in a good position to cope with the country’s current level of trade. It is important to invest in and grow the ports, but this has to be done at a similar pace to the overall development of the country.

The majority of Colombia’s ports are located along the Caribbean Sea-Atlantic Ocean coastline. Do you think the country needs more port development on its Pacific seaboard?

Yes. The majority of ports are located in the Atlantic, and in my view we now have to focus on the Pacific. I think there is no doubt that the future of commercial trade from Colombia is in the Pacific region in Asia. To this end, the government is undertaking huge investment at Buenaventura, which is one of the key ports on the Pacific. We should not need to develop more ports. I know that there are many investors willing to invest in the ports that are already functioning.

Is there any segment that investors are particularly interested in?

There is interest in every segment. There are overseas investors interested in the storage and terminals of liquids and in oil. It was not the case 15 or 20 years ago, but now there is considerable interest from international investors who want to come into Colombia and invest in our ports.

How important a factor is the navigability of the Magdalena River in terms of solving Colombia’s current logistics problems?

Colombian President Juan Manuel Santos said recently that Colombia will be another country once the Magdalena River’s navigability is recovered. It is a significant issue that will definitely transform Colombia because it will give the country a huge advantage. It will be a significant leap forward and many other countries would like to have a similar resource to call on. For example, the development of Holland and many other European countries has been built on having the Rhine, a navigable river that transportation companies can take advantage of. Likewise, President Santos understands the great opportunity the Magdalena River presents for the country to move forward. Having said this, the river alone is not enough; we also need the roads because the Magdalena does not reach the border. Therefore, we are developing a road network that will connect the country, and also an inland port that is only 150km away from the river (Puerto Salgar, which will become the port of Bogotá and the central part of the country). This will make transportation cheaper, environmentally friendly, and safer than the high levels of road transportation we currently have. Another crucial factor is the peace agreement, which should be ready by March 2016. This, plus the combination of new roads and being able to use the Magdalena River, will greatly boost the country’s GDP by 2020. It will totally transform Colombia, which is a country that is relatively well off economically, but can only be enhanced by these new transport links.