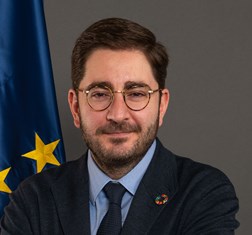 Manuel Muñiz was dean of the School of Global and Public Affairs at IE and Rafael del Pino Professor of Global Transformation. He is Director of the Center for the Governance of Change at IE. Between 2015 and 2017, he directed the transatlantic relations program at Harvard University. Since 2017, he has been a senior associate and one of the promoters of the Project on Europe and the Transatlantic Relationship of the Harvard Belfer Center for Science and International Affairs. Throughout his career, Muñiz has advised governments and international organizations such as the UN, the G20, the European Commission, and the Department of National Security of Spain. He has a law degree from the Complutense University of Madrid, a master’s in stock market and financial markets from the Institute of Stock Market Studies, a master’s in public administration from the Kennedy School of Government, and a PhD in international relations from the University of Oxford.

Share on:
In light of the rapidly shifting global landscape, Spain must work hard to ensure its integrated economy stands strong and that international trade continues to grow.

How has COVID-19 affected the image and reputation of Spain abroad?

A survey done by Red Track on country reputation during the peak of the crisis in Spain between early March and mid-April 2020 are striking. Spain’s image didn’t take a significant hit. We are still perceived as a reliable country with resilient institutions and a worthy culture that is extremely attractive for tourism. Our lifestyle is highly valued and appreciated throughout the world. A country’s reputation is much more resilient long term than what people think and is far less affected by timely issues such as the effects of COVID-19 on a particular country at a particular time. The pandemic is unfortunately a global phenomenon, and we tend to make snapshot evaluations of something that is dynamic, which is a mistake. This has affected other countries greatly, and hence our assessment of where countries are and how their image was impacted must also be dynamic. When you look at this objectively, you realize this is affecting some of the most capable countries around the world with some of the best healthcare systems, which have been more affected than Spain. Overall, the specific impact on our image abroad is minimal, which is what the quantitative data shows.

Global Spain has been working on several initiatives to mitigate the impact of the pandemic. How have been the results of the Spain For Sure social media campaign?

It was a positive campaign launched at the right time with a message of safety and security in a country that had made an enormous effort to contain one of the worse epidemiological curves in the world. The format is interesting, as it was a partnership with the private sector, with Global Spain on the public side in addition to the tourism and commerce ministries and the Prime Minister’s Office. Once the campaign was produced, we distributed it via our ministries, embassies, and ambassadors as well as around 3,000-4,000 businesses and business associations. This had a huge reach and was granular in its impact, reaching specific geographies and collectives that would not otherwise have been touched. That is a product of a PPP and demonstrates how much can be done when businesses are aligned with the government and vice versa.

What is your vision of the post-COVID-19 world?

We conducted a number of foresight studies at the beginning of the crisis to understand the impact on global economics, global governance, and the EU. The conclusion was that the crisis would accelerate prior trends of transformation. It would not slow them down or create major new trends but would serve as an accelerator of prior works. However, if not managed properly, the pandemic will accelerate social fractures, as it will unequally impact certain groups in our societies. It would have a larger impact on particularly fragile portions of our population, such as those who are precariously employed, as about two-thirds of the jobs displaced in Spain because of COVID-19 were short term and unpredictable. It also impacts vulnerable populations, such as the elderly living by themselves or single-parent or low-income households with no access to technology to keep up with online educational programs. During the entire exit strategy process, we had people who looked exclusively at the social dimension of the measures being taken and implemented. Another trend that might accelerate is that of deglobalization, as the crisis poses a challenge to countries that were already suffering supply chain problems before the crisis began. For example, we had challenges importing protective equipment and health equipment like respirators. We have launched an initiative at the European level to have a healthier debate about how we produce autonomy without undoing the global trading regime. The crisis has also exacerbated the US-China conflict and has added a healthcare dimension, with the US leaving WHO as a consequence. We have to prepare how Spain adapts to these issues and address them globally.