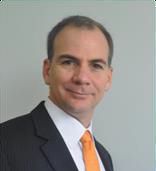 Miguel Bolinaga is the Country Manager for AES businesses in Panama (AES Panamá, AES Changuinola, and more recently Gas Natural Atlántico), post he holds since June 2013, after acquiring vast experience in the regional and global energy sectors, especially in the electricity commercialization and distribution areas.
From 2002 to 2007, Miguel served in La Electricidad de Caracas, in Venezuela, a
former AES subsidiary, which provides energy services in the city of Caracas, to
more than 1.2 million end costumers. Miguel joined EDC as Customer Services
Director, where he managed 25 commercial offices with more than 300 payment
facilities, online banking, and an in-house call center with more than 80 stations and
300,000 monthly calls.Miguel earned his bachelor’s degree in administration and logistics from the
Venezuelan Naval School. He also holds a degree in computer engineering from the
Venezuelan Armed Forces Higher Learning Institute, a master’s degree in
information systems development from Simon Bolivar University, a graduate degree
in customer experience from the El Salvador Higher Institute of Economics and
Business Administration, and a certificate in business finances from FEPADE, in El
Salvador.

Share on:
“We’re always aware of the communities where we operate.“

Could you tell us about the results that the five power generation plants have had in Panama?

We have seven power plants in Panama. In 2018, we had 777MW installed in Panama, with 705MW based on hydroelectricity. Five of the hydro plants are in Bayano, La Estrella, Los Valles, Esti, and Changuinola, additionally we have a bunker-based barge. In 2015, we won a tender with the distributors to deliver, starting in September 2018, of the first natural gas-based power plant in Panama and Central America. Another 381MW plant was ready on time. From then until now, that plant has generated at maximum capacity, generating power 24/7 over the summer. This is good because hydroelectric plants don’t produce much energy in the summer. With more diverse energy sources, you can have a much more flexible energy market for Panamanians. This new plant allows you to fill the capacity gaps in the national grid.

What are the strategies to reinforce the fact that you’re producing more than 24% of energy for the country?

The plant we made generates 381MW, and this is treated in turn with another plant from us, with a terminal that is based on liquefied natural gas and has the capacity to receive ships up to 160,000 cubic meters and a storage tank of 180,000 cubic meters, this tank only uses 25% for this plant and the remaining 75% we see it positively so that it enters into other development issues within the country. Additionally, we see that natural gas will contribute to sectors such as transport. In the industry today, all that work with boiler-based, refrigeration-based, diesel fuels, all can be switched to natural gas, this makes the industry much more efficient. Our plant that does not only work with generation for electrical energy but also will touch these elements that are important. Regarding bunkering, we’re there at the door of the Panama Canal and the terminal has the capacity to receive and deliver from 3,000 to 160,000 cubic meters. In fact, we also see everything that has to do with transport, trucks and tanks; it can be done with natural gas. Gas pipelines or barges that can take liquified natural gas (LNG) not only to the country but also to other ports in El Salvador, Guatemala, Honduras, Nicaragua, and Costa Rica can also be made later.

How are you planning to achieve your medium- and long-term vision?

We are developing a liquefied natural gas (LNG) project with Bahia Investment Group. In this project, we put around 37% equity of both companies, over 200 million for each one. The goal is to have the financial muscle for the other 67%. To do this, we have different multilaterals such as the IFC, the BCIE and local banking such as Bancolombia and Banco General. Finally, the different institutions and agencies of the state must also be aligned so that they can support the project to be developed in the time needed by the country. The main stakeholders of this project are the banks, the partners, the state and the communities surrounding the project. The community is an important factor, which is why we started about 10 different social projects. We wanted the community to grow through education and training, while providing funds for so the microenterprise could work and grow.

Could you talk about the goal of reducing carbon emissions by 2030?

By 2030, there is a clear goal of reducing carbon emissions by up to 70%. That’s not easy, especially when you have a company like AES that has been working in other countries with coal plants. But the decision was made at the corporate level that we would be leaving these coal plants to replace them through renewable, batteries technology, distributed generation and natural gas, depending on what can be applied in each country. In Panama, we chose gas because we saw that it was making the force to have a much more mature energy matrix. However, that does not mean that we are not going to grow here with other renewable energies. We are seeing several projects for 2019 and 2020, around 50 and 70MW of solar energy.

What are the latest initiatives that are affecting the social development of the country?