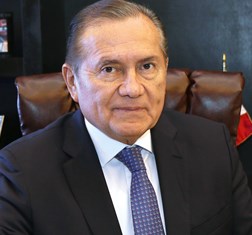 Javier Jiménez Alcaraz has overseen the operations of Mexico City’s subway system since April 2018. He previously acted as the deputy director for maintenance. He holds a degree in civil engineering from Polytechnic National Institute (IPN) and a master’s in public administration from the Institute of Advanced Studies in Public Administration.

What are the main funding sources for both operation and construction in the subway system?

The Metro Public Transport System has several financing sources, but the biggest chunk, which is used for operation, maintenance, and expansion, comes from the city administration. Our total annual budget is around MXN17 billion; while grants make up around 50% of it, the rest is financed by ticket sales. On average, 5.5 million people use the subway on a daily basis, with the majority paying MXN5 per trip. Since students are charged MXN3 per trip and disabled and elderly are provided free service, the transport system requires specific allowances. The federal government, through the Chamber of Deputies, allocates resources from the federal budget, including the Capital City Fund and some other funds that cover 10% of the budget. However, the total budget fails to reach our target of MXN20 billion.

What is the strategy to raise the present MXN17 billion to the target MXN20 billion? Have you explored the possibility of private sector engagement in the expansion of the city subway system?

For two years, we have been promoting public-private investment projects such as real estate development on subway stations and other projects. That would allow us to extend the list of properties and have an additional income. Currently, we gather revenues from advertising and business premises, but that makes up a small contribution. We are planning to boost that to attract more private investment and to generate both assets and income for the subway system. Moreover, we are negotiating with the federal government for the subway to be recognized as a metropolitan service; subsidies should not just come from the city administration but from Estado de México and the federal government as well, since around 2 million users are from different states of the country.

To what extent are your real estate projects inspired by Hong Kong’s ‘Rail plus Property’ model?

We also take inspiration from Paris subway and other subway systems around the world where real estate development generates significant revenues. At present, private investors are constructing two buildings above Villa de Cortés station. The investors will be able to recoup their capital within 10 years. We are also working with the city government for the construction of Modal Transfer Centers to improve mobility between different transport systems such as the subway, Metrobús, and intercity buses. Greater mobility will attract a greater number of investors.

How advanced is the process of automation of the subway system’s various lines?

With the help of local technicians and companies, we have updated the automatic piloting system from analog to digital. Unlike other subway systems around the world that faced problems in adapting modern technology, we choose a smooth upgrading process that did not disturb other lines. There is one issue in Mexico City: the type of soil leads to recurring water filtrations. In order to tackle that, we are using new civil engineering techniques for a waterproof tunnel.

How is the energy supply for the subway system, and what are the updates on the plan to generate energy through waste?

Around 90% of the energy is provided by Federal Power Commission (CFE). The massive waste energy facility will turn 4,400 tons of solid waste into electricity, enough to fulfill the entire energy demand of the subway system. The project will be operated by Veolia and its construction is supposed to start from 2019.

How successful is the integrated fare system? How did the users take it?

Overall, the users highly appreciated it. We have a universal card operated by MasterCard that works as a debit card and allows the users to access the subway, Metrobús, and bus systems. This innovation started recently in November 2017, and we have sold more than 1 million cards. Moreover, we also cooperate with Metrobús and Ecobici (public bicycles) to exchange information about travel patterns in order to improve the service. This enables us to make decisions regarding the operation of the system.