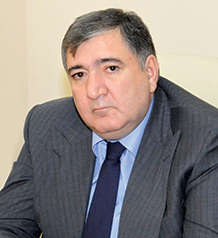 HE Fazil Mammadov studied at the faculty of Finance and Credit at Azerbaijan State Economic University. From 1987-1989, he worked as an economist at Ganja Industrial and Construction Bank and Baku Industrial and Construction Bank. He was a Lecturer and Chair Head at the Finance and Credit College before going on to work at Unsal Commercial Bank as Head of the Shamkir Branch and then Agro-Industrial Bank as the Chairman of the Board. He worked as the Deputy Head and then Head of the Main Department for Finance, Tariff, and Currency Control of the State Customs Committee from 1995-1999. In 1999, he was appointed Chief of the Main State Tax Inspection, and in 2000 the Minister of Taxes of Azerbaijan.

Share on:
TBY talks to HE Fazil Mammadov, Minister of Taxes, on building a diversified, efficient, and innovation-driven economy, and the positive effect economic stability has had on tax revenues.

In 2013, you spoke of the economy’s growth over the past 10 years, citing an impressive three-fold increase in GDP over this time. To what extent has 2014 continued this trend?

Although 2014 was marked by a global economic and financial crisis and increased international risks, our country’s primary objectives have been achieved. Azerbaijan has achieved an increase in GDP and continued to pursue the policy of economic diversification. In 2014, Azerbaijan’s economy grew by about 3%, a significant increase given the current economic situation. In recent years, the government has taken serious steps to diversify the economy and develop the non-oil sector. In 2014, the non-oil sector saw 7% growth, and in the future, it will contribute even more to Azerbaijan’s economic growth. The macroeconomic environment has remained stable. The inflation rate was as low as 1.4% against a 5% rise in the incomes of the population. $27 billion was invested in the country’s economy, which has given positive momentum to the economy and the consumer market, and had a positive impact on the growth of income of enterprises and business entities. Notwithstanding the processes observed in the world markets at the end of 2014, the overall stability of the economy has had a positive impact on tax revenues, with tax revenues through the Ministry of Taxes having increased by 6.7% compared to the previous year, reaching AZN7.113 billion.

Diversification lies at the heart of Azerbaijan’s economic reforms. Can you explain how the Ministry for Taxes’ work relates to this?

Azerbaijan pursues the policy of building a diversified, efficient, and innovation-driven economy, as well as becoming a regional investment center. Our government is working actively to diversify the economy by implementing major regional infrastructure projects. There is a steadily growing business sector and an inflation regulating policy in the country, along with legislation that is favorable to foreign investors and their activities. The tax policy is widely used as a means of stimulating economic growth, which is particularly common in developing countries with a low tax burden. We call it an active fiscal policy, and our government puts a particular focus on this as part of economic regulation. We are trying to keep the tax burden at an attractive level, and there are only nine types of taxes in Azerbaijan. The rate of corporate tax is 20%, and VAT is 18%. These are lower than average European indicators. Our legislation also sets maximum limits of tax rates, does not discriminate between foreign and local investors, and supports the development of SMEs. Goals such as encouraging development of the non-oil sector and reducing dependence on oil revenues provide a basis for our long-term development. The non-oil sector will be a leading force of development over the coming years.

Hand-in-hand with diversification comes competition. Your office has considerable ability to influence this in the emerging sectors of the economy. How are your policies encouraging competition in these nascent markets?

Today, the tax system not only fulfills fiscal functions, but also serves the purpose of supporting economic development, attracting investment and new technology, and, in some cases, supporting the social sector. Azerbaijan extensively uses tax relief practices in important areas of development. Agriculture, one of the key sectors contributing to GDP, has long been practically exempt from taxes. Measures are being taken for the establishment of technology parks that will play an important role in forming new areas of the national economy and making them more competitive. In order to stimulate their development in the medium and long term, those operating in these parks have been exempted from taxes for seven years, while managing organizations and operators have been exempted indefinitely. Tax legislation also supports the bank and insurance sectors of the country as banks and other credit institutions enjoy tax benefits for the interest paid on deposits of individuals. Azerbaijan’s effective fiscal policy supports the non-oil sector, particularly the development of SMEs. It is possible to register a company within a few minutes and start a business. According to the Doing Business Report of the World Bank, our country is among the top 12 countries of the world for business registration procedures.

In the past year, the revenue from the State Oil Fund (SOFAZ) will have declined in line with the falling oil price worldwide. How has this affected the tax returns to the state budgets?

The decline in oil prices has affected budget revenues to some extent. However, the government is closely watching world markets and has different scenarios in mind to protect our economy. The government intends to take measures to diversify the economy, carry out institutional reforms and implement more effective methods of management, which will allow us to keep the budget deficit within the planned limits. The oil sector has a significant share in budget revenues, which, in recent years, has been declining both in GDP and budget allocation. The purpose is not to eliminate the oil and gas factor, as these sectors are the country’s key industries, and there are plans to develop major gas production projects in the near future. Our goal is to create a broad, sustainable and steadily developing non-oil sector and our efforts, using oil revenues for the formation of the country’s infrastructure, stem from these goals.

E-Government is at the heart of the country’s vision for developing an information society. How is the Ministry of Taxes adapting to this program, and with what goal in view?

The tax service is the most active participant of the electronic government in the country. The Automated Tax Information System (AVIS) implemented in the Ministry of Taxes has created many technological advantages for us. With our staff consisting of a little more than 2,000 employees, we monitor the activities of more than 600,000 taxpayers and are able to offer them the most advanced services. The tax service was the first in Azerbaijan to start large-scale e-government building. Azerbaijan’s tax service is the most electronically managed government agency with the widest introduction of modern information technologies. For the ratio of administrative costs to tax revenues, Azerbaijan is considered one of the countries with the most efficient tax administrations in Europe. Entrepreneurs in Azerbaijan can fulfill all of their obligations over the internet without visiting the tax authorities. With 60 modern services, Azerbaijan’s tax service is the government agency offering the widest range of e-services in the country. Global trends and deepening international integration necessitate the establishment of a tax system based on knowledge management and constantly improved from a technological perspective. We intend to continue reforms aimed at expanding the use of modern information technologies, electronic audit and innovation-oriented electronic services in the tax system and establishing partnership relations between taxpayers and tax authorities in the near future.

What are your projections for the coming months, and what will be the main challenges for the Ministry?

Along with promoting the country as a sporting nation, Azerbaijan has hosted major events that are also a great support to the development of tourism. The first European Games create unparalleled opportunities for demonstrating the potential of Azerbaijan, and it will be a landmark event not only in Azerbaijani, but also in global Olympic history. On the other hand, the realization of Azerbaijan’s tourism potential conforms to our policy of enhancing the capacity of the non-oil sector. Our country has great potential to meet a significant part of its budget by leveraging tourism potential. We are direct stakeholders in the realization of this potential, because tourism means additional income, new jobs, and economic activity. Such prestigious events bring dividends and benefits to the country. As for our expectations for 2015, the “Azerbaijan 2020: Vision of the Future” concept sets forth our medium-term goals. Our government aims to increase the volume of GDP per-capita more than twofold by 2020. The tax authorities also play an important role. The government has mobilized all possibilities to ensure the business environment is more attractive. The reforms in tax administration will as always serve to create the most favorable conditions for doing business in Azerbaijan.