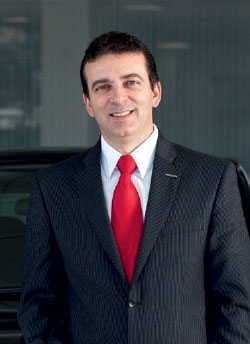 Airton Cousseau joined NMEX with more than 20 years of automotive industry experience in the areas of Sales, After Sales, and Marketing. He had previously held a number of management positions at General Motors in Brazil and in Detroit, Mich. He was also the executive director for Hyundai Motor in Brazil. His strong background in import and export marketing, finance, dealer network development, accounting, sales and after-sales has helped expand Nissan’s market share in Mexico and positively impact its dealer network. He holds an undergraduate degree in Business Administration from Federal University of Parana, Brazil, as well as advanced degrees in Marketing from the Universidad De La Republica, Uruguay, and Finance from the Universidad De Montevideo, Uruguay. He speaks Portuguese, English, and Spanish.

Share on:
How did Nissan become the largest automotive exporter and investor in Mexico’s automotive sector? Mexico was the first country where Nissan established manufacturing operations and facilities outside of Japan in […]

How did Nissan become the largest automotive exporter and investor in Mexico’s automotive sector?

Mexico was the first country where Nissan established manufacturing operations and facilities outside of Japan in 1966. Today, Nissan Mexicana is the operating global benchmark for the corporation when we look at some of the key metrics: sales volume, market share, manufacturing, financial arm (Credi Nissan) and investment, among others. Nissan became the sales leader in the market, for 61 consecutive months, as of June 2014, when we established a 26% share. We firmly believe that Nissan has maintained its leadership in the Mexican automotive industry due to various key elements: the first being our talented team, as well as a winning mindset, and our product portfolio that reflects our passion for innovation, quality, durability, and reliability. We also have top satisfaction indexes in both sales and customer services. Meanwhile, our network of dealers has more than 230 modern and efficient facilities in optimal locations, with solid geographical coverage. We also have a strong financial arm through Credi Nissan, the leading financial institution in the country. We also constitute the leading manufacturing operation in the country with our three plants. Nissan has been established as the top investor in the country of the decade through two particular projects: the investment of a second plant in Aguascalientes, at which we started production for the new Sentra last November, incorporating a first phase of a $2 billion investment. Most recently, as of June 27, we ratified, in partnership with Daimler, an additional investment for another plant in Aguascalientes, incorporating a $1.4 billion investment, for the production of Infiniti and Mercedes-Benz vehicles.

What will the third production plant in the country, located in Aguascalientes bring for Nissan Mexico in terms of job creation and production?

In November 2013, Nissan inaugurated its third plant in Mexico, involving the first phase of a $2 billion manufacturing complex in Aguascalientes. Nissan Aguascalientes’ 2nd plant resulted in 3,000 direct jobs, with an annual capacity of 175,000 units; taking Nissan’s total Mexican manufacturing capacity to 850,000 vehicles. The Sentra produced at the new plant is mostly being exported to the US and Brazil, as well as satisfying the local demand for this vehicle, which is among the top-10 selling vehicles in the country. Most recently, the Renault-Nissan CEO Carlos Ghosn and Daimler CEO Dieter Zetsche announced that both companies had agreed to establish a 50:50 joint venture, the business entity that will oversee construction and operation of the new plant in Aguascalientes, the third one in the state and fourth in the country. The new plant will be built in the immediate vicinity of the existing Nissan facility and will have an annual capacity of 300,000 vehicles when fully ramped up. The start of production is planned for 2017 with Infiniti models. The production of Mercedes-Benz brand vehicles will follow in 2018. Daimler and Nissan will share the total investment cost for Aguascalientes of approximately $1.4 billion. The companies will add almost 5,700 jobs (including engineering, line workers, and support staff) by the time the plant reaches full capacity, expected in 2021. In addition, a high localization rate will significantly increase the Mexican supply base, while also incorporating more than 10,000 indirect jobs. These two investments confirm, in this decade alone, a total figure of over $3.4 billion, while also generating almost 9,000 direct jobs, along with more than 20,000 indirect jobs.

The automotive industry employs 500,000 people in Mexico and represents approximately 4% of GDP. What will 2014 bring for Nissan Mexico?

In 2013, Nissan established a new sales milestone in the country with over 267,000 units sold. In 2014 we are looking forward to surpassing this figure, even with an industry that contracted in the first semester. Along with that our manufacturing strategy is considering a new milestone of 800,000 units for this year. The base to continue with this growth is well established in the top talent we have in our team of more than 14,500 employees, our leadership mentality, a solid financial arm, customer satisfaction and preference for our vehicles, along with the introduction of products with cutting-edge innovation in our line-up such as the Nissan LEAF and Nissan Xtrail. To that can be added stronger sales of products of higher growth potential like the Nissan Versa (the second best selling vehicle in the country), Sentra and Altima (integrating new technologies and connectivity), Pathfinder (the new favorite crossover of the Mexican public), and the Nissan NOTE, among others. Through the recent investment announcement in partnership with Daimler, we look forward to the day when Nissan will produce over 1 million vehicles in the country.