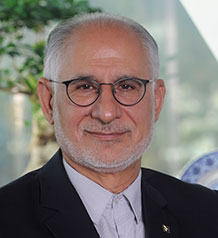 Dr. Ali Ashraf Afkhami has been the Chairman of the Bank of Industry & Mine since 2013. He was previously the Chairman of the Social Security Organization and held different positions in the Ministry of Labor and Social Affairs and the Islamic Republic of Iran Shipping Lines. Being also the Chairman of Karafarin Bank, he has more than 36 years of management experience in big corporations and the investment market. He is a mechanical engineer from Amir Kabir University in Tehran and holds a master’s in governmental management.

Share on:
"After sanctions, the door has been opened but not as fast as we expected."

What role do banks play in attracting foreign investment into national projects?

This year we are celebrating the 60th anniversary of the Bank of Industry & Mine, as in 1956 we were the first development bank in Iran to be established. Although we have experienced a lot of challenges during these years, we have always stuck to the vision of progress and development of the country. In this regard, we are not a commercial bank; we mainly participate in the financing of different projects. We have the human capital, the knowledge, and the experience to conduct projects in all types of industries, except agriculture and housing. We are experts in a wide range of sectors including pharmaceuticals, textiles, food processing, the auto industry, home appliances, mining, steel mills, cement, and tile manufacturing. Moreover, Iran is famous for its oil and gas resources. We are among the top-three countries in the world reserve wise, production wise, and, hopefully, after sanctions, export wise. We would like to focus on those areas where Iran has a competitive advantage, and the energy sector is definitely one of the areas we can rely on. Our portfolio is quite strong in financing projects in the petrochemicals field.

Which are the most important projects you have financed?

In the past two-and-a-half years, we have focused on infrastructure with the expansion of the rail network. The first high-speed train developed in Iran between Tehran and Isfahan was financed by the Bank of Industry & Mine. We have also been awarded with a contract to finance another high-speed train between Tehran and Mashhad. We have been involved in power generation as well, the first bank to financing power plants in Iran. This is a very good market for foreign investors, as we need to develop 3,000 MW in power generation annually. Moreover, we have financed desalination plants in the Persian Gulf. That sort of megaproject could be duplicated in the coming years, and we welcome other banks to join us to form a syndication for financing. Ports like Jask or Chabahar would be export terminals for the globe and neighboring countries. We want to be considered the developers of the country, and that is why the market share in the industry and mining sector is over 16%.

What is the position of the bank to resume relations with European banks?

After sanctions, the door has been opened but not as fast as we expected. The bank was prepared to meet the international standards of the world’s banking system even before sanctions, which makes me believe we are pioneers in this sense. At the same day of the implementation of the JCPOA in January 2016, we were the first bank to be reconnected to the SWIFT network. We have resumed correspondent banking relations with 38 different banks from 18 different countries, and other 22 banks are in the pipeline. Among European banks, Italy took the lead, and Germany will surpass it within the next two months. We are doing normal business with France, the Netherlands, Belgium, and Spain. We are a major shareholder of the European-Iranian Bank (EiH), a strong bank based in Hamburg, which since the first day started to reestablish relations with Iranian banks. This is a good tool to facilitate relations with European firms. After being forced to be out of the market, we are back to contribute to the business of Iran and the region, as there are a lot of opportunities in neighboring countries to cooperate with European companies. We can play a great role in connecting those firms to these countries, and Iran could be a platform for doing business and helping in the prosperity of the region and the world.

What are your expectations for this year?

It is a must for any bank in Iran to meet Basel III standards, and this means achieving a capital adequacy ratio over 12%. In this regard, we have a plan for increasing capital, and today the first phase of $330 million has been concluded. I am looking for another $1 billion capital increase, which will be reached at the beginning of 2017. As the main source for development bank is the capital, this will encourage a lot of banks in the world banking community to rely on our financial statements and join us in syndicated projects. I have good signs from Japanese and Chinese banks to enter the Iranian market, but also from Italians and Germans. We have a revolving three-year strategy plan, and every year we review it so it gives us a realistic picture for the future. We have learned from our failures and we are not going to give up.