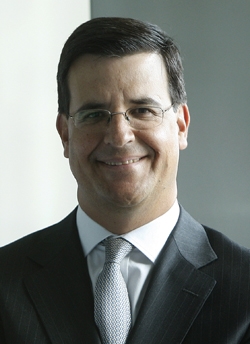 Christian Laub is Chairman of the Board of the Lima Stock Exchange and General Manager (CEO) of Capital Credicorp, Credicorp’s Investment Banking Group. Previously he was responsible for the Corporate Banking Division of Banco de Credito del Peru (BCP).

Share on:
"We all feel that we are not going to see the same commodity prices in the near future."

What is the core focus of Credicorp Capital?

Peru has been growing significantly over the past decade. Most of our Peruvian clients were well served within Peru, registering domestic market growth followed gradually by a regional presence in such markets as Chile or Colombia. While we could serve them well in Peru, we lacked the necessary resources to help them enter regional markets. That’s when we thought there would be a space for what’s going on in the Mercado Integrado Latinoamericano (MILA), or this part of the Pacific Alliance. Every day numerous Colombian, Chilean, and Peruvian companies invest in other markets. What’s happening in the real sector in terms of investment is that we’ve built this investment banking platform to support not only companies, but also individuals and institutional investors that are starting to invest all over our region. That’s why we first created BCP Capital, an investment banking group, in Peru, as a spin-off of assets out of BCP. Later, we acquired a majority stake in Correval in Colombia and IM Trust in Chile. These acquisitions plus BCP Capital became Credicorp Capital. If you look at South America, you have Brazil on one side, which is huge but has its own dynamics, and then Colombia, Peru, and Chile, all having similar economic and political models. Individually, we are quite small, but if you add up the three of us, it amounts to 90 million inhabitants with a GDP of $800 billion. More companies and people will start investing in a regionally connected economy, and we realized that such a platform would better serve them in investment banking, asset management, and sales and trading. Those are the three main businesses on which we focus on this platform.

How will you react to falling commodity prices and how will that affect debt issuance and Credicorp’s activities?

We all feel that we are not going to see the same commodity prices in the near future. However, the Peruvian mining sector is highly competitive on a cost basis, even amid prevailing prices. That will not affect the actual debt issuance that this country needs, because the infrastructure deficit is said to be $90 billion and growing. If we are going to finance many such programs, we can expect local and international financing participation, depending on scale. That is something that we are going to be greatly active in. Ultimately, even though Peru has done well over the past decade, it remains a poor country that will need to grow by between 6% to 7% per year for the next 10 years to reduce poverty and become a developed nation.

“We all feel that we are not going to see the same commodity prices in the near future.”

Do you think there has been overinvestment in Peru’s mining sector?

Here, no. I think that you will see many new projects arising in Peru. The good thing is that the debt levels in the mining sector are very low. Many of these projects have already issued new debt, such as Freeport-McMoRan for the Cerro Verde expansion. Grupo Mexico will probably issue some bonds in the international markets, but I don’t think there are any restrictions on money being available to finance them. Only between institutional investors in Colombia, Peru, and Chile you have more than $500 billion in resources. Money is not a restriction, and good viable projects will be developed and should not have problems with the needed financing.

You just launched two new funds, as has Mexico, which plans to enter MILA. What is the future of those funds?

We built a Luxembourg-based platform that covers Colombia, Peru, and Chile. I think that we are strong in each of these countries, but what we wanted to achieve with these funds was the cumulative effect of investors approaching the three countries as an investable proposition. Many investors don’t have the necessary capabilities and knowledge to invest in the region. We live here and should therefore know the region better, but, if you want to attract investment from the Middle East or elsewhere, without having in place a platform that complies with all regulations, you won’t be able to do so. We need to play the game on a global, rather than a local basis. And this is precisely what the new platform allows.

The Bolsa de Valores (Lima Stock Exchange) is heavy on mining currently and some predict negative effects from the recent drop in commodity prices. What is your view?

The Lima Stock Exchange (LSE) has always been a mining exchange. About 50% of the market capitalization or more has been weighted on mining companies. I’d like to see other sectors active on it, but the situation is such that we have traditionally been a mining country and will continue to be one. Therefore, much of what happens at the LSE will depend heavily on the fate of the mining companies. The year of 2013 was a particularly hard one amid declining commodity prices, which reflected in the price of equities traded on the LSE. The mining companies’ prices lost around 40% of their value, which given their overall weight, negatively impacted the index overall. There has been a slender rebound this year as prices have stabilized and some have even risen. Nonetheless, the performance of those companies often depends more on external factors than on the plight of Peru.

You recently signed a deal with S&P Indices to promote your index. Where does this fit in with your growth strategy?

The LSE has had a number of indices in the past, but the problem with each was that none of them were investable due to poor liquidity, the chief concern at the bourse that curbs trading volume. We need to work on how to boost liquidity and the market and have indices reflect that liquidity. We need to find a way to make it. This is why we joined up with Standard & Poor’s. They are specialists in selling the indexes to the international markets and they will help us promote the market and increase liquidity.

What is the climate in Peru for international investors?

The LSE recently reduced trading costs by 70%, which is significant. But, with this 70% we are not as competitive as we should be. Actual volumes haven’t increased substantially as a result of this price reduction, as on top of these costs, brokerage costs are also incurred. In the past, infrastructure cost was 20 basis points (including SMV and Cavali). That declined to 10 basis points, but if you add 50 basis points on top of that from brokers, the reduction is much smaller. A second consideration is that Peru is alone among the Pacific Alliance to levy a 5% capital gains tax, which renders us less competitive than the other two members. Liquidity simply moves to a more efficient market. On a typical day at the LSE, the average traded volume will be around $15 million. But for Peruvian companies trading in New York, it’s going to probably be $150 million to $200 million. This poses the question of whether there is liquidity in Peruvian companies. And while the answer is yes, that is not the case on the LSE. It will take a lot to bring that liquidity back home. Simply removing taxation would make it much better and we could do a lot of things to increase liquidity, the fundamental limitation curbing LSE performance.

What role do you expect the LSE to play in broader national development in the coming years?

The main advantages that the stock exchange brings are transparency, liquidity, and good pricing. This said, transparency in particular is key. If we are going to attract investors, both internal and from abroad, we need to make sure that companies, be they listed on the LSE, or not, are complying with the highest standards of governance. Something we should be focusing on, and indeed, something we are still working on as a market and as a nation is corporate governance and transparency. As long as we are seen as a highly competitive, transparent, and well-governed exchange, more companies will be keen to come and list on it, and that culture will permeate throughout the country.