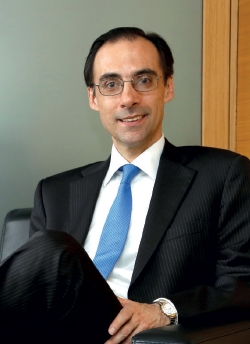 Juan Carlos Durán studied Law at the Universidad del Rosario, and later achieved a Master’s degree in Economics from the New School for Social Research in New York. Over the course of his career he has been mainly involved in the financial sector, occupying the position of General Secretary at both Bancafé and Banco Caldas. He previously acted as External Consultant for Standard Chartered Bank and other financial entities. Since 2002, he has served as the President of the National Guarantees Fund.

Share on:
How would you assess the development of the Colombian economy? Currently, our main economic partners, namely the US and Europe, are growing slowly. In addition, with regard to commodities, we […]

How would you assess the development of the Colombian economy?

Currently, our main economic partners, namely the US and Europe, are growing slowly. In addition, with regard to commodities, we observe that China, despite impressive growth in recent years, has seen its economy grow at lower rates than before. However, we should highlight that one of the commodity prices that has remained pretty stable is that of oil, which is one of the most important for our economy. This global economic context has had a negative impact on our economy; nevertheless, it has been expanding at a moderate pace of 3.5%-4%. We are optimistic that positive economic prospects for 2014 at an international level will give us a further boost, as rising demand in markets such as the US and Europe will allow us to take advantage of recently signed free trade agreements (FTAs).

Which trends do you see in the development of the national economy?

From our own statistics, it is difficult to guess, since we serve a segment the output of which is mostly focused either on generating sufficient economic income to make a living or on generating profits in traditional activities (rather low on technology or innovation). For this reason, we do not identify special trends in the segments in which we work; however, from a broader perspective, we believe that the most interesting growth is taking place in the sectors that are being promoted under the Programa de Transformación Productiva, which has been developed by the Ministry of Commerce, Industry, and Tourism.

What is your take on the housing market?

Our institution was established in 1982 to support small enterprises in Colombia. In 2003, the government decided to boost the expansion of social housing, and we were directed to step into that particular segment by providing guarantees to people who wanted to purchase these housing units. Ever since then, we have focused on the lower end of the market and the Vivienda de Interes Prioritario program. Nevertheless, our participation in this segment is rather limited: it only represents 3% of our overall activity, whereas the remaining 97% is business activity. From 2014, we will also most likely have subsidies available through a special program in cooperation with the Ministry of Housing called “86,000 housing units,” so that the cost of our guarantees will be covered by the government, rather than being paid for by the borrower. Also, this program has other types of subsidies and economic support for people making use of it. For example, it provides economic support to cover the down payment, and the interest rate on the loan will be below market levels.

What are the general requirements when applying for guarantees from FNG?

It is simple, actually. If you are an SME that would be entitled to obtain a bank loan, you simply have to comply with the bank’s requirements. In fact, banks have the last word on whether to grant guarantees within a maximum amount assigned by FNG to each institution. The whole process is done over the internet between the bank and FNG and the SME does not have to do any paperwork. We mainly target banks, because we believe that by doing so we can facilitate access to credit for many people.

What are your expectations for 2013 and beyond?

In 2013, we are going to guarantee loans in excess of $5 billion. In terms of future prospects, FNG has been growing along with SMEs in Colombia and the dynamic is working well. I would say that we will close 2013 on around 4% growth, but that this figure should improve in 2014. In the longer term, I foresee a sustained growth scenario for the national economy. We have made significant progress over the past few years regarding the business environment, but more must be done.