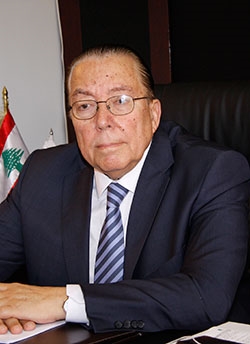 Born in 1941, HE Mohammad Machnouk obtained a Bachelor’s degree in Political Science and Public Administration from AUB in 1968, and holds a degree in Media from University of Strasbourg in France. In a prestigious career, he was formerly the General Director of the Beirut al Massa newspaper (1966-1973), the General Director of the National News Agency at the Ministry of Information (1973-1979), representative of Lebanon to the Standing Committee of the Arab Media in the Arab League (1973-1979), President of the Federation of Arab News Agencies (1988-1989), media lecturer at the Lebanese University and Beirut University College (1975-1985), Member of the Board of Trustees of Makassed Philanthropic Islamic Association (1978-2004), Chairman of the Education Committee (1994-2004), President of the Cultural Council of the city of Beirut (2000-2004), President of the American University Alumni Association (1998-2004), and a member of its Supreme Council.

Share on:
"In 2009, the government of Lebanon committed to achieving 12% renewable energy in its energy mix by 2020."

Environmental degradation has emerged as one of the key challenges facing Lebanon’s socio-economic development, costing the country $908.8 million each year. What initiatives aimed at improving the overall efficiency and effectiveness of solid waste management is the Ministry of Environment currently undertaking?

The Ministry of Environment is involved in two initiatives. The SWAM project, financed by the EU and managed by the Office of the Minister of State for Administrative Reform (OMSAR), consists of building and operating, sorting and composting plants and sanitary landfills in Lebanon. This project will lead to the closure of several open dumps and will stop open burning activities. The second initiative is the national strategy for solid waste management issued by the Ministry of Environment and approved by the Council of Ministers in January 2015, which is now in the bidding process and should be implemented starting end of July 2015.

How does the Ministry of Environment promote recycling and re-usage of materials among the Lebanese population?

The Ministry of Environment promotes recycling through supporting awareness campaigns by participating in workshops, conducting lectures, and approving plans and programs for NGOs and municipalities related to sorting at source.

“In 2009, the government of Lebanon committed to achieving 12% renewable energy in its energy mix by 2020.”

Over the past decade, forest fires have been increasingly frequent on Mount Lebanon, causing considerable environmental damage and influencing the economy of the affected areas. What steps are being taken to reduce their incidence?

The proportion of forested land in Lebanon was 10% in 2014, a major reduction on 30% 40 years ago. What is the importance of afforestation and reforestation projects in the drive to create a green Lebanon?

Due to the rapid growth of Lebanon’s population; that coupled with the development of agriculture and urban construction, as well as improper forest management, the degradation of forest resources in Lebanon has been accelerating. As a result of this degradation, environmental problems including soil erosion and loss of biodiversity are being experienced, while natural hazards occur with increasing frequency. In 2001, the Lebanese government increased its focus on forest conservation and restoration of degraded forest ecosystems. A series of measures has been put in place through the National reforestation strategy applied by Ministry of Environment. Afforestation causes fundamental changes in ecosystem structure and functioning, including changes in shading, the microclimate, production, nutrient cycling, and the water balance, all of which may affect local and national biodiversity. On the other hand, afforestation and reforestation projects are among a suite of approaches possible to address the challenge of climate change and the inclusion of land use change, and forestry in international agreements are also seen as a means of encouraging climate friendly land use, particularly in developing states like Lebanon. Moreover, the Ministry of the Environment has noted the positive effects of afforestation programs on water yield within local ecosystem processes. Therefore, previously planted areas have addressed deforestation and water yield.

What is your outlook for the transformation of the energy sector in Lebanon and what are your prospects for the future of clean technologies and renewable energy production in the drive for economic growth?

In 2009, the government of Lebanon committed to achieving 12% renewable energy in its energy mix by 2020. Lebanon demonstrates a high-capacity potential, exceeding our electricity demand for years to come through the deployment of three renewable energy technologies: hydropower, wind power, and solar power. We would also like to implement another renewable energy target—specifically 20%—by 2030. We also know that renewable energy investments incur high costs for government. In Lebanon, however, it is expected that producing electricity from renewable energy sources will be less costly than from conventional thermal power plants. Moreover, we might look at de-risking these renewable energy investments to allow even further market penetration of clean technologies. Looking at conventional energy, the future prospect of natural gas extraction in Lebanon plays an important role in energy security and economic growth. Moreover, the removal of fossil fuel subsidies through a gradual phase-out will inevitably alter the national fiscal deficit; for example, if the phasing out had occurred in 2013, it would have reduced the fiscal deficit from 9.4% of GDP to 3.8%, which is substantial as these funds could have been invested in sustainable public transportation, healthcare and education, benefiting the lowest income categories, for example. If renewable energy sources are incorporated into Lebanon’s energy mix within the scope of Lebanon’s environmental pledge, and Lebanon becomes independent in terms of conventional sources of energy by extracting natural gas, and if a fossil fuel subsidy phase out is considered, the overall cost to the economy will be reduced. This would consequently boost growth in terms of employment, sustainability, and overall economic health as government funds are reshuffled and reprioritized. That is the essence of the low-emission economy we are aiming towards.