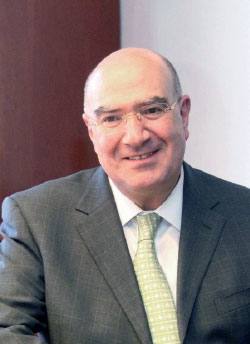 Juan José Guerra Abud has an educational background in electrical mechanical engineering, economics, and fundraising. He was Secretary of Economic Development between 1994 and 1999 and a member of the Mexiquense Infrastructure Council in 2007. Since December 1, 2012, he has been the Secretary of Environment and Natural Resources.

Share on:
The latest National Institute of Ecology and Climate Change (INECC) figures show that Mexico released 748 million tons of carbon dioxide equivalent (MtCO2e) in 2010, which represents 1.4% of the […]

The latest National Institute of Ecology and Climate Change (INECC) figures show that Mexico released 748 million tons of carbon dioxide equivalent (MtCO2e) in 2010, which represents 1.4% of the world’s emissions. What specific programs is SEMARNAT implementing to reverse this trend?

On April 28, 2014 the Secretariat of Environment and Natural Resources (SEMARNAT) launched the Special Climate Change Program 2014-2018 (PECC). The PECC is one of the policy planning instruments derived from the General Climate Change Law (LGCC), and is aligned to the National Development Plan (PND), cross-sectional programs from the federal government, and the sectorial programs from 14 federal ministries that participate in the Inter-Ministerial Commission on Climate Change. The PECC lays out a diagnosis of the present situation of Mexico regarding climate change. It comprises five objectives, 26 strategies, and 199 lines of action, of which 77 focus on adaptation, 81 on mitigation, and 41 on the construction of public policies for tackling climate change. It also includes an annex with 31 complementary climate change-related activities and 10 performance indicators to monitor the results of the program during the 2014-2018 period using a 2013 baseline, a 2018 goal, and a calculation methodology. The PECC aims to reduce the vulnerability of the population, ecosystems, and productive sectors to climate change, as well as increase resilience in strategic infrastructure. This program presents the federal government’s contribution to the greenhouse gases (GHG) emission reduction indicative goal prescribed by the LGCC for the 2014-2018 period, specifically 30% GHG emission reductions with respect to the business-as-usual scenario by 2020.

What is going to be the impact of the pilot program for using natural gas in transport that SEMARNAT recently launched?

The pilot program is considered a part of the National Development Plan 2013-2018, and aims to strengthen national climate change policy and environmental care for the transition to a competitive, sustainable, and low-carbon economy as well as to reduce risks to health and mitigate the emission of compounds and GHGs. As a starting point, a pilot program has been established in the city of Monterrey, which will equip the latter with the largest natural gas infrastructure for vehicular use in the country, both in number of compressor stations and transport units that use natural gas vehicles. The pilot project aims to be implemented in the metropolitan area of Monterrey, and pursues the goal of 8,000 vehicles using natural gas in the medium term, of which approximately 18% will be taxis, 38% heavy vehicles (including passenger and heavy duty trucks or light duty trucks), and 44% light vehicles. The environmental benefits of using natural gas, relative to gasoline and diesel, for example, are there. Decreases were recorded in the range of 25% for CO2 emissions compared to gasoline and 35% compared to diesel. For mono-nitrogen oxides (NOx) and carbon monoxide, emissions are estimated at being 35% and 95% lower, respectively. In the case of sulfur dioxide, the reduction would be 100% using natural gas. Other benefits include not contaminating soil or groundwater, while combustion is practically odorless, and the noise level is much lower than for conventional motors.

You recently defined the energy reform as an environmental reform. What will be the contribution of the new regulation in attracting investment for renewable energy?

The energy reform established obligations of clean compounds and reductions in GHGs and energy for participants in the electricity industry. The renewable resources are sufficient to double the installed capacity so far and to meet the goal by 2024 to generate electricity with 35% renewable energy capacity. The transition to renewables in terms of economic costs is not higher compared to conventional sources, especially when considering their co-benefits, including not depleting a non-renewable natural resource like natural gas, which can be made available for better uses in petrochemicals. The old fuel-oil plants will be gradually updated, operating with cleaner fuels such as natural gas, which is less harmful to the health of the communities living in the vicinity of old thermal power plants. In the long term, it will mean huge savings by avoiding energy losses in transmission and distribution, and this will be the true reduction in electricity rates for much of the population. It will also be positive for GDP, the generation of jobs and tax revenues, if 60,000 GWh of renewable technologies were to be developed by 2024. About 150,000 jobs would be created, similar to the current workforce of the Federal Electricity Commission (CFE), considering retiring employees and assets, and the tax revenues would total $23 billion.