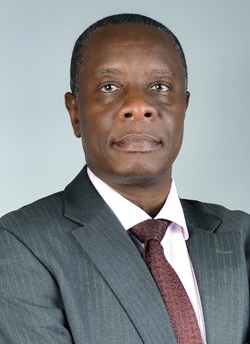 Dr. Mupanga Mwanakatwe brings to Zamtel over 30 years of telecommunications engineering experience in Zambia and Europe. He holds a BSc. (Hons.) degree in Electronics (Middlesex Polytechnic, UK), MSc. Telecommunications Systems (Essex University, UK), and PhD in Satellite Communications (Surrey University, UK). He is a fellow of the Engineering Institute of Zambia, a fellow of the UK Institute of Engineering and Technology, and is a UK Chartered Engineer. He was a Beit Trust Fellow during his doctoral studies done in conjunction with the European Space Agency on the experimental Olympus Satellite communications payload.

Share on:
"The farmer in the field can get paid with mobile money without having to travel long distances."

I think it is a combination of factors. There was a measure of investment that had never before taken place in the company. Despite being established in the country for a 100 years, Zamtel was slow off the mark when it came to developments in GSM with other players, such as Airtel and MTN, getting in there first. Zamtel was the third company to come to the party, and I don’t think that sufficient investment was made in terms of infrastructure. This is a numbers game, which means you have to have the capacity and the coverage. You need both to win. If you are slow in the market that invariably constrains how many people can come onto your network. Being the third provider to arrive cost us dearly. Having said that, the numbers have grown quite phenomenally over this period to where we are today.

How important has innovation been to this growth?

It has been quite fundamental, since without technology you cannot compete. For example, we are in the final phase of a rollout of over 400 base stations. All of these are 3G high-capacity base stations and are also LTE-ready. As we roll those out to Lusaka, the Copperbelt, and Livingstone, we will decommission the smaller capacity 3G-only base stations and deploy those in rural areas. That allows us to leapfrog our competitors and have a network that is almost entirely LTE ready.

“The farmer in the field can get paid with mobile money without having to travel long distances.”

Is this aggressive expansion plan only taking place in the rural areas?

No, it is in both rural and urban areas. A number of the sites we have been putting up replace what exists currently in the urban areas with high technology, high capacity LTE-ready cell sites and also fill in any gaps. If you don’t have enough sites, you might find you don’t have enough coverage. You need to plug in all those holes to have a more-or-less continuous or ubiquitous coverage over the whole area. Lusaka should have excellent 3G coverage everywhere, and Kitwe, Ndola, and Livingstone should have seamless coverage. You have got to ensure that those are sound in terms of coverage and capacity. Having done that, if the technology you are deploying is also LTE ready, that allows you to leapfrog and start deploying LTE technology quickly, which in turn means extremely fast data.

Zamtel is carrying out a huge investment to improve its network. What opportunities do you see for foreign investors in building the telecoms network?

That is always there, certainly. Zamtel will have quite a lot of capital expenditure over the next two years. These tenders are normally open to international companies; hence, the opportunities are there for large, medium, and small companies to participate, whether in the supply of equipment or the provision of consultancy services. We certainly need good suppliers from all over the world. We try to get the best technology at the best price. For example, we have equipment from Japan, China, and Europe. It is an open tender process provided you meet the specifications technically and commercially, which is good because it makes it competitive.

How would you assess the competition in the telecom sector in Zambia, and how does Zamtel stand out from its competitors?

The competition is fierce and aggressive, and tends to go in phases. For example, when we first launched GSM in Zambia, we had big handsets costing almost $1,000 and the rate was around $1 a minute. That was Phase I. We have now have affordable cell phones that an ordinary person can buy for $10. As you roll out your network, the capacity is there and the coverage is there. The cost of the handset has been brought down to a reasonable level; however, there is no point in having a phone if you cannot afford the tariff to use it. Therefore, Zamtel did something that was quite disruptive in the market and had never been done before—we launched a product called the “Real Mahala,” which colloquially means “freebee.” This product allowed you to have 90 minutes of on-net calls during the day, and from 10.00 pm to 6.00 am you could talk for free to any Zamtel user. We also had a spinoff of that which gave you a 50% discount on off-net calls. As a result, in July and August 2013, we had an excess of 200,000 subscribers per month. These subscribers were ordinary people who had the $10 handsets, but could not afford the usual talk time rates. Our price was only about 50 cents to talk as much as you wanted, and that really was a game changer. People loved that product.

Do Zambians move easily from one mobile operator to another?

It is not so much a case of customers changing from one company to another, it is more that they double or triple the number of their SIM card. Sometimes the penetration levels are a bit skewed because one person might have three SIM cards. They tend to have a primary SIM, then a secondary one. In that regard, I think Zamtel has been quite effective in the marketplace, and we have seen the benefits accrue. Nevertheless, what is important for us is to have good coverage, good capacity, and make the products and services affordable. The next trend that should happen is that now people have affordable handsets, we want data usage—people on the internet. We need smartphones that are affordable. Instead of smartphones costing $500, if that cost together with the cost of the internet came down, it would bring about a second revolution. The first revolution was carried out quite effectively. Now, the second revolution is to make smartphones and data affordable for even schoolchildren in villages. The whole world will open up if we do that.

What is the potential for smartphones in Zambia?

There is a huge potential. Even when we look at our traffic statistics at the moment and how our data traffic is growing, it is phenomenal. Similar to the Real Mahala for talk time, we had another product that we just stopped running, which was called Yagemuka Mahala. This product gave the customer 1GB of data free everyday if you enrolled in the Real Mahala. The aim was to encourage people who had never used data before to try it for the first time. We ran this for a period of time and it was extremely successful.

Mobile money has been a revolution in some African countries, and Zamtel is about to launch its services. What opportunities do you see for mobile money services in Zambia?

We are going to launch something in 4Q2014. The hardware has not been delivered yet, and we are still in the final processes of the contract. I think there are many opportunities, for example in Kenya where m-pesa has been a huge success. The number of people who are unbanked in Zambia is huge, too. If those people can be given products that are affordable and easy to use, such as on a simple phone, we can see the unbanked becoming banked much quicker than would normally be the case. That would be the smart way to go. The traditional way of bricks and mortar branches of the banks in every single place just doesn’t make economic sense anymore. This also absolutely helps the national goal of financial inclusion. The farmer in the field can get paid with mobile money without having to travel long distances to the nearest bank and queue up for days.

Do you expect the internet penetration levels to grow in the next five years?

Yes. If you look at the current figures for data growth, it is exponential, at least on our network. It is very high and I expect that to increase. As we roll out fiber to homes and premises, it will make sure that homes and businesses have internet access. For example, we recently commissioned a government-wide area network, which has put all the ministries together and made a closed network for them on fiber optic. We are providing them with a pipe of 200 MB of internet capacity, which is then distributed to all the ministries. That is growing as the government and ministries use the internet more. Also, what is important is the optic submarine cables that we have on the west and east coasts. It’s always been a challenge for us to land that, though, because we are inland. It is a challenge to bring that capacity in from the coast to here. It can be quite expensive. If you are on the coast it is okay, but if you have to pass through two or three countries to bring it here, it starts to become expensive. We are hoping that those prices will also be driven down. Generally, internet prices are going down every year, but they need to go down on the cable and on the inland link.