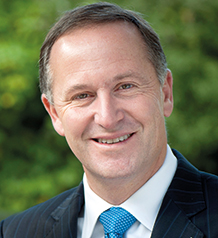 Prime Minister John Key has been the Prime Minister of New Zealand since November 2008 and Leader of the New Zealand National Party since November 2006. Born in Auckland, he grew up in Christchurch, and attended Burnside High School and then gained a Bachelor of Commerce from the University of Canterbury. He launched his investment banking career in New Zealand in the mid-1980s. After 10 years in the New Zealand market he headed offshore, working in Singapore, London, and Sydney for US investment banking firm Merrill Lynch. In 1999, he was invited to join the Foreign Exchange Committee of the Federal Reserve Bank of New York and on two occasions undertook management studies at Harvard University in Boston. In 2001, he headed back to New Zealand to fulfill a long-held ambition to stand for Parliament for the National Party.

What makes Malaysia an important diplomatic, economic and security partner for New Zealand?

Malaysia is an important partner for New Zealand for a number of reasons. In economic terms, Malaysia is our eighth largest trading partner overall, and our second largest within ASEAN. And in terms of security, Malaysia is one of our closest defense partners in the region, a relationship that is underpinned by our longstanding cooperation on defense and security issues. We are both members of the Five Power Defense Arrangement, which is the cornerstone of New Zealand’s defense and security engagement in the region. As our shared term on the Security Council gets under way, New Zealand will be working closely with Malaysia as fellow non-permanent members to represent the interests and concerns of the Asia-Pacific region. In addition, our close economic ties have fostered strong people-to-people links in many areas. Many New Zealand universities have agreements with Malaysian education providers, with around 2,000 Malaysian students currently studying in New Zealand.

What has the effect of the Malaysia-New Zealand Free Trade Agreement (MNZFTA)?

MNZFTA is central to our trade relationship with Malaysia, and builds on the twelve-country Agreement establishing the ASEAN-Australian-New Zealand Free Trade Area (AANZFTA), which entered into force in January of the same year. For the year-ending 2014, Malaysia was New Zealand’s sixth largest merchandise goods trading partner, moving up from 10th place before the Agreement coming into force. Total merchandise goods trade was worth NZ$3.3 billion for the year ending 2014, which represents an increase of NZ$1.5 billion over the past five years. And it is not just merchandise goods trade that has expanded under the MNZFTA. Services exports to Malaysia have also grown since 2010 in a range of high value sectors, such as private education, engineering and IT. Meanwhile, officials from both our countries continue to work closely together to ensure that the FTA responds to the interests of our businesses, and reflects developments in modern trade. For example, Malaysia and New Zealand negotiated an amendment to the Agreement to provide for more modern international invoicing practices. With a growing population of close to 30 million, more trade with Malaysia represents an excellent opportunity for New Zealand. MNZFTA not only enables us to deepen our ties with Malaysia, but also provides New Zealand a foothold in South-East Asia.

How will closer regional integration impact the importance of ASEAN for New Zealand?

New Zealand strongly supports ASEAN’s regional integration ambitions, including its steps towards its Economic Community. It is well known that global and regional integration can result in significant economic and social benefits, and the AEC has the potential to deliver these benefits to ASEAN and the wider region, including New Zealand. New Zealand’s relationship with ASEAN was further strengthened by the signing of the AANZFTA in 2009. This year marks New Zealand’s 40th anniversary of engagement with ASEAN. If we consider ASEAN as a group, it is already New Zealand’s fourth largest trading partner, and our second fastest growing trading relationship among our top ten partners—and this is just the beginning. Through the AEC, ASEAN’s economy has the potential to continue developing and become an even more important, open and integrated force in the global economy. We want to work alongside ASEAN to support its integration ambitions and together make the Asia-Pacific a prosperous and leading region.

What do you envisage for the future of bilateral relations between New Zealand and Malaysia?

We will continue to strengthen our relationship with Malaysia by further implementing the MNZFTA, creating more opportunities for our businesses; enhancing our people to people links—especially through education and tourism; continuing to build on the strong ties between our defense forces; and increasing our engagement in security issues of mutual concern, including in the context of our shared term on the United Nations Security Council. New Zealand will also work closely with Malaysia and our other regional partners to support the development of an ASEAN Economic Community.