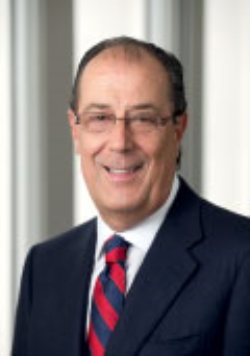 Carlos Ruiz Sacristán holds a Bachelor’s degree in Business Administration from Universidad Anahuac and a Master’s degree in Business Administration from Northwestern University in Chicago. From 2007 to 2012 he served as member of Sempra Energy´s Board of Directors. From 1994 to 2000 he served as Secretary of Communications and Transportation during the government of Mexico’s President Ernesto Zedillo. During this time he was in charge of the restructure of the communication and transportation sectors in Mexico. From 1974 to 1994 Carlos Ruiz Sacristán occupied diverse positions in Banco de México (Mexico´s Central Bank), the Ministry of Finance, and PEMEX. In July 2012 he became CEO of IEnova. Among other positions he is partner at Proyectos Estratégicos Integrales, S.C., as well as of the Board of Directors of Southern Copper Corp., OHL Concesiones México, S.A de C.V, Banco Ve por Más, S.A de C.V., Grupo Creatica, S.A de C.V., Administradora Mexiquense del Aeropuerto Internacional de Toluca, and S.A. de C.V.

Share on:
What is the importance of IEnova’s pipeline project in Sonora? In 2012, the Federal Electricity Commission (CFE) launched a call for tenders to build four pipeline segments that comprise the […]

What is the importance of IEnova’s pipeline project in Sonora?

In 2012, the Federal Electricity Commission (CFE) launched a call for tenders to build four pipeline segments that comprise the North — Northeast pipeline system. The entire system will supply natural gas to the states of Sonora, Chihuahua, and Sinaloa. We participated and won two of the four tenders (the Sásabe — Guaymas and Guaymas – El Oro segments). The construction of these two segments will represent a total investment of $1 billion. The importance of the entire system is twofold. First, the natural gas supplied will allow the CFE to convert its fuel oil based generation plants to natural gas based generation plants. Savings to the CFE from these conversions will be significant. And second, the fact that the entire region will now have access to natural gas at competitive costs, will increase the region’s competitiveness and attract new industries looking to bring their operations to Mexico’s Pacific coast.

In March 2013 IEnova was listed on the Mexican Stock Exchange. What is the significance of this milestone for your company?

As you correctly mention, our public debt and stock placements were a milestone for both the company and for Mexico’s energy sector. We brought to the Mexican market the first energy investment vehicle. The debt and stock offerings had three main purposes: to create a healthier capital structure in order to be in a better position to finance growth, to build the capacity to finance our projects as a stand-alone entity, and thirdly to build a Mexican identity and become a company with Mexican investors. The operation was successful and generated a great deal of interest. We placed around $600 million, and the demand was around 12 or 13 times what was offered for subscription. That showed the market interest in the company, as well as in Mexico’s energy sector.

How do you feel about the energy reforms, and how do you think they will impact your operations?

We are encouraged by the energy reform recently enacted by Congress and signed into law by the President. The final version of the bill came out better than anyone had expected. We believe that this bill will provide the Mexican government with the tools it needs to create a stronger and more profitable PEMEX and CFE, and a more competitive and dynamic energy sector. The provisions in the bill will definitely have a positive impact in our operations. Conditions in Mexico are no longer business as usual, but rather, business in a more competitive and healthy environment. Even though it is still too early to tell how the new dynamics will play out, we are confident that this reform will create a solid foundation for the long-term economic growth of Mexico.

You employ around 300 to 400 people in Mexico. What can you tell us about your efforts to train and qualify the local workforce?

This is a very important question. Appropriately prepared and sufficient people are needed to implement the reform and undertake the projects that derive from it. I think that one of the main assets of this company is the quality of the people that work here, and many of them have grown with the company. Most of our employees are Mexicans, and we have continued training our workforce. However, what really qualifies us is having many experts in each field. We operate large infrastructure projects that are built over time and need to be very efficient, and we will continue to do the same in the future.

Once the reforms pass, do you have your eye on new projects?

We believe that this reform will provide significant new opportunities for IEnova in liquids transportation and storage, natural gas gathering and processing, and in power generation, transmission, and distribution. We look forward to seeing the details that will be included in the secondary legislation.