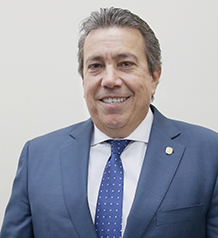 Ramón L. Arosemena Crespo was born in Herrera Province. He studied at Jose Daniel Crespo Secondary School in Chitré, Herrera. He is a civil engineer, certified in Georgia and Florida in the US. He is currently President of the American Engineering Group, founded in 2001 in Miami. He has over 28 years of experience in the construction of bridges, motorways, and toll systems for the Department of Transport of Florida, as well as in administration and inspection of civil works. He is a member of the American Society of Civil Engineers.

Share on:
What are some changes that have allowed the MOP to carry out its mission more efficiently? This administration has worked hard to comply with strict building standards. One of the […]

What are some changes that have allowed the MOP to carry out its mission more efficiently?

This administration has worked hard to comply with strict building standards. One of the main objectives is to achieve the highest quality standards for our civil work. We acquired new equipment to streamline the functions of the MOP and employed the equipment and technology to meet the transportation needs of communities, especially in areas that are difficult to access. With this new equipment, the MOP will expand and strengthen its machinery fleet, and we can effectively support the construction of roads and dredging of rivers and streams, channeling rivers, street maintenance, and other urgent activities. The MOP conducts its bidding processes transparently and all companies can participate fairly, offering competitive market prices. We will proceed with the construction of the Agua Fria-Santa Fe-Canglón-Yaviza Road, which will benefit over 48,300 inhabitants in Darien. We will move forward with the design and construction of vehicular bridges over Potrero River in Arraiján district. We provided technical assistance for the management project of the fourth bridge over the Panama Canal and are currently conducting the bidding process for the design and construction of this ambitious project that will benefit more than 1.7 million people. We continue to manage tender processes to develop new works, with projects such as the study, design, and repair of rural roads.

What is the importance of the Nueva Red Vial de la Ciudad de Panamá project?

The purpose is to create a vial platform to effectively distribute the nearly 600,000 vehicles that pass through the downtown area of Panama City daily and serve as a base system for the Metrobus and Panama Metro. In this sense, we move forward with continuity projects, of which some have been completed, such as the viaduct of two lanes at the intersection of Via Centenario with Avenida Santa Elena and the one-lane viaduct at the intersection of Via Cincuentenario with Avenida Diego de Almagro. Approximately 100% of the repairs and expansion of the Amador Causeway is now completed, including upgrading and expanding four Amador Causeway lanes, and a landscaping study to preserve the recreational and tourist destination. The rehabilitation of the superstructure and substructure of the Bridge of the Americas is now 88.88% completed. The MOP recently opened a bidding process to contract the design and construction of the widening of the Omar Torrijos Road between Corozal and the Centennial Bridge.

How is the MOP working to improve the quality of life in rural areas?

One of our main goals is increasing the connectivity of all the communities around the republic via efforts to optimize the economic and social development of people. We run various projects within the country, including repairs to the Puerto Armuelles Internal Road in the district of Baru, Chiriqui, which will provide greater security and accessibility to the public and help with the government’s efforts to revive the banana zone. This 36,153km work includes the design and construction of 17 vehicular bridges over streams or channels, of which 13 will be placed on the existing alignment and four on a new alignment. We will incorporate the communities of northern Veraguas in the country’s development by implementing the construction project of the Guabal-Rio Luis-Calovébora Road for the benefit of over 17,000 inhabitants. Repairs to the Cerro Camino Sombrerot-Chichica Road, and the design and construction of the Chichica-Cerro Miel-Peña Blanca-Llano Tugrí­ Road, will improve access for inhabitants of the Ngäbe-Bugle region and help to improve their health, education and housing situation. We continue to conduct repairs to the Las Pipas-Llana Arriba-Pitaloza-La Mesa Road, which will facilitate access and strengthen production of cassava, yam, corn, tomato, and orange, among others. Currently, we are working on the expansion of the Sabana Grande-El Hatillo in the district of Pese. We will continue with construction of roads this summer to facilitate access to basic services, especially for the less well-off, promoting balanced social development.