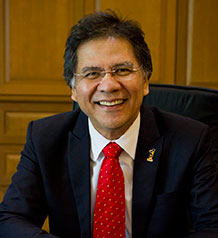 Dato’ Sri Idris Jala was recently featured in Bloomberg Markets’ 50 Most Influential List of individuals who have moved markets or shaped ideas and policies. He was a Member of the World Economic Forum’s Global Agenda Council on New Growth Models and the World Bank’s Panel of Advisory Experts for Competitive Industries practice division. He was also a Minister in Prime Minister’s Office and is currently the CEO of the Performance Management and Delivery Unit (PEMANDU) and Managing Director of BFR Institute. PEMANDU is a unit that oversees the Malaysia’s National Transformation Programme. Previously, Jala spent an illustrious 23 years working for Shell in various capacities, based in Malaysia, the UK, the Netherlands, and Sri Lanka. He led a successful turnaround when he was the CEO of Malaysia Airlines. During the time, he was also a Board member of the International Air Transport Association (IATA).

Share on:
"As we move toward a high-income economy, we cannot close our doors"

What has been the intent and achievements of the National Transformation Program (NTP)?

We plan to transform Malaysia from a middle-income to a high-income nation by 2020. The creation of wealth, inclusivity, and sustainability are the three pillars, with quality of life at the center of these pillars. We are currently on track and are overcoming the middle-income trap. Our actual GNI per capita had a gap of 33% and was not closing for five years. Since we started the transformation programs in 2010, we have narrowed it to 13%. The key factor of becoming a high-income state is to have the private sector as the biggest investor. Government investment is currently 40% versus 60% private investment. Secondly, we wanted to address inclusivity, making sure that we lift the bottom 40%. We changed the way we work here, reducing subsidies and instead providing cash transfers to those whose income is below MYR3,000 per month. Furthermore, we have introduced a minimum wage. We have lifted 2.9 million people out of poverty. Many of our rural living population did not have access to electricity, water, and basic infrastructure. We have touched the lives of 6.1 million people here. The third component is sustainability, where the shifting of the investment balance also plays an important role. Another aspect is diversifying our economy to ensure we do not rely heavily on income from natural resources and become more service oriented. Sustainability is often associated with the environment, and here we are making progress. We have invested heavily in urban public transportation, especially on the MRT project—our greenest project.

The key to collaborating with Singapore in the coming years is the development of the High-Speed Rail. Having the two countries connected means an easy flow of talent and capital, and a general boost of the relationship. We already collaborate with it on other issues; for example, on the construction of our new oil and gas hub in Pengerang, Johor. Singapore has a similar hub just across the border; hence, we will find ways of working together rather than competing with each other.

How does PEMANDU work to push the NTP agenda forward?

Our first role is to promote a new way of working, for which we have designed labs. For example, we ran a series of labs, amongst which was the oil and gas sector, where we invited people from the public sector, as well as the private sector like Shell, Chevron, Exxon, and Talisman. For eight weeks, their representatives are locked inside the lab together with our team from the government service to collectively move the agenda of their industry forward. This is how the plans for Pengerang came along. We also introduce transparency. We want to show the public what we try to establish as greater transparency creates support. The third thing is the introduction of dashboards. Every Friday we have evaluation moments where we measure our progress by means of a traffic light: green for completed, yellow for partially done, and red for incomplete. This helps us institute a new way of working and creates discipline. If an item is red for two consecutive weeks, there is something wrong. Every month, we have committee meetings with the responsible minister. At the end of the year, we publish a report of what has been delivered and what has not. Ministers and the other responsible agents receive scores; the ownership is clear.

As a former Shell executive, what do you envision for the future of the oil and gas industry in Malaysia?

During my 23 years with Shell, the oil price never went over $80; on average the price was $20 a barrel, once even falling to $10. The world must remember that prices are cyclical. People celebrated when the price hit $100 and thought it would stay there. The world is resilient. When prices go down, some countries have to take painful measures to adapt; however, they will readjust to the new situation. All emerging countries have been forced to diversify, to find smarter ways. In Malaysia, we knew this was going to happen. High prices are great for upstream and low prices are great for downstream; you buy cheap and you add value and still maintain a great price, it is natural hedging. That is why we started the petrochemical industrial complex in Pengerang, fully focusing on downstream. Malaysia is well poised to handle this, partly because we managed to anticipate well. The first oil terminal in Pengerang was delivered already in 2014 with Dutch company Vopak. Oil prices then fell and all the capacity was sold out immediately. We are growing at 5% steadily; we could grow at 10%, though that would require taking on government debts for infrastructural projects and we do not want that. We have a mildly expanding economy and we cut our fiscal deficit every year. We want the private sector to invest, to limit the government’s borrowing, grow at a mild rate, and gradually cut the fiscal deficit. We want Malaysia to grow sustainably and inclusively.

What will be the impact of the TPP on the Malaysian economy?

As we move toward a high-income economy, we cannot close our doors—we must open them to trade, imports, and exports. We are completely exposed, and the more exposed one is, the more one must embrace the TPP. We are the second-largest producer of palm oil in the world after Indonesia. Becoming a signatory to the TPP means we can sell our products, without paying duties, in the US, Canada, Mexico, and Japan. The leverage is large. People object to the TPP because they want protectionism. However, we are already an open economy and we are a small nation. This makes us completely dependent on trade. We should not be intimidated by external competition and instead, we should have confidence in promoting our products as the modern-day world demands the best performances. Take the example of Scandinavian countries, which have only small domestic markets; they have however managed to become high-income economies because of their open policies. I am a great believer in the TPP and in liberalizing global trade in general. Prices for medicines will come down and access to medical facilities will be broader. Vaccination will be cheaper. We could greatly reduce mortality. The Copenhagen Consensus Centre did an analysis on the UNDP work, stating that of all activities, the greatest impact on sustainability in governments comes from free trade.

What are your ambitions for PEMANDU?

The next five years will be key to ensuring that these new ways of working becomes institutionalized. We want the private sector to take up responsibilities to continue catalyzing growth, and have government agencies adopt the lab technologies and rigor in dashboard monitoring. Once this is achieved, PEMANDU’s role will naturally diminish and have served its purpose.