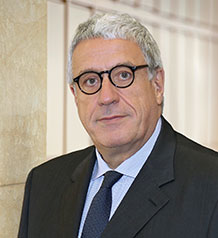 Dr. Freddie C. Baz joined Bank Audi in 1991 as advisor to the Chairman and founded the Secretariat for Planning and Development at the Bank. In addition to his duties as Vice Chairman and General Manager of Bank Audi and Group Strategy Director, he held the position of Group Chief Financial Officer from 2006 to 2015. He is also the Chairman of the Board of Directors of Bank Audi France, a shareholder and board member of Istanbul-based Odeabank, and a member of the Board of Directors of several other affiliates of Bank Audi. Furthermore, he is the General Manager of Bankdata Financial Services WLL, which publishes Bilanbanques, the only reference in Lebanon that provides an extensive structural analysis of all banks located in Lebanon, in addition to other specialized periodicals and reports. He holds a PhD in Economics from Paris Sorbonne University.

Share on:
"In the near term, we are keen on strengthening our market shares in Turkey and Egypt."

What were the milestones for Bank Audi during 2015 and how would you assess the Group’s overall performance?

Bank Audi achieved a good performance last year, despite persisting regional uncertainties affecting our three pillar markets of Lebanon, Turkey, and Egypt. We had a 15% increase in the Bank’s consolidated profits, which is attributed to all main entities rather than to a single one. We have adjusted our operating conditions in a way to improve our spreads, to enhance our non-interest income generation, and to limit increases in our operating expenses. Breaking down the consolidated performance over the main markets, Bank Audi (Lebanon) witnessed an increase in net earnings amid sluggish economic conditions, mainly as a result of achieving productivity gains and improving efficiency. In the case of Turkey and Egypt, our operations were supported by relatively good economic performances, with each market achieving real GDP growth of around 4% translating into a double-digit banking activity growth. Within this context, Bank Audi’s operations outperformed the domestic banking sectors in both markets in terms of asset growth, loan growth, and deposit growth, adding a few basis points of market shares for our subsidiaries. Growth in revenues has accordingly more than compensated the negative impact of the depreciation in the exchanges rates in both markets, with the Egyptian pound depreciating by 10% and the Turkish lira by 25% in 2015, translating into a 15% increase in nominal net earnings.

How did Bank Audi work through these currency devaluations?

The exchange rate correction that both Egypt and Turkey recently went through did not affect our overall economic performances in both countries as witnessed by their relatively high growth rates. It also did not have a material impact on businesses, mostly due to a structural effect as 75% of our Egyptian activity is denominated in local currency, while the ratio reaches 50% for our Turkish operation. Having most our capital denominated in local currency minimized the impact of these currency corrections, since limited lending in US dollars reduces the risk of impaired loans. When looking at the evolution of our non-performing loan ratios in both markets, they improved in spite of the magnitude of currency correction. In all cases, correlation of NPLs in both markets with GDP growth rates is much higher than their correlation with exchange rates.

Odea Bank became a top-10 bank in Turkey in less than four years. What was your strategy to build up Odea in the Turkish market?

Our strategy for Odea Bank has been focused on making it a real challenger bank in Turkey. The concept comes from doing more by using less, from building state of the art infrastructure able to quickly support our franchise building in terms of accounts, customers, loans and deposits, and credit cards. Today, Odeabank has established a universal banking model and market leading productivity levels as well as strong brand recognition and customer awareness. We rank ninth in the general spectrum of banking institutions in the country, and we have a larger portfolio than global banks with over 25 years of presence in Turkey. We have remained realistic about our potential in the Turkish market, and we have lingered between tier two and tier three banks. Now, we aim at becoming number seven among conventional private banks in the country, which would position us between the lower range of tier two banks and the upper range of tier three banks.

In the near term, we are keen on strengthening our market shares in Turkey and Egypt, while maintaining our leadership in Lebanon. We are looking as well to launch operations in Iraq through a branch network this year. In the medium term, after achieving our targeted market shares in Turkey and Egypt we intend to explore further regional expansion opportunities including a presence in Latin America and Sub-Saharan Africa, capitalizing on the Bank’s existing turnovers in those regions. Furthermore, we plan to establish a footprint in the United Kingdom through a light structure to support the private banking development strategy. Our private banking franchise, which represents the fourth development pillar, actually operates through three main entities in Lebanon, Switzerland and Saudi Arabia with additional offices in Monaco, Qatar, Jordan, and the UAE.

You have been outspoken about the harm cash inflows and domestic-driven growth cause to the economy. How can this trend be reversed to trigger larger growth rates?

Lebanon has permanently suffered from Dutch Disease, caused by the big brain drain the country faces and the subsequent remittances the Lebanese diaspora send back to their homeland. This has created a high dependence on foreign inflows that represent an important share of disposable income in Lebanon relative to domestic income, fostering an import economy. Domestic consumption represents 77% of GDP, with imports accounting for an average of 35% of GDP. This has created a vicious cycle of overdependence on inflows to finance domestic consumption, a system that has been resilient so far but that is unsustainable in the long run. Lebanon’s growth drivers should shift from domestic demand to external demand, from consumption to exports, as this would generate higher quality growth rates with respect to job creation. Efforts to initiate such a positive shift have so far been insignificant.

What steps does the country need to take to turn into an export-driven economy?

Lebanon needs efficient, basic utilities such as electricity, water, telecommunications, and transport. The government capital spending on infrastructure has been hovering around 1.2% of GDP over the past half a decade, against an average of 5% for emerging markets. The evident challenge facing the Lebanese policy makers is to ensure necessary infrastructure upgrading without putting at stake fiscal consolidation requirements at large. Adjusting fiscal imbalances in order for real interest rates to go down is important in this direction. It is also a matter of political commitment to guarantee basic infrastructure and put the necessary reforms and the right adjustment plans in place to ensure macroeconomic efficiency.

Bank Audi has been a major supporter of entrepreneurial initiatives in Lebanon. What have been your main contributions to this sector of the economy?

We were the first bank to invest and promote incubators and facilitators for startups nearly 15 years ago. We used to have the largest share of financial investment in this promising sector compared to other banks in the system with an investment portfolio of $100 million. In fact, prior to the issuance of the BDL program, Bank Audi invested in four local and regional funds as well as incubators. The BDL initiative, which was launched in August 2013 with the issuance of Circular 331, reinforced the bank’s vision in investing in startups. The bank took the lead in promoting this initiative, being the largest provider of capital with $106 million of funds eligible to be directly or indirectly invested in financing local innovative and promising businesses. This is driven by our belief that the knowledge economy is one of the most significant potential drivers of the domestic economy at large, along with the financial sector and the energy sector. Nonetheless, we have to recognize that all those efforts still represent a tiny share of the total financing in Lebanon. The current consolidated level of investment in the sector is less than $400 million, while bank loans to the domestic economy represent $48 billion. This means that less than 1% of the country’s financing is being channeled to this promising sector and the country has to build up more momentum to foster people’s creativity and add value to this segment of the economy.

What is your vision for the economic development of Lebanon for 2016?

Looking back at 2015, we can say the actual macroeconomic performance did not match the potential of the Lebanese real sector on the back of an economy with large cyclical output gap, operating at less than 80% of its full-employment output. The country somehow avoided a recession and achieved an average real GDP growth of 1% last year, a weak growth by the country’s development standards. Such a sluggish trend that has constrained local economic growth, mainly at the level of domestic capital formation and net foreign demand, is still there and its shadow is impeding Lebanon to grow further in 2016 and beyond. We will probably witness another year of delays in the potential economic upside of Lebanon with a significant cost to the country’s economic prosperity, but we will not witness any significant shocks and lashes to the domestic economy. The challenges that lie ahead are much more an issue of delayed upside rather than downside risks. Having said that, opportunities do exist and are tied to the fact that Lebanon did not lose its intrinsic survival and resilience features and still maintains a capacity to regain strength and momentum. This is mostly tied to a potential improvement in the overall political environment that represents the key for Lebanese corporate and institutions to regain their normal status and their potential productivity and for the economy to regain confidence and faith putting an end to the gradual meltdown it underwent for the past half a decade.