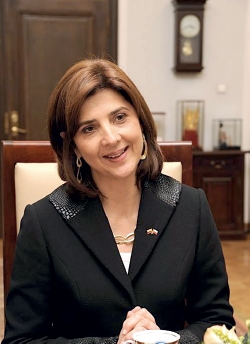 No Man is an Island

Marí­a Ángela Holguí­n Cuéllar is a graduate of Political Science and has two decades of public and private sector experience. She has held high positions in the government, including at the Office of the President of Republic, the Ministry of Foreign Affairs, and the Office of the Inspector General of the Nation. As part of her broad professional experience in the diplomatic field, Marí­a Ángela Holguí­n Cuellár has held, among others, the positions of Vice-Minister of Foreign Affairs of Colombia and Deputy Minister (1998), Ambassador and Permanent Representative of the Colombian Mission to the United Nations (2004—2006), Ambassador of Colombia to Venezuela (2002—2004), and Commercial Attaché of the Embassy of Colombia in France (1992). In addition, she was Coordinator for Colombia of the IADB Assembly and Inter-American Investment Corporation (1997), and Executive Director of the Latin American and Caribbean Regional Conference on Early Childhood (1997).

What have been the landmark achievements of the period in which Colombia chaired the Pacific Alliance?

The Pacific Alliance is a fundamental part of the strategy to position Colombia in regional integration initiatives as well as outreach to the Asia Pacific region. One of Colombia’s foreign policy priorities has been to strengthen and consolidate this Alliance. Between May 2014, when the VII Presidential Summit of the Pacific Alliance was held in Cali, and June 2014, the date on which Mexico took over the presidency of the Alliance during the IX Summit, Colombia was President Pro Tempore of the Alliance. During this period, we led the negotiations of the Trade Protocol of the Pacific Alliance Framework Agreement, signed in February of 2014 in Cartagena de Indias, and is one of the most important and visible achievements of the Alliance. Another vital aspect of the Alliance to highlight is private sector involvement in the process.

What plans does the Ministry have regarding other partnerships such as UNASUR and CARICOM?

Colombia is actively involved in UNASUR as we consider it the right platform to strengthen political dialogue and promote cooperation, as well as the economic and social development of South American countries. It is also a mechanism to carry out actions, programmes and integration initiatives in areas such as infrastructure, health, energy, education, and culture, and against transnational organized crime. Moreover, UNASUR has played an important role in supporting and monitoring electoral processes that have been carried out in the countries of the region. As for the Caribbean Community—CARICOM, Colombia is an Observer State.

How do you assess the benefits of the FTA with the US?

More than 1,600 companies that had not sold anything to the United States between May 2010 and December 2011 did so within 20 months of the agreement coming into force. Most of these companies (75.9%) are from the manufacturing sector, 12.9% are dedicated to clothing manufacture, while others (10.2%) produce agro-industrial goods and a small number (1%) provide editorial services.

Since May 2012, when the Agreement came into force, 350 products not traded between both countries in the two years prior to the agreement have been marketed in the United States. In those 20 months, the country sold to the US market a total of $32.2 million, among which, 82.4% are mining and energy exports and the remaining 17.6% are agribusiness, industry and agriculture products. Imports totalled $26.200 million, of which over 90% includes machinery, raw materials and intermediate goods and 80.7% of these imports are goods that are not produced in the country.

What have been the main achievements of your government regarding environmental issues?

One of the main achievements is the encouragement and leadership of Colombia in the process of formulation of Sustainable Development Goals as part of the new post-2015 UN Development Agenda. Here, we seek to generate structural changes in our economies and societies to irreversibly overcome poverty and preserve the planet. Under Colombia’s leadership, the Independent Association of Latin America and the Caribbean (AILAC) was established as a formal negotiating group of the United Nations Framework Convention on Climate Change to move towards development models with lower carbon emissions resilient to the adverse effects of climate change. Among other key moments, in April 2014, Medellí­n hosted the VII World Urban Forum (WUF VII), considered historically the most successful. The forum sent a strong message to the world through the Medellí­n Declaration, highlighting the importance of cities in the new development agenda. Regarding chemicals, we signed the Minamata Convention on Mercury, along with 94 counties. We have been awarded the “Mercury Club Bronze Award” from the United Nations Environment Programme (UNEP) for being a leading country in the negotiation process to mitigate the adverse impacts of mercury on the environment and human health. We hosted the 10th Conference of the Parties to the Basel Convention, the so-called miracle of Cartagena for achieving the landmark agreement that prohibits developed countries from exporting hazardous waste to developing countries.