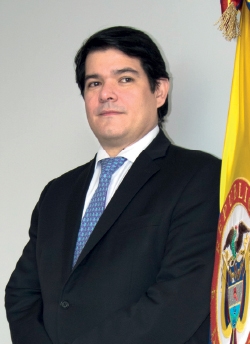 Javier Betancourt Valle studied law at the Universidad Javeriana, specializing in international contract law, financial legislation at the Universidad de Los Andes, and received a Master’s degree in International Business and Commercial Law from Fordham University in New York. He has worked for Colmena, Banco Caja Social, Equión, and BP Exploration Company Colombia. He has also served as consul in New York. He presided over the awarding of 50 major E&P and TEA contracts in 2012, which will generate an estimated investment in Colombia of over $2 billion.

Share on:
The fiscal terms for E&P activities in Colombia are considered one of the most interesting in the world. Why do you think that is the case? The ANH has a […]

The fiscal terms for E&P activities in Colombia are considered one of the most interesting in the world. Why do you think that is the case?

The ANH has a contract for E&P activities, and a second contract to undertake technical evaluations (TEA) over specific areas. Contracts are awarded through an open bid process, by which participants bid by offering a share of their future production to the ANH and additional investments to the established minimum exploratory program. The current fiscal model includes royalties (set by law and non-negotiable), participation of the ANH, area rental fees and a high price payment clause, which is a type of windfall profit tax collected directly by the ANH. It’s worth mentioning that studies by independent agencies and reviewers have stated that Colombia is one of the most competitive fiscal regimes in the world. The price for farming into an onshore contract for conventional exploration in Colombia is basically the same as in Texas, which is one of the most efficient and competitive markets in the world. Regarding unconventional and offshore resources, which are clearly frontier opportunities, we hired expert consultants to give us advice on how to increase competitiveness in these markets. First, in 2012 and taking into consideration a study from IHS, we modified the high price payment clause for unconventional blocks, in order to increase economic incentives. This clause is triggered by two factors: price and cumulative production. The price trigger was raised from $42.54, to $81 (currently at $87.48), while the cumulative production remained unchanged at 5 million barrels. We also extended the exploration period from six years to nine years consisting of three phases of three years each, and extended the production period from 24 years to 30 years. Abandonment of the areas is only until the end of the exploration period. Furthermore, a reduction in royalties was passed by law, making royalties for unconventional resources 40% less than the rate for conventional fields. In the offshore segment, we commissioned a study by Wood Mackenzie last year, knowing intuitively that we were not particularly competitive in the offshore segment. Based on this study, we again addressed the high price payment clause. For deep-water exploration (depths from 300m to 1,000m), the price trigger was raised from $42.54 to $82 and cumulative production was raised from 5 million to 200 million barrels. For ultra-deep waters (depths over 1,000m), the price trigger was raised to $100, and cumulative production to 300 million barrels.

Colombia produced an average of over a million barrels of oil in 2013, with a 6.6% increase in the production of crude compared to 2012. What sort of production do you expect for the next few years?

A significant share of the state’s fiscal resources stem from hydrocarbon production (approximately 25% of national income), so it’s important to increase production. However, our principal goal is to increase reserves. I think production will be stable in the years to come, but as we incorporate new reserves, we will start going beyond the difficulties we faced in the past, and surely an increase in production will follow.

The ANH is to auction 18 million hectares for exploration in 2014. What areas will be included in this auction?

Ronda Colombia 2014 is comprised of two stages. The first stage has 95 blocks, 19 of which are offshore, 18 are unconventionals, and 58 conventionals. Of those 58 conventional blocks, 11 are the so-called discovered undeveloped deposits. These are small blocks that companies have declared non-commercial or undeclared discoveries. We believe that YD blocks offer a low-risk opportunity that will certainly catch the eye of smaller service companies due to the exploratory program’s flexibility. During the first phase of the program, companies will review and reprocess information about the blocks, and then decide whether to continue exploration efforts or to withdrawal from the contract. In the second phase, operators are obliged to drill a well, or enter a pre-existing well. The second stage that is set to take place during the second semester of 2014 will encompass exclusively Coal Bed Methane (CBM) opportunities, of which there are eight blocks.