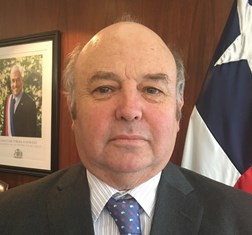 Domingo Arteaga is an industrial chemical engineer with over 30 years of experience in high-level positions in a wide variety of companies. He was General Manager of Cannex, a company dedicated to the commercialization of preserved seafood, for 10 years. He was also the main partner in Viñedos Nerkihue, among other companies.

Share on:
Chile and Mexico plan to continue to work closely on many issues, including transparency in government and fighting corruption and drug cartels.

What are your main commercial and diplomatic objectives in Mexico at the moment?

Chile and Mexico have strong ties that go way back both on the commercial and cultural fronts. Both countries share the same perspective on how the world should be, and Latin American countries have a unique geopolitical job. One of the things we have to focus on is helping each other. Mexico has a brand-new government with many changes to come. We are witnessing this from a unique point of view and are interested in whatever path Mexico takes. We look forward to having a great deal of collaboration in many issues, including transparency in government and fighting corruption and drug cartels. One of the most important aspects is understanding Mexico’s experiences so that we can cope with similar issues in our own country, and vice versa. We have been working with some of the states in Mexico through the Chilean Embassy, and the governors have been interested in sharing their experiences regarding policing with us. In 2019, we will celebrate the 20th anniversary of Mexico’s first FTA, which was with Chile. It was one of Chile’s first FTAs as well. It has been working extremely well, though the world has changed significantly since, and we need to update the treaty. This will have to be on the agenda of both governments in 2019.

How has geopolitical volatility deepened the ties between Chile and Mexico?

Both countries should take a look east and west to deepen relationships; for example, Asia is an important part of the world for Chile. Our strategy has been to turn to the Pacific Ocean and stretch our view all the way to the other side. There is China and India, as well as countries such as Malaysia, Indonesia, Vietnam, and Myanmar. Even without India and China, there is a large market. Our cultures are all so different, and there is a great deal to learn and knowledge to be exchanged. Chile has been making a major impact exporting cherries, berries, and other products to China for the last three or four years. Mexico can now do the same, but bigger and better. Currently, the US accounts for 86% of Mexican exports. However, recent events show it is always wise to look in more than one direction. Chile’s current biggest export market is China, at 24%. Then, we have the EU, Mexico, the US, and many other parts of the world. In this way, we seek to lower our risk and ensure that as a small country we can still survive and make things better for our own people even if the global economy is hit.

What sectors and industries are you focusing on in 2019?

On the commercial side, mining is still extremely important and a growing business between Mexico and Chile. We will not invest in mining in Mexico; we will leave that to the big players. However, Chile has a long history of mining, mainly copper. We have been able to develop experienced mining supply chain services in many different ways. Our biggest mining operation is state-owned, though the rest are all private. There are a huge number of SMEs in Chile providing services to the mining industry for many years, and there will be new opportunities for Chileans to invest in mining services in Mexico. In terms of other sectors, Chile exports a significant amount of fruit to Mexico. We do not have any problems in terms of competition with the fruit producers in Mexico, because our seasons are different; however, the service chain from our production to consumers in Mexico is slightly faster. We will have to look deeper into that as well, namely ports, transportation, and certification. This is a challenging issue, given that fruit is a perishable product. We have to ensure that the entire supply chain from the producer to the consumer runs smoothly.