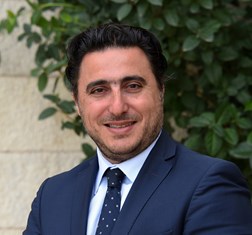 On a New Trajectory

Fouad Zmokhol holds a doctorate in business administration from New Port University in the US. He was president of the Lebanese Businessmen Association (RDCL) from 2011-2016. Seeing the need to promote this mission on the international scale, he founded and chaired RDCL World in 2017. He is the CEO and Co-owner of Zimco Group, a holding that integrates a printing press, leather factory, diary publishing house, and advertising agency. Dr. Zmokhol continues to share his secrets of success and motivational insights as Professor of Managerial Strategies and Entrepreneurship at Saint Joseph University and the Lebanese American University.

Share on:
TBY talks to Fouad Zmokhol, President of the Association of Lebanese Business People in the World (RDCL World), on collaborating more effectively internationally, addressing sovereign risk, and the need for PPPs.

A number of changes have occurred in the organization over the past year. What is RDCL World’s current trajectory?

We aim to build synergies between companies and businesspeople that want to invest in Lebanon and for homegrown businesses to expand into new continents. In line with this goal, we have signed more than 18 MoUs, ranging from Brazil and Mexico to Pakistan and France, and more. We have lobbied hard to maintain our stellar reputation and stress the strengths of Lebanese businesspeople. One of those strengths is that the majority of Lebanese business leaders around the world are entrepreneurs that started from scratch. However, although we are great ambassadors for individual achievements, our capabilities within a group environment become diminished. In light of this challenge, our objective in 2018 is to collaborate more effectively through our network of MoUs with other international chambers and economic associations in a bid to transfer information and knowledge, host investors, synergize, develop support from public offices on both sides, and conduct joint economic missions. The new trajectory is thinking beyond simple competition to complementing each other’s work.

Sovereign risk has always been a part of the reality when conducting business in Lebanon. How can it be addressed more effectively?

Many of the companies we see today in the financial, industrial, and services sectors were established during the civil war where they experienced tremendous growth. At the time, there was extremely high sovereign risk but also high returns on investment of nearly 30%, and with high liquidity in the market. At the end of the war, people believed the risk would disappear; however, it has persisted, with new political tensions, regional tensions, as well as economic and liquidity crises hitting the country. The new reality shows returns at 0-5%, which explains why the country is experiencing low single-digit growth. International investors tend not to invest in a high sovereign risk country with a low ROI. The idea is not just to reduce sovereign risk—public and regional reforms must occur as well.

How do you go about achieving the necessary reforms in such a chaotic environment?

One major way was through the 2018 CEDRE Conference on economic development, which we lobbied for. We approached the CEDRE Conference first to attract and boost investment and to push funds through government support. All the reforms that were agreed and accepted during Paris I, II, and III were never implemented, and for that we need a complete revision of our economic, commercial and judicial laws. If Lebanon wants to receive funds from CEDRE, it has to revise and upgrade its laws and implement reforms, which is why we pushed for the conference. We do not just want the money; our objective is not to raise the debt ratio. We are trying to boost growth by attracting investment and reducing the debt through medium to long-term repayment strategies based on improvement of the GDP, and not by raising taxes.

Will PPP investments be the primary component of renewed economic vitality?

We believe in cooperation and coordination. In fact, most of the projects that we lobby for are PPPs. Another major objective is to rebuild the infrastructure. We are perhaps the only country in the world that has still not rebuilt its infrastructure 30 years after the end of its civil war. Outright privatization would face great pushback, and so PPPs have emerged as the best solution for Lebanon. We did see some positive interest, though a law needs to be implemented to protect the state as well as the rights of investors. RDCL World has in fact helped in drafting this law, though it still needs some refinement following actual application. We have to test it, and we need success stories, as no one will partner with a state without a successful precedent and encouraging insights.