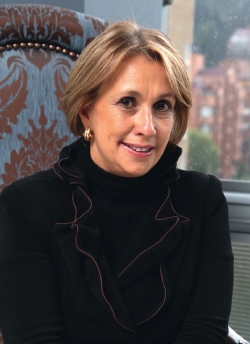 Martha Juliana Silva Ricaurte is a Lawyer and Economist, who graduated from Universidad Javeriana, holding a Master’s degree in Law and International Tax Policy from Harvard University, and Business Administration in Global Economies, from the London School of Economics. Among former senior positions held she was CEO of Fiduciaria Bogotá, Leasing Bogotá; a Representative for a range of Foreign Banks in Colombia; International Consultant for the Development Bank of Latin America and the United Nations, and an Executive Vice President of the Banking Association of Colombia. An expert in real estate development/investment projects, she has managed assets of over $500 million, and 1 million square meters. In February 2010 she founded her own Investment Banking Company and serves as its CEO.

Share on:
What are some of the milestones of your M&A division and your key strengths? First of all, we have a team of formidable experience in all sectors of Colombia. Our […]

What are some of the milestones of your M&A division and your key strengths?

First of all, we have a team of formidable experience in all sectors of Colombia. Our people have worked in the banking, finance, and services sectors for at least 15 years. The individuals on our directive team have to meet three of the four following conditions: they must have at least 15 years of experience; have been a president or vice-president of a large company; boast a great national and international network; and have been working internationally for the past 10 years. Our current group has access to local and international companies. We are identifying Colombian companies that want to grow in their local and regional markets. We look to international investors to invest in these companies. In the past three years, we have closed negotiations valued at over $700 million. We are also involved in the first private-public partnership (PPP) in Bogotá and the Metropolitan Region, a transportation infrastructure scheme, which will be wrapped up in the second half of 2014. I forecast success because the group we are advising has identified Bogotá as representing an opportunity to develop an integrated transportation system in the region. Our team advised specialists from Germany and Spain to participate in the project, which could have a total cost of $1.2 billion. We have a lead time of 18 months for the first line to enter operation.

What aspects of the economy do you consider particularly attractive to foreign investors?

International investors considering Colombia as an address consider the following points. Colombia has a population of 47 million, of which 50% is aged below 50. There are more than five cities with a population of over one million, and the quality of human capital is increasing. Generally, Colombia is more of a proposition than other countries in the region because it is a country of medium-sized cities, including Bogotá, Medellí­n, Barranquilla, Cali, and Bucaramanga. People who invest in this country see that their activity here will be long term because of the age demographics. For example, I work with a Polish company that is one of the largest in Eastern Europe’s food industry. It decided to come to Colombia perceiving a difference from other countries in the region. We were in the best position, geographically and otherwise, to provide a base for future growth in the region.

Latin America led the M&A revival in 2012. Colombia was third overall with $8 billion in transactions in six deals. Could you evaluate Colombia’s M&A activity in 2014 and share your views on the trends you have identified?

The M&A trend will remain stable because many companies remain unlisted on the markets, despite being valued at between $30 million to $300 million. When I add up these transactions, I envisage a stable M&A sector for the next five years. There are 30 companies in our pipeline that are keen to be sold. Together, their issuance value stands at around $1 billion. And while not all of these deals will be closed in 2013, they will be within the next three years. I expect companies in the oil and gas services, transportation, and infrastructure sectors to experience the greatest M&A activity in 2014. I also believe the bulk of capital flowing into Colombia will be coming from the US, Spain, Germany, UK, Venezuela, and some from Poland.

A number of private equity firms in Colombia are scheduled to exit the country in 2014 and 2015. Could you share your views on the private equity industry and its potential for substantial growth?

Five years ago, few private equity firms were coming to Colombia, but now the country’s private equity landscape is set to change drastically over the next few years given the potential for sustainable growth. There are many unlisted companies in the market that are growing. Certain companies, like the Rohatyn Group, do not have offices in Colombia, but rather have established alliances with people like me who know the market and the important players in the local market. Right now, I have relationships with 76 private equity firms in the US, Dubai, Canada, and other places around the world. Most of these companies would favor having a partner with which to penetrate Colombia.