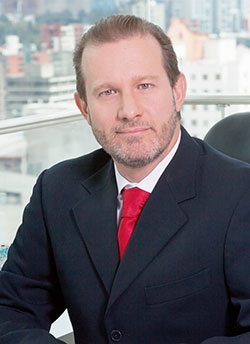 José Daniel Gómez holds a degree in Mechanical Engineering from the Simón Bolí­var University, Venezuela. He also holds an MBA from the Instituto de Estudios Superiores de Administración (IESA). José Daniel Gómez has worked at DIRECTV for 16 years, where he has held different positions including Manager of Financial Planning of Venezuela, Director of Strategic Planning of Latin America, and Operations Director in the Venezuelan market. Since 2008 he has been Executive President of DIRECTV Ecuador. Amongst his key achievements during his tenure is generating growth of 1,423% in seven years and claiming leadership of the Ecuadorian market since 2012.

Share on:
"The market has been reactivated and competition is tougher, which is entirely characteristic of a market seeing rapid growth."

What differentiates DIRECTV from other operators in Ecuador?

We are a peer television operator focused exclusively on our TV business. Other operators usually have paid TV, fixed lines, and internet components. They have three businesses they can bundle. We have one business, and therefore have to be good at technology, service, and content.

How does Ecuadorian television compare to other countries in the region?

The most notable difference between Ecuador and other countries in Latin America when we arrived in 2008 was that penetration was in the low teens; today, it is at 26 to 27%. Several markets in Latin America have penetration rates in excess of 50%, with Argentina at around 70%. Ecuador’s low penetration in itself is one of the key factors underpinning future growth potential. If you have a market with low penetration there is local cable network with limited coverage. When we entered the market national coverage and satellite service enabled us to offer our service nationwide, which enabled rapid growth. We followed this up with our prepaid service to homes, thereby delivering connection to those households who would not have afforded a postpaid TV service. We focus on content, which makes us a good option, even if not the cheapest in the market.

“The market has been reactivated and competition is tougher, which is entirely characteristic of a market seeing rapid growth.”

Does DIRECTV have plans to expand into broadband internet?

We have done so in other countries, such as Colombia, Argentina, and Venezuela. We are examining options in Ecuador, but currently there is no available spectrum. It would have to be a wireless solution because then we could provide better coverage for remoter customers. It makes sense if you are delivering content via streaming to have an alternative option for your customers.

DIRECTV has recently signed an agreement with Spanish company Atresmedia to add the Atres Series TV channel to its operations. Are you currently looking for similar agreements?

Atresmedia has been examining the possibility for distribution and content. Ultimately, we both achieved what we set out to do. We have signed similar agreements with HOLA TV, SUNDANCE channel, and with other channels interested in penetrating the Latin American market, and which required the right distribution. Partnering with DIRECTV provides an excellent regional footprint, and we have achieved the same arrangement in 2015 with the Formula 1 Channel. We are always looking for content, which ultimately is one of the few differentiators beyond service and technology and, at the end of the day, precisely what customers pay for.

Apart from content what innovations have you implemented this past year?

We have focused on delivering content beyond the home, enabling the streaming of our and our providers’ content. We have original content focused on delivering sports on our own channels. In 2015 we are also heavily focused on the DIRECTV Play App as in 2014. We have also had considerable success with the World Cup app, through which our subscribers could watch games, access statistics, and view replays. Many providers have their own platform, and ours enables us to combine, such that the customer can access all content on just one app. This is a simple way to deliver all content on computer, smartphone, or tablet. Last year, we changed the interface of our setup boxes, rendering it simpler, more user-friendly, and with all content delivered in HD.

What are DIRECTV’s prospects for the year ahead?

We need to maintain our focus on content, which can only be achieved through agreements with programmers, and again, by providing the customer with different means of watching it. We have to strengthen what we have been doing in the past, especially in streaming and out-of-home experience. We forecast double-digit growth, again despite an ever more difficult market.

What is your short-term outlook for the market?

The market has been reactivated and competition is tougher, which is entirely characteristic of a market seeing rapid growth. We are one of five satellite operators today, which means that other competitors have the same nationwide coverage. We have faced some economic difficulties, but have adapted, and our service provides a good family option for entertainment. We have adapted our offer and opened greater options for our prepaid customers, who are demanding more, such as additional receivers for their homes for a second or third television.