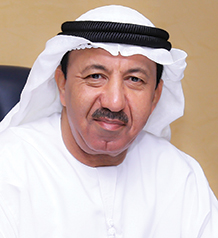 Mohammed O. Bin Majed Al Aleeli has been the Managing Director of the Department of Industry and Economy since 1984, and has made a distinctive contribution in the development of the Emirate’s infrastructure and economy. He has vast experience spanning more than 30 years in government and the private sector. He holds vital positions as a board member of the National Bank of Fujairah and Arab Company for Poultry Production. He is also a member in the Ministry of Economy’s Federal Committee for Assortment and Economical Cooperation. He holds a master’s degree in management technology from the US.

Historically, what has been the Fujairah Department of Industry and Economy’s role in the Emirate’s development?

The Emirate of Fujairah is almost 77% mountains and has a coastline along the Indian Ocean. Years ago, the department embarked on one of its major objectives to study what natural resources are in the Emirate. A British geological surveyor company was brought in to study, assess, and confirm the geological makeup of the Emirate. The geological map provided information to help identify the minerals that can be used for the manufacturing and building material industries. The geological survey report enabled us to identify two main mineral resources: gabbro, which is one of the hardest rock forms, and limestone. The local cement industry has been using this limestone since 1984, and the rock wool, building material, interlocker tiles, and ceramic industries started around the same time. The next step was to utilize our geography as a gateway to Asia and create the Port of Fujairah. Furthermore, the National Bank of Fujairah began its operations. Then we embarked on building the insurance industry, real estate, the airport, trade center, and so on. Once that infrastructure was in place, which led the way to specializations of the free zone, it attracted SMEs as well as industrialists from India, Greece, and CIS countries. Today the zone is home to a range of companies that manufacture garments or build solar panels, and we are looking further to diversify the portfolio of business and attract more high-tech industries.

What business are you looking to develop around the port?

When the Port of Fujairah started, it was for containers and later developed, especially during the Gulf and Iraq-Iran wars. The port receives a huge amount of the world’s shipping traffic, particularly seaborne oil transport, which paved the way for the emergence of bunkering business, and now we are second in the world, after Singapore. Many ships anchor in the Arabian Gulf and around the strait, which led to the ship-handling business. Providing services to the ships requires a terminal where ships can be serviced. This type of industry developed as per the shipping industry’s requirements, and today we have diversified the business with a number of terminals. Adding to it, nine terminals were started just for oil bunkering and have recently opened a very large crude carrier (VLCC) terminal for large vehicle shipping. The opening of the Habshan-Fujairah pipeline coincided with the creation of a large capacity storage tank within the port area to create another zone for storage and loading of oil, most of which is shipped to Japan, Asia, and the CIS region.

What strategies do you have for developing the SME segment?

SMEs are one of the major topics across the UAE. The SME law has already been approved, and there are many things that can be done here. One of the sectors where there is room for SME development is in clean energy, either solar or wind. We commissioned a feasibility study on wind energy and found that wind farming could produce 60MW of energy in the northwest region of Fujairah. We foresee building an R&D center for clean energy, and have entered into discussions with Spanish and German parties to create a research institute that can bring students from UAE universities to foster greater cooperation. Another option is in the free zone, which has the facility for producing solar energy sheets. This has created opportunities for companies to come and create turnkey projects for companies that require this type of energy. There is also more room for SMEs to get involved in the grain silos industry. We have an important food security program that requires enlarging our food storage capacity for products like rice. We welcome new ideas that can help put Fujairah on the world map.