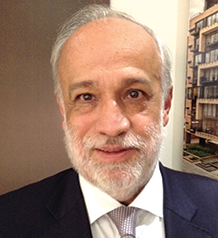 José Gabriel Cano Hernández was born in Bogotá in 1953. He graduated as a Civil Engineer from the Universidad la Javeriana, and is Partner, Founder, and President of Cano Jiménez. He holds an MBA from the University of Miami with a high specialization in management and accounting from the Universidad de los Andes. He has dedicated most of his career to directing projects on road infrastructure, planning, and the design of related concessionary projects, as well as aqueduct and sewage systems. He is also passionate about the development of residential projects that contribute to the local environment and communities.

Share on:
TBY talks to José Gabriel Cano Hernández, President of Cano Jiménez, on the makeup of the company and its activities in infrastructure and construction.

What market conditions led to the creation of each group?

Cano Jiménez is a family-owned group of companies. The company was founded in 1983, and was initially focused on road infrastructure, consulting, and transportation, as well as the construction of housing projects. As we developed and grew within the sector, we moved into other lines of business directed toward creating groups that promote road infrastructure concessions. At the time we deemed it necessary to partition the companies to promote specialization in specific areas. It also separated and mitigated the risks in each sector. Consultancy, design, and construction supervision have certain associated risks. Construction has different risks and real estate, of course, has different visions. As we defined the different lines of business, we realized that they needed to be under the direction of a corporate group that provides services to the three companies. So nowadays, we are operating with a completely independent operational structure in each line of business, but behind which is a corporate group that leads the general strategy and provides all three companies with services such as human resources, accounting, financial, commercial promotion, and legal support. The three companies today are Cano Jimenez Estudios, which handles consultancy, Oceisa, which is in charge of infrastructure, and Promobily in real estate.

What are the key infrastructural and development projects you are working on today?

Cano Jimenez Estudios has participated in a number of large concessions. Today, the greatest achievement is the design of the first metro line for Bogotá. Regarding infrastructure, the use of trenchless technology is a major step. With Oceisa we finished a storm drainage system project a couple years ago in the Fontibon, an area of Bogotá close to the El Dorado airport, which was prone to flooding every winter due to a lack of drainage. In this densely populated area, we installed 68km of piping without disturbing the roads, with the trenchless method. We carried out a reinforcement of the main water pipe for Bogotá and Tibitoc with interior limestone and metallic tubes. Our project in Fontibon was the largest for Oceisa, alongside the reinforcement of the main water pipe for Bogotá. For Promobily, the biggest projects are in Cedritos, namely Botanika Aqua and Botanika Telus, where we are building 341 apartments. Another Botanika building will have 46 apartments, and we are planning to commence sales and production shortly.

What has been your role in the Bogotá metro advanced engineering process, and what is your perspective regarding the development of the project?

Our participation in the consortium that developed the Bogotá Metro, which included two Spanish companies, IDOM and Euroestudios, was granted due to overall experience. Euroestudios is a general engineering company and IDOM is an entity with a long history of working with train and subway technological systems, while we are a general Colombian engineering company with experience in local systems, such as the research of public utilities and traffic management. Our input in the consortium, which corresponded to one-third of the project, was mainly field research and local support. The other two companies contributed with their specialized technology for railways, regarding security, evacuation, and so forth. Even though that was our main obligation and contribution, we participated in the whole design process and the transfer of technology. It was paramount for the Colombian engineers involved in the project to learn from it and make it our own. In summary, we participated in all activities related to the project, even though we didn’t manage them directly.