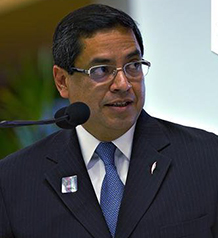 One Destination to another

Rodrigo Vásquez has been involved in the design, implementation, and operation of several regional, national, and charter low-cost airline business models in Mexico. He is currently CEO of TAR Aerolí­neas, and previous positions have included CEO of MEXODOS, GM of Riviera Maya Soy Tours, and Commercial Director of TAESA.

Share on:
TBY talks to Rodrigo Vásquez, CEO of TAR Aerolí­neas, on the firm's entrance to the market and potential for growth.

Over the past seven years, no licenses had been issued in Mexico for new airline carriers. What has allowed TAR to end this spell?

TAR’s concept is to develop an aviation niche that at present is not reached by the legacy carriers in the country, and what we are trying to do is open new routes to the consumer, making it possible for the various regions of the country to connect without the need to go through the nation’s main aviation hubs. People living on the Gulf Coast, for example, can travel with TAR from one destination to another without transiting through Mexico City. When we presented the concept to the Ministry of Communications, we received massive support from the central government, and of course, from local governments. We have chosen to fly 50-seater jets produced for low-density routes that make them viable for the creation of a route structure and an operational structure in which we can develop business and hence opportunities that have been dormant for years. We now also have the conditions as certain major companies in Mexico are substituting such aircraft with high-density alternatives. We are currently the only company with the capability to really operate in this segment.

TAR’s head office is in Queretaro. Why did you select this city?

Queretaro is well placed geographically at the center of the country, has a strong aeronautical industry, and its airport itself has considerable international operational capabilities. Queretaro is a regional capital, and is well connected by land, and ideally located for setting up operations. We also believe that when the new high-speed train is built more companies will be established around the city.

Could you tell us more about your plans for expansion in the Caribbean?

We are trying to establish a circuit whereby we can bring people, not only from the Mexican region of Riviera Maya, but also from Cuba, Santo Domingo, and Jamaica, to the Mexican coastal region, and that is also of major potential. The Yucatán Peninsula accounts for the majority of tourist arrivals to Mexico, but its connectivity with other Caribbean countries has still to be improved.

TAR has been operating in Mexico for a short time period but has experienced rapid growth. What is the secret behind TAR’s success?

In Mexico we have a rare situation in which supply creates demand. Demand is there, but we are missing the products and so when we open new routes, demand rapidly follows. The key concept is that we should keep developing aviation products for existing demand, and fortunately for us, we have huge potential. Right now we have reached 13 destinations that make up over 40 routes, and the idea is that we should receive three additional aircraft by March, and thereby double the number of destinations. We are talking to the various airport groups in the country and each has a different marketing scenario, and also the ambition to connect the various airports. In addition, we are receiving support from local governments and in exchange can provide a good product to the consumer, with reasonable fares. We charge approximately $100 for an average one-way trip. In the past, our passengers would pay at least double that before flying with TAR, and so we bring an important element to the community by lowering their transportation costs.

Why did Grupo Mafra invest in TAR?

Grupo Mafra decided to invest in aviation once we had convinced them of the great opportunities to be exploited in this industry. We made a complete analysis of cargo, scheduled, and charter aviation, and also air taxi operations. They realized that regional aviation was the element that needed to be developed. Grupo Mafra is a local group of Queretaro and really believes that what Mexico needs is to develop opportunities in the interior of the country.