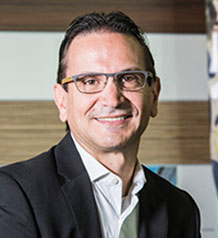 Before becoming the CEO of Bancolombia in 2016, Juan Carlos Mora Uribe held the position of vice president of innovation and digital transformation. He has been in the Bancolombia group for over 25 years and holds an MBA from Babson College.

Share on:
"Technology is making other changes possible, but people are also simply changing their behavior and their relationship with financial institutions."

What is Bancolombia’s strategy for implementing advanced technology in the Colombian market?

My previous position with Bancolombia was as Head of Innovation. So I am aware of what is going on in terms of innovation and what is happening in the financial sector around the world. The financial sector is changing rapidly, but not just because of technology. Technology is making other changes possible, but people are also simply changing their behavior and their relationship with financial institutions. In the case of Bancolombia, we have been working on different ways of seeing our business since we started a new way of doing things in 2013, and we are convinced that this transformation to a digital model has to be aggressive. At the center of our strategy is customer experience and how we provide our customers with an experience where they really see how a financial institution can provide them with the products and services they need. Digital innovation and customer experience are central to the innovation strategy of Bancolombia.

Do you have any innovations in the pipeline for 2017?

We have several projects, one of which is our digital bank, which we have been working on for the past 18 months and for which a beta version is already on the market. What we are learning here is that it is really a new way of doing business. It is separate technology from the bank and a separate business model. Therefore, we see it as a laboratory in which we test concepts before going to the market and incorporating what we have learned in the process. It is a separate bank and is called “Nequi by Bancolombia.” We are experimenting with the concept of a bank that is all digital and mobile with no branches is a new concept we are introducing, and we are learning a lot from our customers, which we will use to improve our services.

We do more than live this concept—it is the foundation of how we conceive of banking: innovation and customer service that are based on people’s experiences. This means the responsible design and sale of products that people actually need, as these are also the hallmarks of any sustainable institution. Yesterday Colombia’s reputation ranking results were released by an organization called Merco, and Bancolombia was first on the list of 100 firms from every sector to be ranked. This means that our way of doing business is not just a slogan but our guide for doing business. We are a social actor in the economy, and we incorporate this into our business strategy each and every day. We are very proud because nowhere in the world is it easy or common for a bank to become the most reputable business in a country.

What effect will the tax reform bill have upon the banking sector?

The tax reform project is now public, and its central elements, from what we know so far, are good. In general, the reform is intended to promote investment and reduce the tax burden on corporations, which is good. In Colombia, it is not just the rates but the complexity of the tax code that hinders investment. In that sense, I think that what the Finance Minister presented to congress is good. It would increase the VAT, a positive step—but the question remains what Congress will do about it. We do not have much time to discuss the reform as it needs to be approved by the end of the year, but Colombia needs it for two reasons, because of fiscal considerations and investment promotion. It also presents some structural changes that would be beneficial for the Colombian economy.

How would an accepted peace deal affect the finance sector?

First of all, the result of the referendum was a surprise in general. With that in mind, the conversations that are taking place right now will end in a way that will be good for Colombia. The question is what is going to be agreed upon and when it’s going to be signed. The sooner that happens the better. Because of the conflict, many regions in Colombia have not been a part of the economic development that the country has had over the past 15 or more years. Peace in Colombia will allow economic actors to enter previously untouched markets, many of which the government has also been absent from. For financial institutions like us with a large presence, we will have tons of new opportunities to enter completely new areas and sectors, especially when it comes to financing areas such as agriculture. This is going to be a huge opportunity for the country and will drive the country’s economic development in the medium term. We are preparing to enter these areas and are looking for opportunities in rural sectors.

What are your strategies for expanding the bank’s international presence?

We have a presence in three other major markets in Latin America after Colombia, namely Panama, El Salvador, and Guatemala. We are not planning any additional acquisitions, but do want to consolidate these operations. Our operations in Colombia are big and continue to grow as we bring new products and services into the market. We are also bringing our experience, products, and business ethic in Colombia to our markets in Panama, El Salvador, and Guatemala. There are opportunities in each of these markets for us to grown and change the way banking is being done in those markets.

What are your expectations for the bank and the Colombian economy in 2017?

We see 2017 as a year of transition. Growth forecasts are slightly higher than for 2016, though they will still be below our potential growth rate. As such, it will also bring opportunities for us banks and the economy in general. Infrastructure will also start to play a bigger role in 2017, as will exports. We are positive about 2017, but it is not going to be a year for big growth in Colombia. It is going to be a transition into 2018—then we will see bigger growth. We are very positive in general, and see that the Colombian economy continues to offer big opportunities to do business—and we are ready to take them.