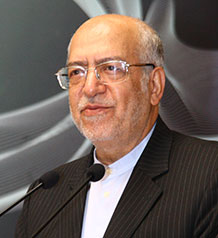 Minister of Industry, Mine and Trade, Iran

Mohammad Reza Nematzadeh, born 1945 in Tabriz, is an Iranian politician and engineer and the incumbent Minister of Industry, Mine and Trade of since he was approved by the Iranian parliament on August 15, 2013. Previous positions include Senior Consultant to the Oil Minister, Deputy Oil Minister and President of the National Iranian Oil Refining & Distribution Company, and Minister of Labour.

Share on:
"We are looking at the domestic and the export market."

What factors have contributed to the development of Iran’s industrial, mining, and trade industries?

Unfortunately, we had some negative growth for two consecutive years before last year so I think to go from negative growth to positive growth is not so difficult. First of all, after the election of Dr. Rouhani, people gained a new mood for working and investment. They became really optimistic about the future. This is a main reason people started to go for business, production, marketing, and so on. They had lost their hopes in the previous years because the economy and industry were going down. They then became optimistic about the new government. They really came into action. Secondly, I remember the first month our new government started about two years ago; we developed some points about the removal of the hindrance to production in the economy. We took it to the government and it approved about 35 articles in order to pave the way for new investment, new actions, and so on. Afterwards, we again developed another group of points, which it needed parliament approval for. There were points about the banking system, taxation, how to increase the capacity of the banks, as well as how to help people who owed money to the banks. We got some permissions from parliament. We took about 30 articles to parliament, but they added 30 more when they were approving discussions, so it came to 60 articles. Really, our effort was to remove all the obstacles so the economy and industry could grow. I think these were the main reasons. And this was done at the same time the sanctions were there. We couldn’t get any help from outside; no banking relations, no long-term transactions, and most of the companies were afraid to work with us. In spite of this, even our non-oil exports increased about 19% last year.

What opportunities and partnerships are you looking to create in order to develop the industrial sector?

In what ways is the Ministry trying to promote economic ties with the EU?

We think each of these countries has some specialties. They have good or competitive conditions in certain areas. For example, Italy or Germany, these are industrial countries. We think Germany has five or six areas for cooperation. We have information and history that shows there are certain countries with certain areas that are more cooperative. We look forward to finding out the companies on their side that are qualified and then try to match them with ours. The government is not going to do business; we have to make general policies so they can work together. If you want to expand the business, banking relations are a priority. This is why they are bringing their bankers here to talk with our banks about cooperating again. For investment, you need export credit agencies to support the investors. They have to find out how to restart their cooperation. We have only started in the last two months. We have said that, if they want to restart, as a basic criteria, they have to start with banking. We have to exchange information. We have to see how to match their companies with our companies. I think it’s going to take some time to build this. I expect real cooperation to start by the beginning of 2016. By that time, then we are talking about joint contracts and so on with some eligible companies. It takes some time for negotiations.

Iran recently announced plans to cooperate with China to contract an industrial park for petrochemicals, aluminum, and steel. How has this project progressed? Will this project help trade relations with other Asian countries?

Yes. Sometimes European people think that Iran’s relationship with Asian countries will hurt its relationship with European countries. But, you see, Iran is big enough to have cooperation with all of these companies. We are not going to lose all relations with the big industrial, growing countries like China or Russia. They have some advantages that we need to utilize. For example, in infrastructure, there is so much capacity in China. Big projects, big activities, and their processes are competitive, so why not cooperate? We are just continuing our previous cooperation as well as starting new cooperation. This government is looking for a good, long-lasting relationship with all the countries and it will not happen unless we can make it win-win for all sides.

What is your outlook on the mining sector?

Last year we invested about $3 billion in steel complexes. It was a sanction and we did not have so many financing options, but we still did it in one year. By 2025, we are looking to reach a minimum of 50 million tons of steel. Some of the projects are already under construction. Some will happen in the coming years. We have domestic growth and it’s an area where we can supply steel to our neighboring countries. Out of this 50 million tons, we think a minimum of 10 million tons will be more exports. This year we will produce a minimum 18 million tons of steel, but there are many different stages.