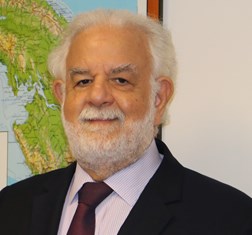 Victor Carlos Urrutia has vast experience in the energy sector, having served as an independent consultant, completing numerous market and feasibility studies over his career. He graduated from Purdue University in Indiana, US, and holds a doctorate and master’s degree in physics from the same university. He has also taught electrical engineering, communications, and physics at the University of Panama. He has served as administrator of the Autoridad Nacional de los Servicios Públicos ASEP, allocating concessions and licenses for electricity generation and the reintroduction of tendering rounds for assigning resources. He is a member of the Panamanian Society of Engineers and Architects and the Institute of Electrical and Electronics Engineers (IEEE).

I am extremely satisfied with the progress of our plans and the important role we have played in defining the country’s energy policy. Several years ago, we issued the National Energy Plan 2015-2050. We reviewed that plan in 2017 and held meetings with civil society groups and the broad participation of the entire country to review and update it. The development plans are guides; they are not fixed. The most important result is the emphasis on energy efficiency, and to that effect the secretariat has made significant efforts and has had much success in creating standards of efficiency and a technical regulation for equipment entering the country. Not only were technical regulations published last year; minimum indexes of consumption will come into force during a trial period. This allows providers to adapt to these new conditions.

The main highlight is the approach of energy efficiency. We talk about coverage and the participation of renewable energy, though one of the things we had to control was demand. We want demand to grow in a more reasonable way and are making progress there. We have also advanced in construction regulations. A plan was drafted; now we are working on the implementation. It will come into force in the short term, likely in 2018. This will reduce energy consumption on the baseline in new constructions by 15%, which will result in a better use of energy. We have managed to create opportunities for the private sector in investments. This is going well, though the state must intervene in efficiency, for example. The regulation for energy transportation was drafted with the help of engineers and the Green Building Council. On the other hand, energy coverage is going fairly well. When we started, we had tenders to overcome the deficit in previous years, which is no longer the case. We also held some tenders for long-term investments. As a result, there are several projects based on natural gas.

What can you share with us about the ETESA project?

The ETESA project is finished, and the network is more optimal. There are still some limitations of the system of transport. Because of our geography, most hydroelectric generation projects are in the west of the country and far away. We have other projects in addition to the third line, such as the fourth line. It will be a higher voltage line compared to the previous ones. It is a 500kW line and will have a larger capacity than previous ones. The system will be more robust and allow for easier maintenance. The electrical systems tend to be delicate; when there is a shortage, the system collapses. The third line was built between 2014 and 2017, and we are fairly pleased with the advances in energy efficiency. We will also start a hiring process that will give more participation to renewable energies. In the long run, the entry of natural gas into the system will result in greater flexibility and reliability in operations. In renewables there is an intermittency problem. International interconnections are also extremely important, like the one with Central America, which people have been working on for a few years, though the market has yet to be perfected. We are working to implement an interconnection project with Colombia that would also allow a connection to the rest of South America.

What is the strategy of the secretariat when cooperating with other ministries?