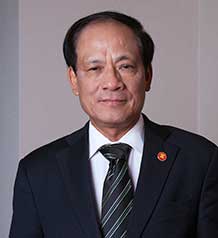 HE Le Luong Minh is a native of Thanh Hoa, Vietnam. Before assuming his post as ASEAN Secretary-General, he was Vietnam’s Deputy Minister for Foreign Affairs. He was nominated by the Government of Vietnam, and the ASEAN leaders endorsed him as Secretary-General for 2013-17. From 2004 to 2011, Minh was Vietnam’s Ambassador Extraordinary and Plenipotentiary, Permanent Representative to the United Nations. From 2007 to 2008, he was concurrently Assistant Minister for Foreign Affairs and from 2008 till the end of his tenure in 2011 concurrently Deputy Minister for Foreign Affairs. He studied Diplomacy at the University of Foreign Affairs (now the Diplomatic Academy of Vietnam), Hanoi, Vietnam, and received his degree in 1974. He then studied Linguistics and English Literature at Jawaharlal Nehru University, New Delhi, India.

Share on:
"Malaysia assumed its chairmanship of ASEAN at a challenging phase of the ASEAN's community-building and integration process."

Malaysia is chairing ASEAN for 2015. What are Malaysia’s unique qualities that have made it a strong chairman and allowed it to develop ASEAN?

Malaysia assumed its chairmanship of ASEAN at a challenging phase of the ASEAN’s community-building and integration process. This year marks the end of the period for implementation of the 2009-2015 action plans contained in the three blueprints for the political-security, economic, and socio-culture communities. In the remaining months of 2015, ASEAN has been accelerating efforts to realize the ASEAN Community and at the same time crafting its post-2015 vision. This year indeed has been instrumental in deciding the success of the ASEAN Community building process and in charting the future direction of the ASEAN Community. As ASEAN Chair at this critical juncture, Malaysia with its vast experience and the strong support and dedication of its leadership has contributed to the enhancement of ASEAN unity and solidarity helping ASEAN maintain its centrality through the implementation of important initiatives such as those addressing the issues or the irregular movement of people, radicalization and violent extremism, the territorial disputes in the South China Sea, the development of SMEs, the strengthening of ASEAN institutions and the promotion of ASEAN as a people-oriented and people-centered community. Malaysia’s successful chairmanship of ASEAN this year is laying a solid foundation for ASEAN’s further progress in the process of community consolidation and comprehensive integration beyond 2015.

How would you summarize the trade benefits that this economic bloc has to offer its AMS?

The AEC will increase the opportunities for ASEAN Member States in the form of an increasingly well-regulated, dynamic, and creative platform for trade and commerce. The community is comprised of some of the world’s most dynamic economies, and amid the diversity, lies complementary strengths and potential. As a region, ASEAN has become more influential, with widening markets regionally and globally. It is Asia’s third largest economy and the world’s seventh largest. With a combined population of 625 million, ASEAN has a vast consumer base, behind only China and India. ASEAN is also among the most advanced integrated markets with intra-ASEAN trade comprising the largest share of its total trade that amounted to $2.53 trillion in 2014. One of AEC’s pillars is the establishment of a single market and production base. Toward this end, significant progress on tariff liberalization has been made across the region with intra-ASEAN import tariffs virtually eliminated and formal restrictions in services sector gradually removed providing ASEAN Member States with greater market opening and economies of scales in trading and doing business within the region. Member States will also benefit from improved efficiency from lower transaction costs and better business certainty with simplifications of cross-border trading processes, including customs procedures and rules of origin, harmonization of technical regulations and mutual recognition arrangements. The AEC has also led to the creation of a business-friendly and innovation-supporting regional environment through the adoption of common frameworks, standards and mutual cooperation across various areas such as agriculture and financial services, competition policy, intellectual property rights, and consumer protection. It also supports improvements in transport connectivity and other infrastructure networks that have facilitated cross-border transportation and contributed to reducing overall costs of doing business, while providing ASEAN’s people and businesses with better opportunities to work together in a more productive manner. Finally, the coherent approach pursued by ASEAN in its external economic relations in an effort to fully integrate to the global economy will provide ASEAN member states with opportunities to expand their reach in the markets to strategic partner countries, and enhance their participation in global supply networks.