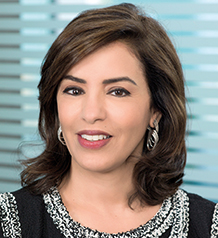 Maha K. Al-Ghunaim co-founded Global in 1998 and has been managing the company since then. She has over 31 years of experience in the financial sector, mainly in asset management and investment banking. She has served on the board of several regional companies and advisory boards and has held several senior positions. She received several accolades from industry leaders including the “Banker Middle East Industry Award“ (BME) for her outstanding contribution to the finance industry. The Wall Street Journal named her on its list of 50 “Women to Watch,“ and Forbes ranked her for three consecutive years as one of the World’s 100 Most Influential Women. She holds a BSc in Mathematics from San Francisco State University.

Share on:
What have been some of the defining events in the evolution of Global since it was established in 1998? It’s been somewhat of a rollercoaster ride for us. When we […]

What have been some of the defining events in the evolution of Global since it was established in 1998?

It’s been somewhat of a rollercoaster ride for us. When we were established in 1998, when oil was at around $8. We shot up like a rocket during the first 10 years of our inception. We understood that the capital markets in Kuwait lacked certain products and services and we capitalized on that. We entered a boom market phase between 2002 and 2007, which gave us the headwind we needed to grow. We started Global with a capital of $50 million in 1998 and, by mid 2008, we were trading at a $5 billion market cap. We expanded our offices to cover Kuwait, Saudi Arabia, Jordan, Egypt, Oman, and even had investments in Palestine. The financial crisis was the first real challenge for us and, as we witnessed, when the US sneezes, the whole world catches a cold. Asset liability management became a major challenge as well. We were only 1-to-1 leveraged at the time, but in less than 12 months we were leveraged at more than 12-to-1. We chose to be completely transparent with our clients, shareholders, and regulators throughout it all. This approach was unique in a culture that generally conceals problems, but we stuck to our commitment to being honest. I’m proud of what Global has done. With the restructuring agreement we signed in 2012, the company is now well capitalized, totally debt-free, and profitable. Dividends are being distributed and business is growing.

As a leading Kuwait-based investment company, what role do you see Global playing in terms of improving the business environment and contributing to the local society in Kuwait?

Our corporate social responsibility strategy focuses on two major segments; women and young people. Kuwait has always been a pioneer in supporting women and we at Global have a lot of women in senior positions. We have held a lot of seminars on women in investment, training, and promotion of women’s empowerment. In complement to the national vision of Kuwait, we also feel strongly about the need to support the emergence of entrepreneurs and small businesses. We feel the frustration of young people in trying to fulfill their dreams. There is a lot we need to think about to support small enterprises. We are hoping that we can work with the Kuwait National Fund for SMEs Development, the $2 billion fund that has been created by the government to support young people.

Kuwait is well known for its investment outflows, but in terms of attracting investors to Kuwait, what opportunities exist here and how can Kuwait create a more attractive environment for foreign investment?

There are a lot of things we can do, especially with the recent reforms mentioned earlier. The retail market promises a lot of growth potential considering the demographics on the consumer-side, the strong inflow of expats, and the growing entrepreneurial spirit among SMEs in Kuwait contributing to the consumer goods and retail market in the country. There’s a lot of potential in the healthcare and educational sectors, as well. These sectors still hold a lot of value for investors in Kuwait. Then of course everything related to oil and gas, petrochemicals, and alternative energy.

Everything we talk about economically for 2016 hinges on what happens geopolitically, unfortunately. The developments with Iran may lead to further uncertainty in the region and markets don’t expect a rise in oil prices to hit the $70-100 range, but will be somewhere between $30-50 a barrel. I hope GCC governments tackle the challenge that a reduction in oil prices will continue to have on their budget surpluses, and moving towards a budget deficit, which could be a potential for the GCC government and corporate debt market in meeting the fiscal spending and the development plans that the government continues to commit to in the coming few years. Over and above that, we will continue to offer ideas in defensive sectors such as health and education, among others.