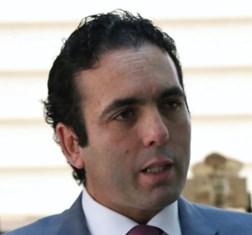 Pablo Campana Sáenz had an extensive career in the private sector before his appointment as Minister of Production, Foreign Trade & Investment of Ecuador in May 2017. Following a cabinet reorganization in mid-2018, he is now also responsible for the former ministries of industry and aquaculture & fisheries. He held various positions with the Nobis consortium and was CEO of Pronobis, the real estate development division. He also represented the company as executive president in New York and Miami. Prior to Nobis, served in executive roles at the Ecuadorian Bottling Company and Valdez Sugar. Campana graduated with a degree in international business and marketing from Universidad del Pací­fico and obtained his MBA from IDE Business School. Prior to his business career, he was a professional tennis player, representing Ecuador at the 1996 Olympics in Atlanta.

Share on:
TBY talks to Pablo Campana Sáenz, Minister of Production, Foreign Trade & Investment of Ecuador, on new legislation, merging ministries, and ambitions for his mandate.

On August 21, a new law to improve productivity, attract investments, boost employment, and bring fiscal stability was approved by the Assembly. What are your objectives and expectations of this new legislation?

The main objective of our administration and this new legislation is to enhance the dialog between the public and private sectors. In the previous administration, there was a big distance between the public and private sectors, as well as between the Ecuadorian government and our strategic partners such as the Pacific Alliance, the US, South Korea, and Japan. We are refreshing the image of Ecuador and strengthening Ecuador’s relationship with other countries, at the same time strengthening relations between the public and private sectors at home. The new law provides a solid legal framework with international arbitration, in addition to tax incentives, ranging from eight up to 20 years of zero income tax in certain sectors and provinces. This has eliminated certain earlier obstacles for investment while opening new doors. For example, we eliminated the outflow tax for new investments and the windfall tax for the mining sector and are offering participation contracts for hydrocarbons instead of service contracts, which will open our economy and entice large oil companies around the world to invest here. Furthermore, we reduced the tax for the transfer of shares from 25 or 35% to maximum 10%, which has made us extremely competitive in the region. In addition, we changed the regulations with regard to countries considered tax havens; they are now welcome to invest as well. We eliminated the legal responsibility that used to fall on the shareholder or management of a company. These measures lead to more transparency, and if there is a problem with the administration of a company, the responsibility falls on the company and not on the last beneficiary of that company. This transparency, in combination with adequate international arbitration, is the new foundation of our investment climate. This new legislation provides a powerful new toolset that will do the country well, and it has already received great feedback from international companies and funds. During a recent visit to New York, I met with 24 financial funds that are now seriously considering Ecuador as an investment destination. These processes take time; however, at least the government has done its homework. It is now well understood that we are fighting corruption and working on transparency in our fiscal accounts. In 2018 alone, we had three major rounds of signing investment contracts, with 137 private companies committing a total of USD10.3 billion of investments, out of which 84 companies are already fully operational in the country. Finally, Ecuador is the only country in South America with the US dollar as its currency, which means that inflation and devaluation are limited.

In 2018, you also assumed responsibility over the Ministry of Industry and the Ministry of Aquaculture and Fisheries. How do you envision integrating these entities with your ministry?

The President decided to review the size of the public sector in a bid to better align responsibilities. From 40 ministers, we are now down to 20, significantly reducing the size of the government, which encourages us to become more efficient and lean. That includes transferring tasks to the private sector and encouraging more private investment in general. Still, the success of every executive, minister, or CEO depends on the team, which is our main focus right now. Bringing together the ministries of industry and foreign trade presents us with a unique opportunity to better align our public policies. Merging the two entities will better support our local industries to start exporting and build a broader export portfolio, which in turn should bring a more favorable trade balance. For the productive sector, we need to improve competitiveness, which means we will better assess the strength of our provinces and establish PPP models to encourage investment, rather than developing with public funds. Our mission is to create a state policy for production. Our neighboring countries Chile and Peru have managed to do so and increase their GDP growth as a result. We look forward to the same stability with private rather than public investments. In the next six months, we will present a new package of productive policies and laws to the President and the assembly. The merger of these ministries is at the foundation of the work that we have done here. Incorporating the ministry of aquaculture and fisheries means we can include that industry in our production matrix as well, while supporting it by opening new export markets.

One of our objectives when we started the new administration was to visit 20 countries in the first year. Thus far, we have visited 29 cities, including two trips to the UAE. We have excellent bilateral relations, and they are resulting in large-scale investment projects. For the Posorja project, USD1.2 billion has been committed, and construction is on track. The ministry is a firm believer that infrastructure, ports, airports, railways, and roads are one of the key enablers of economic growth, and we invite international investors to participate in these projects. Following a recent meeting with UAE’s Minister of Economy and the CEO of ADNOC, we now anticipate another large-scale investment from their side. They are keen to invest in our Manabi Refinery, which currently has a refining capacity of 300,000bpd, though it has not been fully utilized in the past seven years. In 2017, we changed the concession model to invite more private investment, and the project will go for a public tender shortly. Apart from the UAE, we have received a visit from the Emir of Qatar, who expressed an interest in some of our investment projects. Our other main partners for our large public tenders are consortiums from Russia, China, South Korea, Italy, the UK, India, and the US.

With the merging of the ministries of industry and foreign trade, how do you envision encouraging the local industries to start exporting?

I am a strong believer that all our companies are able to export. As a dollarized economy, it is instrumental that we increase our exports and our FDI. Our national beer brewery Cerveceria Nacional (CN) recently shipped its first container to Spain, while the number-two producer, Biela, is about to do the same with other countries. Another project with CN that we support is the development of local barley fields, for which we encouraged it to invest in Bolí­var province. This is a small province, and the investment will serve as an excellent example of import substitution and local job creation.

What would you like to achieve in the coming years of your term?

The finalization of the FTA with the US and becoming an associate member of the Pacific Alliance are currently high priorities on our agenda. On top of this, we are working closely with the UK on a post-Brexit trade agreement. In terms of industrial development, we seek to build an aluminum smelting plant, a copper refinery and an oil refinery. Creating more employment in the private sector is another key objective. Current unemployment stands at 4%, which is relatively low, though there is an underemployment of 40-45%, which is something we are concerned with. In the long-term, I envision Ecuador becoming a financial center for South America. For nearly two decades, we have had the US dollar as our currency and have not fully capitalized on that. If we can provide the legal stability and framework and the confidence, then we should be able to become a financial center in the medium to long term—just as Panama, Uruguay, Singapore, and Hong Kong did for their respective regions. When we achieve that, we will be able to significantly increase our deposits. Currently, we receive around 36% of our GDP from these deposits, while the financial centers above receive up to 96%. With such figures, we would no longer have to worry about our balance of payment. The country has many of opportunities: hydrocarbons, mining, agriculture, fisheries, beautiful regions for tourism, excellent road infrastructure, 90% of renewable energy, a dollarized economy, peace and stability, great weather conditions and access to fresh water everywhere. Only legal stability and economic flexibility were missing and that is what we are currently working on. 38% of our exports consist of oil, and as the crude oil price increases, we have a positive capital flow. The national debt is only 56% of our GDP, which is manageable, especially given the size of our country. Starting from 2020, I believe we will achieve a stable 5% GDP growth per year.