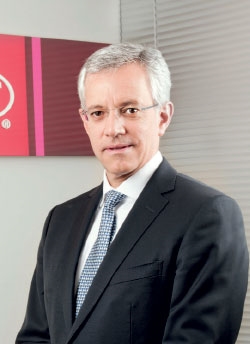 Patent is a Virtue

Luis Rebollar González is President of DuPont México, Central America & Caribbean as well as Vice-President of DuPont Titanium Technologies, Latin America. He began his career at DuPont in the Crop Protection business unit at the Tlalnepantla, Mexico site, as Shift Supervisor, working his way up the chain. He graduated from Universidad Iberoamericana with a degree in Chemical Engineering and holds a Master’s in Business Administration.

Share on:
Can you give an overview of DuPont’s presence in Mexico? The world population reached 7 billion in 2012, and could reach 9 billion by 2050. That is an extra 2 […]

Can you give an overview of DuPont’s presence in Mexico?

The world population reached 7 billion in 2012, and could reach 9 billion by 2050. That is an extra 2 billion people that will require food and services in a number of areas. I try to put these numbers in terms of the Mexican population, and have worked out that the population of our country is growing by about 2 million per year, which places increased demands on infrastructure and supplies. The capabilities and skill set we have as a company allows us to be well placed to become an important player in serving a growing society’s needs. The area of energy, of course, will become increasingly important, and the government is trying to pass reforms aimed at boosting the potential of the energy sector that will address both today’s and future energy needs of our country. We see ourselves as a science company that drives innovation through strong collaboration with customers and stakeholders along the value chains where we participate, with a particular focus on food, nutrition, energy, and protection.

Which business units have the most potential for growth?

Several of them. We have an engineering polymers division that is very closely linked with the automotive industry. I expect a lot of growth in this division because of all the investments that have been announced here for the automotive industry. In the next four years, production capacity in Mexico will grow from the current 2.5 million vehicles to 3.5 million annually. DuPont Mexico has been in operation since 1925. Our competition is very strong, but we have a lot of experience and also have great people so I am confident that we will continue to succeed. We have another division that we refer to as Packaging & Industrial Polymers, which is for developing new and creative packaging films to preserve the shelf life of products and to improve the printing techniques that enhance the value and power of brands before consumers. We also have a pigments division, where we produce titanium dioxide; we have a very large manufacturing site in Altamira, in the State of Tamaulipas. We are making a very significant investment of $580 million in this site to more than double the current capacity—this is a project that we hope will be complete by the end of 2015. We have five such plants in DuPont; three in the US, one in Taiwan, and one in Mexico. We decided to invest in Mexico because the productivity and competitiveness of that facility is second to none. DuPont is the largest producer of titanium dioxide in the world, and it manufactures it using a technology that we invented and patented back in the 1950s, which gives us a technological advantage. Mexico has a strong industrial base; its exports to the rest of the world are greater than the exports of all Latin American countries combined. Mexico exports $1 billion a day worth of products to the US on average, while, in comparison, Germany exports around $300 million.

What successes has your innovation center recorded?

The DuPont Mexico Innovation Center is a concept that came together about three years ago. Offering global access to our best scientists and engineers around the world has proven to be something customers value very greatly and have has allowed us to improve the speed at which we find and develop solutions. The Mexico Innovation Center was the first one in Latin America and our fifth in the world. It has been a major success, with 245 meetings with customers in our first year. We had a total of 1,100 customers visiting during the first year of operations, with a total of 53 projects identified for development. In its first year of operations, $25 million was generated for DuPont from these projects, and it is just as dynamic in the second year.