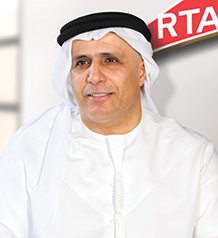 Director General and Chairman of the Board of Executive Directors, Roads & Transport Authority (RTA)

HE Mattar Mohamed Al Tayer is the Director General and Chairman of the Board of Executive Directors at the RTA. He has led the institution since its establishment in 2005. Before taking the helm at RTA, he worked at the Dubai Municipality, assuming several positions up to Deputy Director General. He is a professional Civil Engineer and holds an Honorary Fellowship of the British Institute of Civil Engineers (ICE). He is an active participant in a host of councils and committees in Dubai, including as a Member of the Executive Council of the Dubai Government, Vice-Chairman of the Dubai Sports Council, and Member of the Expo 2020 Preparatory Committee.

Share on:
TBY talks to HE Mattar Mohamed Al Tayer, Director General and Chairman of the Board of Executive Directors of the Roads and Transport Authority, Dubai, on recent developments, the PPP model, and the use of technology in transport development.

How would you sum up the successes of RTA in the past year?

We had a number of successes last year, such as the inauguration of Dubai Tram on November 11th, which was rolled out on schedule. I am proud to say that public transport use topped 502 million passengers in 2014, with a 12.6% increase compared with 446 million in 2013. The public transport network in Dubai has become essential for serving the mobility and access needs of people across the Emirate. Our roads and transportation system underpins the framework of the city and supports the growth and development of Dubai. In supporting and contributing to the vision of HH Sheikh Mohammed Bin Rashid Al Maktoum, Vice-President and Prime Minister of the UAE and Ruler of Dubai, to transform Dubai into a smart city, RTA has developed a smart city program and launched several mobile applications with all its 173 public services being available on smartphones. RTA is focused on sustainability as part of its contribution to supporting Dubai’s transformation into a sustainable city. During 2014 RTA has carried out 32 energy conservation initiatives and eight green economy support initiatives. These initiatives are expected to achieve savings of about $4.63 million and to cover various RTA sectors and agencies. Other projects include the commencement of the Integrated Transportation Information Center (ITIC), which is a central management hub for the enormous volume of data available through the different RTA transportation systems. RTA has also commenced work on the Enterprise Command Control Center project, known as EC3, which will monitor, coordinate, and manage all transportation systems in Dubai in coordination with the emergency services.

How important is the PPP model to the success of RTA?

With Dubai’s Smart City initiative high on the government’s agenda, how does RTA utilize technology and Smart Services to increase its capacity?

RTA already is a major user and developer of new technologies. It is committed to investing in new, smart technology as part of its contribution to making Dubai the world’s smartest city. Technologies such as the cloud, the Internet of Everything, data analytics, social networking, mobile, and other systems are being developed to this end. The RTA launched several smart applications in 2014, including the Smart Parking, Smart Drive, Smart Salik, Wojhati, the Smart Taxi, Drivers and Licensing, Public Transport, and the Corporate Services apps, with a total of 173 smart services launched as part of these programs. These applications allow customers to access RTA services from anywhere at any time, and to deliver a superior user experience.

How important do you think additional investment in the transport sector is to Dubai’s aspirations of being a leading international transport and logistics hub?

In general, highly connected transport networks contribute significantly to increased levels of development, increased property values, as well as to the quality and vibrancy of a city. Our studies showed that the development and operation of the Dubai Metro system has led to a notable increase in the value of land and properties around the metro stations, ranging from 7-34%.