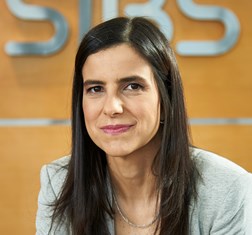 Madalena Cascais Tomé joined SIBS as CEO in 2015. Prior to that, she was director of commercial operations at Portugal Telecom, as well as director for remote channels and online and new channels for SMEs. Before that, she was project manager at McKinsey & Company in banking, insurance, telecoms, and distribution. She was also a renowned consultant for retail banking and strategic marketing. Previously, she joined the business consulting unit at Arthur Andersen/Deloitte. She graduated in applied mathematics at ISEG and has a postgrad degree in market research and CRM from Universidade Nova de Lisboa.

Share on:
SIBS has grown to become the largest fintech innovator in Portugal and one of the largest in Europe within the payment landscape.

How do you see SIBS’ portfolio evolving in the midterm?

SIBS has expanded into other areas that are less typical for a payment processer, namely anti-fraud services. We have one of the lowest fraud levels in Europe, which is due to our strong team and the fact that we developed specialized capabilities in terms of infrastructure. We monitor security issues 24/7 across the payment touch points, which is a unique service. We have also developed a card production factory that personalizes more than 15 million cards every year, the highest in the Iberian Peninsula. We also developed process-outsourcing capabilities related to account opening. We differentiate ourselves in this business through our automation and support structures.

In terms of internationalization, what is your strategy to position SIBS as the payment partner of choice in other markets?

We have also developed and strengthened our international footprint. We started these efforts roughly 10 years ago, and are now present in three of the top five African markets, including Nigeria, Algeria, and Angola. Our largest footprint is in Angola. In these geographies, nationwide payments are processed with our proprietary software. In 2018, more than 330,000 POS terminals with more than 2.2 billion transactions will be processed through SIBS’ proprietary solutions. We have been taking an active part in developing the competencies and core systems of the national payment entities. We also operate in eastern Europe, namely in Poland, where we have been present since 2008. We are growing in this market, growing by 40% in 2017, double the market. This is a core area of growth focus for us, and we want to continue to invest. All in all, we have been delivering on our mission, which is to be the preferred partner in payments with the most innovative, convenient, and secure payment solutions.

How do you assess the company’s financial performance internationally?

We have been growing. We started our international operations in Angola 16 years ago. The European market in particular has been consolidating and accelerating from a set of domestic markets to a broader European one. We want to take part in this progress and consolidation. Our European approach began in 2009 in Poland, and with the recent acquisition of Paytel we took an even larger step in this direction. At present, international activity represents approximately 9% of the company’s operations, and our target is to increase that to more than 15% by 2023.

What does MB WAY reaching the 1-million-user mark mean for the company?

This was an important milestone for both the company and country. This is particularly true when we take into account that more than 65% of these transactions are worth less than EUR25. That we are able to provide such a convenient user experience allows us to develop more digital customers. When we launched MB WAY, there were 700,000 mobile banking users, whereas currently there are about 1.7 million. MB WAY played a major role in developing this base of users and creating new digital habits. We are always evolving, and we recently launched two new features: the ability to request money and split bills. More importantly, we are deploying QR code payments in the POS system. This will allow consumers to have the same experience across different terminals and operating systems and use mobile payments in stores in a physical POS. This is also a more intuitive user experience for customers. In 2019, we will continue to evolve in every way, developing new use cases. It is a growing trend where people only need their mobile phone to bank. We are also developing a new feature that will allow people to interact with the ATM using only their mobile phone. One can already withdraw money without cards; by the end of 1Q2019, users will be able to use any of the same 60 functionalities with their phone.