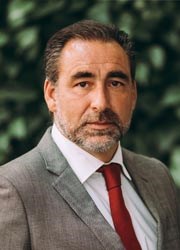 Pedro Amaral Jorge graduated in mechanical engineering at Instituto Superior Técnico and also holds an EMBA with a focus on finance and operations from IESE/AESE. In his previous professional experience, he worked as a specialist in structuring and financing projects in the private sector investment aspect for the African Development Bank (AfDB) focusing on the sub-Saharan region. Jorge has accumulated more than 15 years of international experience, having worked and lived in different markets, especially in Europe, South America, Africa, and the Middle East. He has a total of 20 years of professional experience in top management positions, assuming functions as director of business unit, member of the executive committee, executive director, and CEO in companies such as Mitsubishi, METITO Utilities, Indaqua, Mota-Engil Group, SACYR, SOMAGUE, and IDOM.

APREN is focused on promoting renewable energy deployment in the country and underlining the central role that Portugal can play in this sector in the future.

What is the current scenario and the trends related to renewables in Portugal?

The deployed capacity in renewable energies has increased significantly in recent years, more specifically an increase of 59 % from 2005 to 2021, which demonstrates the investment that has been made in the sustainable development of the energy sector and that shall continue, to achieve the decarbonisation targets for Portugal by 2050. In 2021, we must mention the high increase in installed solar photovoltaic capacity, which increased by 73% YoY. Alongside this increase in renewable power, there was a fall in the installed capacity of technologies dependent on fossil fuels. In addition to the increase in installed renewable power, the country is setting new targets and defining new paths that aim to ensure a fair and secure energy transition to answer to the Fit for 55% and more recently the REPowerEU, which will disclose opportunities on all generation value chain, including decentralized production of renewable electricity through self-consumption and renewable energy communities, energy storage, green hydrogen, and ocean energy technologies. Currently, Portugal has about 63% of its electricity production from renewable energy sources. According to the Portuguese National Energy and Climate Plan (NECP 2030), the target for incorporating renewables into electricity consumption is 80% by 2030, supported by an increase in the deployed capacity of renewable energy technologies, mostly solar photovoltaic (9GW) and onshore wind (3.6GW). However, due to the current situation in Ukraine and the following energy crisis, the Portuguese government, in response to the Commission’s initiative REPowerEU, anticipated the 80% target to 2026, published a Decree-Law to simplify the permitting process of renewable energy projects and announced the intention to hold a capacity auction for offshore wind that will allocate 2-5GW, which is a much higher target than the 0.3 GW pointed out in the NECP 2030.

How is APREN positioned to promote a higher share of renewable electricity in order to support the reduction of CO2 emissions and fight climate change?

APREN’s mission is to promote the deployment of renewable technologies for electricity and green hydrogen generation; support, encourage and collaborate directly with policymakers and government entities to create a sustainable and cost-effective strategy for the renewable energy sector; support, advise, and promote renewable direct and indirect electrification; and enlighten and disseminate the importance and quality of the Portuguese endogenous energy resources. APREN has an important role as the representative of the renewable energy sector near the official entities, working daily to ensure an open dialogue between the various stakeholders and the sustainable development of the sector, having always represented the view and strategy of its members. Considering that Portugal is a privileged country, given its geography and investment in the renewable sector, renewables are already contributing to a significantly greener Portugal. Nevertheless, there are still hot topics that barriers to the sector deployment which APREN works to guarantee that it is always on top of relevant issues to properly find and propose solutions that promote the direct and indirect electrification since it is the most cost-effective way to reduce carbon emissions.

What are the medium-term objectives of APREN, and what are the targets of association set in your 2022 agenda?

In regard to our medium-term objectives, our central goal of promoting the renewables deployment in the country and underlining the central role Portugal can have in this sector remains on the top of our priorities. Given the actual context, where it became even more urgent to not only diminish all climate impacts but also to create an energy independent Europe, we intend to do so by maximizing renewable energy deployment on our national energy mix, following the key topic that currently constitute the main blockades such as an adequate and resilient network and energy integrated systems, market and regulatory stability, energy literacy across the society and adequate knowledge creation and human resources training to complete all tasks mentioned.