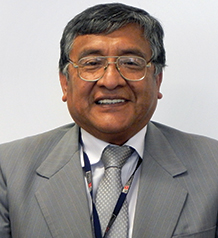 Picking Up The Signals

Luis Andrés Montes Bazalar was working in the education sector when the Ministry of Transportation and Communication approached him to lead the office handling the development of new IT infrastructure. He took over operations of the organization in January 2012.

Share on:
TBY talks to Luis Andrés Montes Bazalar, Technical Secretary of the Fund for Investment in Telecommunications (FITEL), on IT connectivity in Peru, challenges facing the sector, and increasing IT inclusion.

What is the current status of connectivity and IT infrastructure in Peru?

All large-scale projects as IT infrastructure across the country require estate policies to back them up. In 2008, we saw many state policies come to a halt and that had an impact on universities and other such centers. I have been an active promoter at all levels of implementation of fiber optics in the country for a long time. It has been a long and slow process that started when we implemented the much-needed broadband regulation in the sector, which gave the country and FITEL the necessary legal framework for the implementation of this and other projects. FITEL has played an active role in the development and implementation of the main regulatory framework in the sector as well as its key projects.

What have been the landmark achievements in the sector since the implementation of the backbone fiber optic network?

We built a 13,500km national fiber optic network, which feeds as many as 180 capital cities throughout the provinces. This network was developed alongside Peru’s logistics corridor. We hired external consultants to analyze the backbone network and corridor that we developed. Among the main benefits of this network are the development of capillaries, the provision of high-quality cable TV services to Peruvians, the capabilities of the network in its own right, and boosting the IT sector. We have seen many positive developments in e-health in the remote regions of Peru, which has saved time and money for many rural Peruvians. We are also part of a national committee to develop and implement the guidelines for the development of Peru’s e-health sector.

What are some of the main challenges the sector faces?

There is a lack of trust by the national authorities in IT specialists. We are creative and innovative, but the public authorities prefer foreign expertise when it comes to innovation, despite us having proven our value. The national backbone fiber-optic network is a local project and we tested a small-scale project in Silicon Valley with Cisco. However, having said that, we also face a challenge in terms of human resources; we do not have enough qualified telecommunications engineers.

In 2013 only 10% of rural inhabitants were connected to the internet. How do you promote and ensure homogeneous national coverage across the country?

We have always aimed to provide the network with high levels of capillarity and in this context there are as many as 21 regional projects linked to the main network. Four of these projects are already under way, and nine projects were approved in 2016. The remaining ones will hopefully be implemented during the next government. We believe that e-health developments should be mirrored in education, security, production, and other key sectors. This also means training our companies in content. We have foreseen the construction of a demand aggregation center, which should help to boost pilot and test projects.

What are your main priorities?

The first priority is an online state television network that will be made available to the entire country, showing all open channels and university channels as well as other public channels. Another project has to do with the development of an emergency network to better understand the needs of our people in case of severe climate conditions such as tropical storms or hurricanes. In this context, we want to centralize all emergency services through a single telephone number. Overall, regional projects linked to the national network are key for 2016, and the government has allocated as much as PEN440 million (USD128.3 million) as part of the budget for the Ministry of Transport and Communications for the implementation of these projects. Another goal is for Peru to have its own communications satellite in the near future.