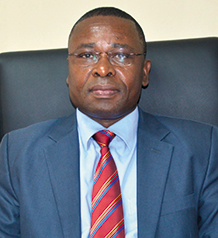 With an academic background in Economics and Agricultural Business Management, Lourenço Sambo has been the Director General of CPI since 2010. He was previously the Economic Adviser to the Minister of Planning and Development, and also taught math-ematics at Maxaquene Secondary School, as well as politics, economics, mathematics, and statistics at the Maputo Commercial School from 1979 to 1984, and public finance at the School of the National Planning Commission. In 1996, he was the Financial Manager of the Maputo Development Corridor, a World Bank-funded project for the restructuring of the CFM-Mozambique Railway Company.

Share on:
TBY talks to Lourenço Sambo, Director General of the Investment Promotion Centre (CPI), on creating services for foreign companies, key projects under development across the nation, and the ever-improving business environment.

What are the most innovative services that you have created to support new companies entering Mozambique?

First of all we had to establish ourselves in each of the country’s 11 provinces to widen the scope of our institutional assistance to investors, and secondly we had to equip our institution with appropriate human and technical resources. These were the most important steps that we have successfully taken. Thirdly, we had to improve our relations with other institutions involved in the process of attracting investment, as well as with relevant government ministries who have a strong say in the process of investment approval, such as the Ministries of Agriculture, Interior, Labor, Environment, Finance, and Mineral Resources. The government also recently approved a new investment promotion strategy to be implemented over the next three years, which is expected to substantially increase the investment flow into the country.

What are the most common concerns of and challenges faced by international companies upon entering the market?

I would identify the rather limited development of basic infrastructure in rural areas, as well as a low level of scientific literacy and professional training, inadequate electrical power distribution, and susceptibility of certain productive processes to international price fluctuations.

What would you say are the most significant large-scale projects set to take place in the country in the near future, and how will they impact the broader economy?

One of the largest forthcoming investment projects is the LNG plant set to cost some $30 billion. This project is to be developed in the Rovuma basin, in northern Mozambique, with the first exports due to start in 2018. There are other large-scale projects associated with gas exploration in the Rovuma basin, such as setting up a container terminal, a pipe-coating plant, a shipyard, bunkering, an LNG receiving terminal, a fertilizer plant, and gas to liquid (GTL), and dimethyl ether (DME) facilities. In addition, CPI recently approved investment projects worth more than $7 billion, mainly in hydro, coal, and gas power plants. The investment will also cover the development of the northern ports of Pemba and Palma, where a giant logistics base and LNG production plants are planned, which will use gas produced from offshore fields in the Rovuma Basin being developed by US oil major Anadarko Petroleum Corp and Italy’s ENI. These projects will have a major impact on the entire economy directly or indirectly through their contribution to GDP, and the creation of employment, especially in Pemba and Palma. Moreover, Mozambique will enjoy much higher international visibility as one of the most important producers and exporters of natural gas. Mozambique’s economy is already growing at 7.5% annually. In the medium term, as a result of the LNG plant and other megaprojects in the mining sector, the economy is expected to see acceleration of 9%, or even 10%.

What sectors and regions have you identified as having the greatest potential for growth?

Each of the three main regions of the country—the south, center, and north—are prime investment destinations. The sectors with the greatest potential include agriculture and agro-industry, construction and public works, mineral resources and energy, services, transport and communications, and tourism.

How would you describe the current business environment in the country?

It is healthy, as we remain one of the most stable countries in the region, both socially and politically. Dialogue in our society is the order of the day. All institutions mandated to assist investors are functioning properly and in concordance with laws in force in the Republic of Mozambique, and in a well-coordinated manner. Legal instruments have undergone major reforms. These include business licensing, fiscal, investment, and labor laws. And meanwhile, infrastructure such as ports and railways, energy and water supply, roads and bridges, telecommunications, and airports are being upgraded.