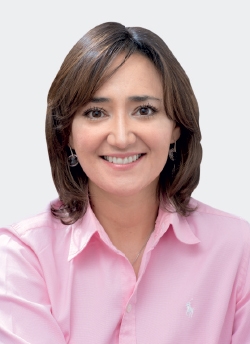 Holding a Master’s degree in Law from Georgetown University (Washington, DC) and a lawyer with over 20 years of experience, Marcela Vaca Torres has worked for prestigious companies in the energy and mining sector including ECOCARBON, Morgan Meguire, GHK Company Colombia, and Hupecol, prior to her move to GeoPark, where she is currently the General Director. Her extensive experience as General and Legal Manager at various companies in Colombia has allowed her to lead the management of business groups such as Hupecol Group, as well as projects that develop high-impact relationships with private and public partners (Ecopetrol S.A.) An academic career has seen her participate as visiting and adjunct professor at a number of accredited universities.

Share on:
GeoPark has a history of rapid growth in Latin America. What does Colombia represent for your regional operations? We started in Colombia two years ago by purchasing three companies. Today […]

GeoPark has a history of rapid growth in Latin America. What does Colombia represent for your regional operations?

We started in Colombia two years ago by purchasing three companies. Today the operation accounts for over half of the company’s overall production. Colombia accounts for at least 40% of our EBITDA and reserves, and all eyes are on this market and our rapid growth in it. GeoPark has 400 employees, of which 130 are in Colombia. It is a small team compared to our current activity level.

GeoPark entered the Colombian market through the acquisition of Winchester Oil and Gas, La Luna, and Hupecol in 2012. How would you evaluate this process?

The negotiations were simultaneous. The Winchester and La Luna acquisitions were closed in February 2012, and Hupecol’s one month later. I witnessed the challenge and the success of merging various companies, cultures, and teams. Finally we put together a strong team in a highly competitive market. GeoPark acquired 10 blocks, four of which we operate. Those blocks are in the department of Casanare, while the others are in Magdalena, Catatumbo, and also in Casanare.

What are your seismic and drilling plans for the remainder of 2014 and 2015?

We have no plans to pursue further seismic activity for the time being. GeoPark acquired approximately 1,500 square kilometers of seismic data during 2013, with 350 square kilometers in Colombia. Our 2014 budget includes the drilling of 18 to 23 wells, some of which will be drilled contingent upon results. As of June 30th we had drilled 12 wells and are confident of meeting our yearly drilling target. We are still working on the 2015 plan and budget, but I would expect an active drilling program.

How much production are you expecting for 2014?

As of December 2013 we had increased production in Colombia by 20% and our reserves by 23%. Today we are producing nearly 20,000 gross barrels per day (bbl/d); for the second quarter of this year production is up 68% in comparison with the second quarter of 2013. This increase is mainly a result of the new discoveries in the Tigana, Tigana Sur, and Aruco fields in the Llanos 34 Block, as well as the development and appraisal of the Max, Túa, and Tarotaro fields. GeoPark operates with a 45% working interest (WI).

What do you think the public and private sectors must do to overcome challenges in the industry like infrastructure and the delays in obtaining permits?

Infrastructure includes both roads and pipelines. With respect to roads, national and regional authorities are currently working on programs to improve certain roads and build new ones, but these are, in most cases, not roads leading to our fields. Infrastructure efforts should be led by the public sector. However, as active members of the communities, we are investing significant resources in maintaining the regional public roads we use. Regarding pipelines, we believe this effort should be left to the private sector, either producers or midstream companies. This however, still requires considerable government support.

What opportunities does Colombia offer for further investment in the energy sector?

Legal and political stability are important factors for a good investment environment. We still have aspects to improve as a country, and here I speak as a Colombian, but that is just a natural part of growing pains. The country has demonstrated steady growth year after year in an improving environment, which I believe is always a good sign for investment.

How do you envision the future of the energy sector in Colombia, and what role will GeoPark play in shaping it?

Colombia urgently needs more discoveries; large and important ones that would allow it to replenish national reserves. For that purpose, it needs to improve the environmental permit process and recognize and support the industry’s efforts and investments in the regions that we work in and with our communities. GeoPark is deeply committed to Colombia and its regions. This is why we will contribute to expanding the national reserve base, in working closely with our communities, in having an environmentally committed operation, and in working jointly with the authorities to strengthen the overall process.