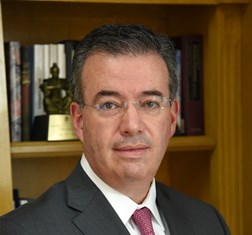 Planning for the Future

Alejandro Dí­az de León-Carrillo earned his BA in economics from ITAM and received the Miguel Palacios Macedo Award for academic excellence. He has a master’s in public and private management from the Yale School of Management. He has held a variety of positions in the public sector including General Director of the National Pension Fund of State Workers (PENSIONISSSTE) and the Debt Management Office in the Ministry of Finance.

Share on:
In addition to focusing on macroeconomic policies, Banco de México is also focused on a payments system that will increase the number of banked Mexicans.

What are the main factors impacting GDP growth in the country?

We lowered 2019’s growth forecast, but kept the same range for 2020’s. In 2019, the deceleration of growth was a little more than anticipated. There have been logistical issues regarding gasoline distribution, certain railways not operating as they usually do, strikes in the northeast, some elements that made it a little harder to move items across the border, and transitory effects related to changes in public spending with a new administration. These appear to be of a transitory nature, however, and we expect GDP to recover in the second quarter and beyond. That said, there is also a balance of risk skewed on the down side, so we do see more risks associated going down, which is why we amended our growth forecast for this year.

What explains the peso’s recent performance?

In the last few years, the external accounts have faced a significant transformation, and Mexico has gone from being an oil-exporting economy to an oil-importing one, which entailed challenges regarding the external accounts that required a significant real exchange rate depreciation of the peso. We need to have a strong macro mix in order to cope with these challenges and have an orderly adjustment in the economy. This includes a tighter fiscal and monetary financial system and using the FX as a shock absorber. That has been the item of the macro policy mix for the last few years. In 2019, we have seen both internal and external uncertainty, while trade tensions have also heightened FX volatility. Emerging market currencies have been more volatile due to trade tensions; considering Mexico’s openness and the relevance of exports to the US, bilateral issues are important for FX.

What challenges has the Mexican economy faced in the last few years?

There was a change in the oil trade balance from a surplus to a deficit in the last four years, which required a major adjustment in the economy. It is always hard to gauge the position of the economy in the business cycle, especially in emerging markets, because we are subject to other types of shocks both external and internal. In our most recent monetary policy communiqués, we have highlighted that economic activity has declined more than anticipated, and inflation has not fallen as quickly as expected. There are several elements pressuring inflation related to increasing energy prices and some services’ inflation related to recent increases in wages. As we go forward, we will have to gauge GDP dynamics and the cyclical position of the economy, as well as potential supply shocks that have affected inflation and see what they entail for our inflation forecast.

What have been the main advancements of your digital payments platform CoDi?

The payments system is one of the areas of responsibility of the Central Bank. We not only seek low and stable inflation but also a sound financial and payments system. We are a different central bank in that we provide both the large value and a retail payment system. As providers of the latter, a mobile-to-mobile payment system is feasible and the logical next step for our network. We have an RTGS payment system; it works 24/7 every day of the year, which is a significant step to allow for these mobile-to-mobile networks. These are based on QR and NFC technologies, so any Mexican with a smartphone and a bank account or a financial institution account can pay or receive payments at any time using either QR or NFC technology. We have more than 30 million Mexicans with smartphones but without a checking account or other financial services. In order to use this new payment technology, they will have a strong incentive to open an account with a financial institution, which will not only allow them to use CoDi as an agile payments system, but also give them access to higher value-added financial services.