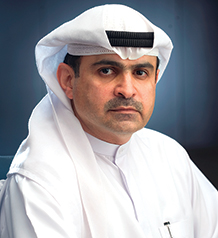 HE Sami Al Qamzi was appointed Director General of the Department of Economic Development in September 2008. Before this, he held the position of Director General of the Department of Finance where he worked directly with the Ruler’s Court and Executive Council of Dubai to develop strategies for the Department of Finance. He began his professional career with the Central Military Command of the UAE in 1986 in a financial administrative role. He holds a BA in Economics and Accounting, and is extensively involved in business and industry through his board affiliations.

Share on:
TBY talks to HE Sami Al Qamzi, Director General of the Department of Economic Development, Dubai, on attracting investment, the Mohammed bin Rashid city, and falling oil prices.

How would you characterize Dubai’s overall economic performance in 2014?

We expect about 4% GDP growth for the whole year. This is a good performance given the unfavorable international environment, particularly in EU and emerging market economies, including China. The sharp drop in the price of oil has had an impact on tourism and related activities compared to the same period of 2013, yet the number of tourists has increased by about 5.5%, which is higher than the growth in international tourism. In addition, foreign trade has been affected to some extent by the sharp rise in import duties on gold bullion and jewelry in India, a major trade partner for Dubai. Manufacturing performed well with more than 6.5% growth value added. Another sector that experienced a strong rebound is construction and real estate with more than 3.5% growth value added, against less than 2% in 2013 and negative rates in earlier years. Transportation was also a vibrant sector, particularly air transportation where Emirates airline continued its stellar performance with more than 13% increase in passenger numbers between 2013 and 2014. Against this good performance, we should also factor new inflationary pressures that Dubai experienced in 2014, with the consumer price index rising over 4.2% by the end of the year after several years of quasi price stability, essentially due to rising housing cost.

What ongoing government projects or initiatives will have the most profound impact on Dubai’s ability to attract investment going forward?

The largest megaproject by far is the Mohammed Bin Rashid City, a multi-billion dollar mixed-use development with the main components expected to be complete by 2019. It will include a park, larger than London’s Hyde Park, with a capacity to host more than 35 million visitors annually. This park will also accommodate 100 new hotels. A second component will be a large retail space and a new shopping mall—the largest in the world—designed as an extended retail street network. A third component is a cultural district with a large area for art galleries, expected to be the largest of its kind in the MENA region. In addition, 1,500 luxury villas featuring Arab and Mediterranean design will surround the green heart of the city. The Expo 2020 site is another multi-billion project that Dubai is committed to complete a year ahead of the event. Extending over 438 ha, it will include 180 pavilions and an underground rail network. In addition, Dubai’s metro network will be expanded and connected to the Expo site. Other transportation and logistics projects, such as an additional metro line and the expansion of Dubai World Central, are also to be carried out in phases and completed before 2020.

How is Dubai’s economy positioned to endure the decline in the price of oil?

The direct effects of the sharp drop in the price of oil since the last quarter of 2014 are limited, as oil accounts for less than 2% of Dubai’s GDP and less than 12% of total government revenue. The indirect effects may have stronger repercussions on Dubai’s economy. On the positive side, economic activities that are energy-intensive, such as air transportation, will benefit from the drop in oil prices. Emirates airline, for instance, is expecting a sharp rise in profits for the year 2014-15, partly due to favorable trends in energy cost, which accounts for more than 30% of total cost. DEWA, the electricity and water company, may be another beneficiary of the drop in energy prices. As for tourism and related activities, on the one hand, the purchasing power of oil-importing countries will be higher and travelling cheaper, while the flows of tourists from oil-exporting countries may slow down. In addition, recent trends in exchange rates may slow down tourism, particularly from euro zone countries. The drop in oil prices may also influence investment in real estate, as a large number of investors are expatriates such as those from Saudi Arabia and Russia. However, this impact may be salutary for Dubai’s economy, as it will reduce speculation and cool down the real estate market. The best way to shield Dubai from the negative repercussions is diversification, which has been the foundation of the city’s development. As Dubai’s economy has displayed a great deal of resilience to other external shocks, it continues to seize opportunities for further diversification and stabilization.