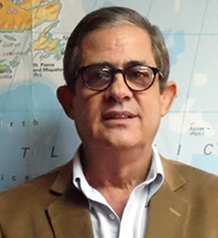 The General Manager of the National Banana Corporation (Corbana) since 1994, Jorge Sauma has been reelected to said position five times and manages a budget of more than USD5 million annually. He personally helped manage trade negotiations with the EU that led to the successful implementation of the Association Agreement regarding banana exports to Europe in 2010. He is a graduate of the University of Costa Rica and the National Agricultural College in Deventer, the Netherlands.

What role does Corbana play in supporting the banana production industry in Costa Rica?

Corbana is a non-state public institution working on the development of national banana production by strengthening growers and the production and marketing of bananas. We began in 1971 and focus mainly on research but also give loans and have labs for soil analysis and other services. We also provide climate information through Banaclima Corbana, with 70 stations where we issue information to the growers daily.

What factors contribute to the viability of Costa Rican bananas in the global marketplace?

Of course, the taste and look of a banana is important; however, it is more important how it is produced, and the social component of that related to the workers. We try to give our workers the best conditions possible, maintain a strong adherence to the best environmental practices, and mirror global standards such as those of the EPA in the US. Moreover, we try to reduce the application of chemicals in production. In 2017, we celebrated the 10-year anniversary of the construction of a laboratory for biological control and molecular biology. About 75% of our research is dedicated to biological control.

The industry is facing challenges such as fungus and climate change. What are some other concerns, and what is Corbana doing to contribute towards a remedy?

The main challenge is trying to remain competitive whilst upholding strong social conditions for workers and environmental efforts. We offer higher salaries to workers than producers in competitive countries, and to offset this we work to keep up our productivity. Costa Rica has the highest yields in the world. We have reached already 2,800 boxes or 18kg per hectare. This higher productivity is the way to compete and maintain good conditions for our workers and environmental practices. Another challenge faced not only by producers in Costa Rica but worldwide is fusarium, a fungal disease. The industry has organized an international congress in Miami where well-known scientific researchers from five continents were invited to discuss the matter. We have also partnered with a large German company to develop a bio-solution to this disease.

How are you trying to reach new markets?

Traditionally, our main exports are almost 50% to the US and about 50% to the EU. We also have fruit going to the Middle East, Japan, and so on but in small quantities. We are trying to reinforce these markets in an attempt to export more. Logistics play a large role in this; therefore, we are working on this challenge. It comes down to distance and preservation. The industry is structured by trade companies like Del Monte and Chiquita, and our banana growers produce on 45,000ha, which is less than 1% of Costa Rica’s total territory and close to 25% of the total area devoted to banana production. Most banana growth takes place on the Caribbean side, although there are three farms in the South Pacific.

How will growth in the logistics sector help as you tackle your logistics challenges?

Agriculture and marketing were a topic within a recent congress. There were people from the Panama Canal and APM Terminal. We realized with this port we can compete, otherwise it would be difficult as facilities were not the best. New facilities will help the entire sector, not just bananas.

Has Corbana worked with any technology firms to improve production efficiency?

We have drones and an agreement with the University of Costa Rica for research purposes as well as the use of its technological equipment. We also have agreements with universities in Taiwan, the Netherlands, the US, and elsewhere. Innovation is the only way to compete and improve. We also have close relations with the Ministry of Agriculture, Ministry of Trade, and Ministry of Foreign Relations. Out of necessity we are, in a way, a combination of a private firm within the public domain, a public-private partnership.