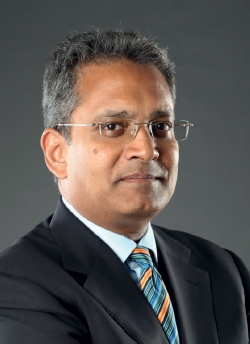 Paddy Padmanathan, a Civil Engineer with over 30 years of experience, has served ACWA Power since 2005 as the company grew, from a start-up. Today, it is a leading private developer and operator of power and desalinated water production plants with a paid up capital of $1.4 billion that now operates in eight countries with a portfolio of plants worth $23 billion. He is a graduate of the University of Manchester, UK, and started his career as a consulting engineer delivering infrastructure projects. Padmanathan then moved on to develop privately financed power, water, and wastewater projects.

Share on:
How has ACWA Power leveraged its position to get where it is now? ACWA Power was founded pursuant to the policy adopted by the government of the Kingdom of Saudi […]

How has ACWA Power leveraged its position to get where it is now?

ACWA Power was founded pursuant to the policy adopted by the government of the Kingdom of Saudi Arabia in 2002 to open several sectors of the economy for private ownership and operations, including the water and power sectors. The two initial shareholders of ACWA Power were Abunayyan Group and AlMuhaidib Group. They saw this as a unique opportunity to get involved in a broader value chain, but recognized that it was a completely different type of business and needed, therefore, to have its own new enterprise that over time can become a sustainable long-term business with a balanced portfolio. ACWA Power was founded specifically with the objective of doing nothing else but to develop, invest, own, and operate power generation and desalinated water production plants. The aim was then to sell the product on a long-term bulk supply basis to credit-worthy off takers. We are not a traditional utility company in the sense that we do not sell to retail customers; however, we are a bulk service provider. The first transaction that we tendered ourselves we won, which was unusual in itself. We then went on to win the first five in different configurations, and these are extremely large transactions. The sixth was canceled mid-procurement. Of the next five tenders, we won three and lost two. Today, the plants we own and operate generate 12% of the electricity and about 48% of the desalinated water produced in this country. We have another 30% of the Kingdom’s power generation capacity currently under construction.

Could you briefly characterize the potential for renewable energy solutions in Saudi Arabia?

The reality is that given where renewable energy prices are today with costs having come down significantly, without thinking, we should be moving 15% of our load to renewable energy as it is the most competitive solution to provide for this segment of the load when fossil fuel, which is the alternative, is priced at market prices. We are blessed with a situation where we do not even need to shut any existing fossil fuel power generation plant to then use renewable energy as an alternative and thus factor this additional cost into the equation, but of course we need to shut down and replace the rapidly growing old fleet, which is extremely inefficient, and, thus, produces low power output compared to the amount of fuel that is put in. Our demand is growing; hence, instead of continuing to build fossil-fueled new capacity, we should simply build renewable power plants at least till the peak load segment is fully served by renewable energy. Right now, we have 1,400 MW of gas turbines that are fueled and even in some instances are fueled by oil, which is even more inefficient. This should be the first segment that should be switched to renewable energy.

How are you able to finance your business?

There is a significant pool of money out there in the Islamic financing market. In order to generate more investment and free up and refinance assets more efficiently, we will utilize the sukuk market in due course. While we were founded by three private sector shareholders, and a few years later we were joined by five others, from day one we recognized that providing water and electricity even in bulk to state-owned utilities or large industrial consumers is still very much an activity that will attract the attention of the public given its fundamental significance to the social and economic development of communities and countries; hence, we will in time also come to further widen that ownership to progressively include the public sector and ultimately the public at large. In 2013, we brought in two public sector agencies, a subsidiary of the Sovereign Wealth Fund of Saudi Arabia and the Public Pensions Agency as shareholders. Then, in 2014, we will broaden the shareholding to include the International Finance Corporation, the private sector affiliate of the World Bank, and in time to come we will further broaden the shareholding base to ultimately fulfill our objective of having the most diverse shareholder base possible. By adding all these new shareholders, we have continued to issue more share capital, which has, therefore, continued to add to the cash we have available as a company to utilize and grow our asset platform.