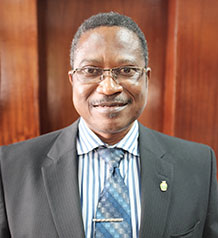 Oladele Amoda obtained a Bachelor’s degree in Electrical Engineering from Memphis State University in the State of Tennessee, a Master’s of Business Administration (MBA) from the University of Science & Technology, Enugu, and an eMaster of Science (MSc.) degree in Electrical/Electronic Engineering from the University of Lagos, Akoka in 2002. He joined the PHCN, the National Electric Power Authority, and was later posted to Akure District as Planning Engineer. He was promoted to the position of Head and later Assistant General Manager, Technical Services, a position he held up till August 2011, when he was appointed as CEO of Eko Distribution Company.

Eko was privatized along with the rest of the distribution sector in 2013. Can you talk about what has changed since the company was privatized?

When we took over in 2013, the network was dilapidated due to inadequate investment. Up to that point, the sector was under government control, and had not seen the investment it required for over 30 years. When we took over, we had to evaluate the network and assets that we purchased as prior to privatization, investors had lacked this opportunity. Our evaluation was in essence like a black box, revealing the poor condition of existing infrastructure. We quickly raised $250 million to ramp up the existing network to such that we could distribute electricity to our customers. When we looked at the total customer outlay, it turned out that 50% lacked meters, and among the other 50%, meters were obsolete, or not in working order. We are now investing in meters with a clear focus on the customer, who does not favor estimated billing. This year, Eko is spending over NGN20 billion on meters alone to replace the entire system for its 400,000 customers. We also have high-consuming industrial and commercial customers, numbering around 6,000-7,000. Those entities consume over 40% of our energy and, paying more, are the current focus of our metering efforts. We want to make sure that no one is cheating the other, and that everyone has a functional meter that they are comfortable with. This way, whatever bill we give our customers, they will be satisfied with.

How has gas supply affected your distribution efforts?

We are not getting enough power from the grid because of an inadequate gas supply to the generators, brought about because of vandalism to the gas pipeline, which has reduced the level of generation throughout the country. Also, the cost of gas for power generation is low compared with gas sold to the rest of the market. Gas suppliers naturally favor higher price bracket customers. The government has moved on this, having increased the cost of gas per unit. It is ready to supply gas if the pipelines are renovated. And as far as the grid is concerned, there is a sharing formula where everybody gets a percentage of what is generated. For instance, at Eko, we have 11% of whatever is generated on to the grid. What we require today is a minimum of 700MW. But we only receive on average 300MW, or even below 200MW. For a number of months we have received a daily allocation in the morning of not above 300MW. Our supply tends to dwindle in the afternoon, as there is insufficient gas for the generators. We allocate based on what is available to us, but Eko cannot continue to operate like this, and is seeking a complimentary source of power for its network. Now, we are encouraging private companies to set up generation plants the output of which would be sold to us for addition to what is available on the existing grid. Such embedded power is not subject to grid intervention. We have been working on this for almost nine months now. A total of 43 companies have indicated a willingness to set up plants of various capacities and in assorted locations. These companies should provide an additional 400MW, though it will be gradual process as equipment needs to be received and installed. Currently, Eko has almost completed a bilateral power agreement with existing power plants that are not tied to direct agreements. We have almost concluded an agreement for an additional 100MW, which will probably materialize before June. Secondly, a further three companies have 40MW ready for supply once all MoUs are signed. In total this year we are looking at an extra 170MW.

Will those embedded generators impact the final costs to your customers?

There will be a premium, but we will be able to guarantee power. This will benefit the customer, because all demand will be met.

How many hours of power are to be provided per day once the 170MW comes online?

Right now we are providing power for between 12-15 hours a day. We should be able to increase that to 18-20 hours a day. And as more companies get set up and sell us energy, we can increase the number. In the future, generation for the grid will be more stable. Bear in mind that there are 10 IPP power stations currently being commissioned. By the time those come on stream (their total output is 4,500MW) there will be thousands more megawatts added. And then there are privatized power stations that are also increasing capacity. So the future is bright for the power industry in Nigeria and customers merely have to exercise some patience. Very soon we intend to light up Lagos.

In addition to the 250 million invested in the network there are some other funds. For example we recently received a Central Bank of Nigeria (CBN) intervention. This money is being ploughed into addressing network problems. And beyond the network itself, we are looking to enhance the workforce. We want to retrain our workers and recruit more technicians, as well as invest in an electricity management system that enables the automation of our activities. This will make jobs easier and allow us to respond faster to customers. Currently, we are in a period where owners are investing, rather than looking at profits. The massive investment this involves means that five years from now, we will have proven to the public the capacity of the private power sector to work effectively.